Moving Down the Tracks 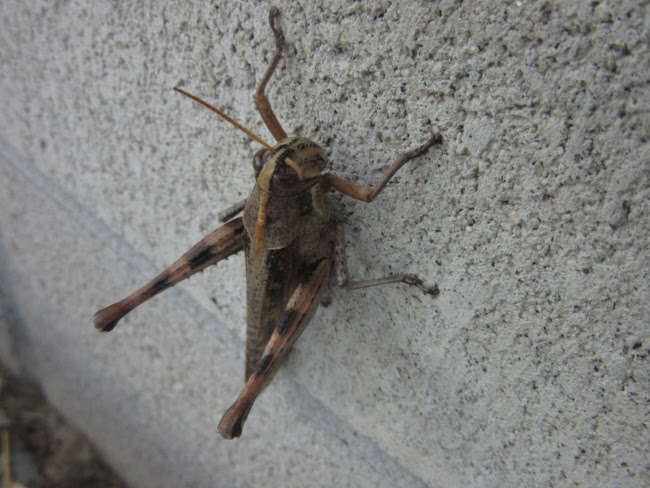 Here's a big beautiful grasshopper from the trolley station a few days ago. With my fingers for scale: 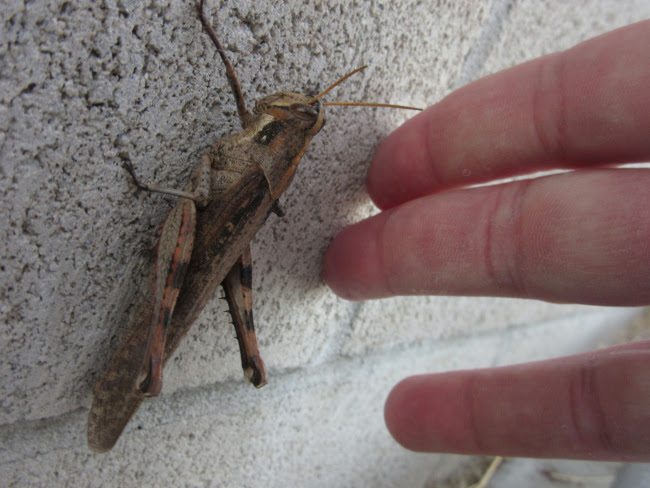 Nearby, some birds bathed in the dirt: 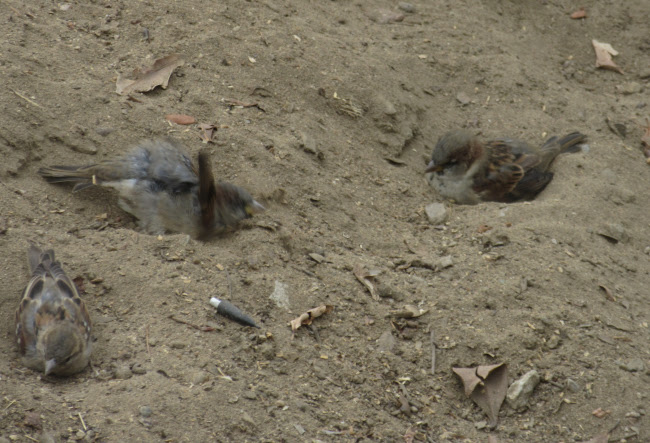 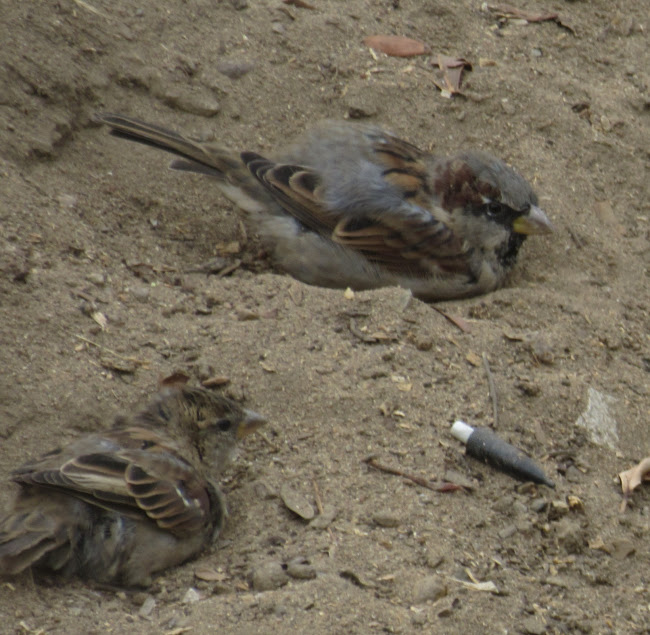 In addition to saving money on gasoline by taking the trolley, it's a much safer way to read and travel at the same time (not that I've tried reading and driving). Yesterday I finished reading Le Pere Goriot, an 1835 novel by Honore Balzac, part of a series by him called La Comedie Humaine. It's a novel both lovely and terribly insightful. I haven't read much French literature so I don't know how many trends it shared with Britain and the U.S. but the attitude of the novel seems much in line with the anti-romanticism of Poe or Melville while at the same time it has a great appreciation for aesthetic beauty.

During the day a glimpse into the garden is easily obtained through a wicket to which a bell is attached. On the opposite wall, at the further end of the gravelled walk, a green marble arch was painted once upon a time by a local artist, and in this semblance of a shrine a statue representing Cupid is installed; a Parisian Cupid, so blistered and disfigured that he looks like a candidate for one of the adjacent hospitals, and might suggest an allegory to lovers of symbolism.

Well, that's a sort of ugly beauty. The novel mostly follows a young law student named Rastingac who quickly abandons his career when knowledgeable people around him impress upon him the importance of moving up in society. Among the colourfully and insightfully described inhabitants of the boarding house where Rastingac stays is the Pere, or Father, Goriot of the title who, despite living in poverty, has two daughters who dwell in the high society of Bourbon Restoration Paris. Here Rastingac meets one of the daughters, who is a Countess by marriage:

Rastignac turned abruptly and saw her standing before him, coquettishly dressed in a loose white cashmere gown with knots of rose-coloured ribbon here and there; her hair was carelessly coiled about her head, as is the wont of Parisian women in the morning; there was a soft fragrance about her—doubtless she was fresh from a bath;—her graceful form seemed more flexible, her beauty more luxuriant. Her eyes glistened. A young man can see everything at a glance; he feels the radiant influence of woman as a plant discerns and absorbs its nutriment from the air; he did not need to touch her hands to feel their cool freshness. He saw faint rose tints through the cashmere of the dressing gown; it had fallen slightly open, giving glimpses of a bare throat, on which the student's eyes rested. The Countess had no need of the adventitious aid of corsets; her girdle defined the outlines of her slender waist; her throat was a challenge to love; her feet, thrust into slippers, were daintily small.

In here you see a combination of Balzac's tendency to carefully describe the beauty of Parisian fashion and his tendency to make assertions about human nature through character description. I can imagine this being an annoying tendency from anyone less insightful than Balzac. But generally when he says something like that I found myself saying, "Yes, he's right" or at the very least, "Maybe so." It's half novel and half psychological philosophy text. Here he talks about the landlady of the boarding house after she's discovered a man she was attracted to isn't quite the catch she thought:

Mme. Vauquer's aversion was naturally more energetic than her friendship, for her hatred was not in proportion to her love, but to her disappointed expectations. The human heart may find here and there a resting-place short of the highest height of affection, but we seldom stop in the steep, downward slope of hatred.

Balzac has his version of the Byronic or Satanic hero--or his embodiment of his criticisms of the Byronic hero--in a charming, ruthless gentleman named Vautrin. I couldn't help thinking of Paradise Lost when Balzac describes him as, "like a fallen archangel who is for war to the end."

Vautrin isn't quite the full fledged anti-Byronic hero like Captain Ahab--he's permitted some genuine insight and one realises he may simply be a more talented version of a very common individual in Parisian society. Vautrin becomes a contrasting father figure to Goriot whose unfaltering devotion and self-sacrifice to his daughters is more than once explicitly described as Christ-like. But increasingly, as the novel goes on, and so you almost don't notice it, the real god, money, exerts stronger and stronger influence until in the last portion of the novel no basic human consideration is sacred enough to forestall a trip to the pawnbroker. I kept thinking of Mikio Naruse's films and his characters who are always ensnared by a world that demands money at every turn and how Naruse said that whenever his characters try to move just a little bit they hit a wall.

A curving bow beneath the jaundiced throat;
The duster brows above the squinting smirk;
So he was known by cracking leather bloat,
Manured hay, his wig goes to its work.
Balloon he was above his own parade.
The eggy man appraised without his mind.
Like cells, the sugar clogs his lemonade.
He's but a clone from mouldy orange rind.
The secret sheen upon the blazer dripped.
In swinging thoughts, a dang'rous tunnel gnawed.
From green old copper cups his skin has sipped.
A script of barren sand lay in his awe.
His burger face jammed up the microscope:
Two raisins sank in rotten cantaloupe.