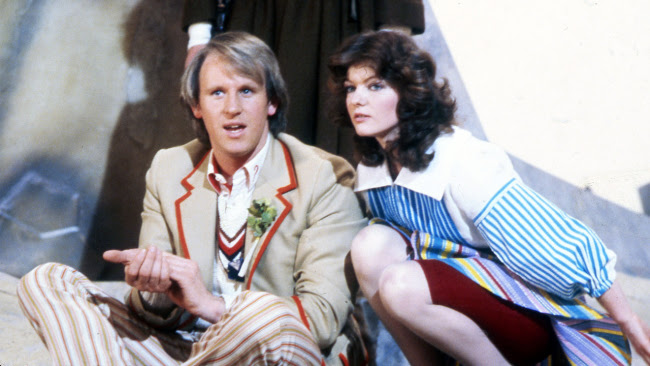 It seems the Fifth Doctor had a harder time keeping his TARDIS together than the others. The entertaining 2008 audio play Time Reef involves much of the TARDIS interior being stolen and sold off by the Victorian street urchin Thomas Brewster, introduced in the earlier audio play The Haunting of Thomas Brewster. The Doctor is travelling only with Nyssa at this point, which places it well before the serial Frontios where the Fifth Doctor's TARDIS was torn to pieces and scattered underground.

Time Reef begins with Nyssa (Sarah Sutton) trying to cool the Doctor's (Peter Davison) temper at finding various little things out of place on the TARDIS after getting it back from Brewster (John Pickard) at the end of The Boy That Time Forgot. It turns out the Doctor has even better cause to be angry than he thinks when they're forced to land in some kind of trans-dimensional island where another crew is shipwrecked, a crew to whom Brewster had hawked whatever wasn't nailed down inside the TARDIS.

I liked that Brewster doesn't just turn out to be another good kid. It's what I always liked about Turlough, that there are things about him that are genuinely not nice. In this story, Nyssa talks about how her people on Traken make an effort to be reasonable with everyone and the story plays with the idea of how much unvarying pacifism can be practicable. This is another nice example, too, of the audio plays keeping Nyssa's character history in mind when writing for her.

Nyssa even reasons with a deadly Ruhk in Time Reef, its appearance as an antagonist to the shipwrecked crew of mercenaries making the story an entertaining reference to One Thousand and One Nights.

The events of Time Reef lead into a shorter audio play, A Perfect World, which is a funny little romance with a genuinely creepy, alternate, "perfect" version of 2008. Both stories were written by Marc Platt.

A travel bag betokens climes of sack.
Unknown the plateau spits the cacti pin.
Communed with ears leftover late of tack.
A social nine convened inside the den.
A vague dispatch concerned a vaulted dome.
In leather clouds announcements stuck to air.
The bicycle advanced through crops to home.
And then upon the desk there's just a pear.
Secreted in the drawer a cane abides.
Assisted walks revert to chairs and book.
A murder now to quiet cans the sides.
A country field affords a simple look.
Napoleon is knitting Satan's socks.
They're never short on time who've surfeit clocks.