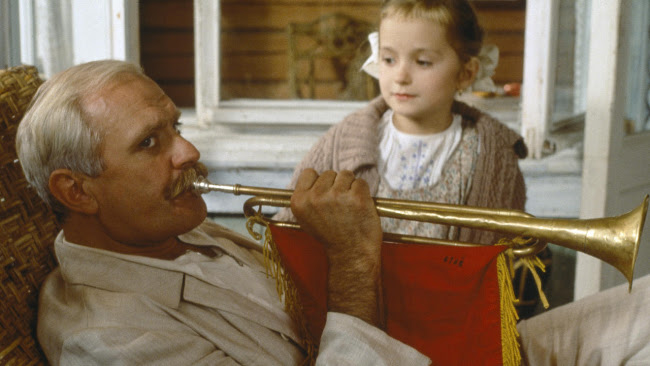 It's strange how quickly an obviously good idea can turn into something very bad. Nikita Mikhalkov directed and starred in 1994's Burnt by the Sun, the story of a Red Army hero named Kotov and some of the effects of the new Soviet Union on his family. An entertaining film with charismatic stars in Mikhalkov and his adorable young daughter, the film is unabashedly anti-Soviet. In the end, it has just as much bias as Battleship Potemkin, but it weaves a more complicated story before showing who is the clear villain and the clear hero. Watching the characters and trying to figure out what they're trying to do and what their motives are is a pretty engrossing exercise.

A young man named Mitya (Oleg Menshikov), a friend of the family from childhood, shows up at the large house where Kotov lives with the large family of his wife, Maroussia (Ingeborga Dapkunaite). Mitya now behaves in an erratic, manic way and it's heavily hinted that he and Maroussia had a romantic relationship in the past which she wants to rekindle despite her better judgement. The movie subverts expectations, though, when we learn just how much this seemingly private drama is related to the Soviet government.

Burnt by the Sun was released just three years after the fall of the Soviet Union, the Communist regime that throughout its history restricted the content of art that could be released. A period known as the Khrushchev Thaw began after the death of Stalin in 1953 that allowed for art to at least be more diverse, allowing a great filmmaker like Tarkovsky to develop his work in the country. But direct criticism of the Soviet government and unflattering depictions of its history were restricted, leading to Vasily Grossman's 1967 film Kommissar not being released for twenty years and its director barely avoiding arrest. Mikhalkov exercised a new freedom in depicting the negative aspects of the Soviet Union and presents the regime as being supported by people with good intentions but ultimately defenceless to corruption. The film's sequel, Burnt by the Sun 2, also directed by and starring Nikita Mikhalkov, is a much clearer propaganda film--it was endorsed and possibly funded by Putin--but the first film is much more subtle. Kotov for most of the first film presents an ideal aspect of the Soviet Union, telling his daughter (played by Mikhalkov's real life daughter Nadya) how the intention of the new government was to make sure no-one ever had to go without the basic needs for living.

Hints at the cultural differences between pre- and post-Communist Russia permeate the film. French is sometimes spoken by Maroussia's family, egged on by Mitya playing Offenbach on the piano, the language being the traditional language of the aristocracy and bourgeois of Tsarist Russia. Kotov naturally rankles at the sound of it. In telling Nadya a fairy tale, Mitya checks himself when he accidentally mentions the Philistines, biblical references now being prohibited as part of government restrictions on religion. Maroussia's grandmothers feverishly avoid the new government enforced safety drills during which they find themselves prodded disagreeably.

Mikhalkov also makes extensive references to Hamlet throughout the film, the play serving as a subtextual template which he subverts to evoke the sense of destabilisation in Soviet culture. Mitya directly refers to Hamlet in his conversation with Maroussia and at this point one would have great difficulty not spotting the similarities in plot. In Mitya's first scene, we see him courting suicide by playing Russian Roulette, a sort of physical manifestation of Hamlet's “To Be or Not to Be” soliloquy. His erratic behaviour throughout the film recalls the famous question about whether Prince Hamlet is mad or only pretending to be mad. Mitya even stages a sort of play for the family that clearly reflects and rebukes the actions of several characters watching, just as Hamlet does in Shakespeare's play. Maroussia has also tried to kill herself but she explains to Mitya that slashing her wrists failed because she was not submerged in water—unlike Ophelia who succeeded in killing herself in water. But Maroussia is a combination of Ophelia and Hamlet's mother Gertrude since she's married to the Claudius of the film, Kotov. Hamlet is about the Prince wondering if he should revenge his murdered father by killing his new father figure, the murderer and new ruler, Claudius. With the imagery of paternal figures used throughout Soviet propaganda, the fact that Kotov is a father figure—demonstrated through his relationship with Nadya—and a war hero makes him an usurping father figure like Claudius, particularly since he's taken the woman Mitya saw as reserved for him. The end of the film turns all this completely on its head, though. In doing so, the film reflects the sense of instability and distrust that ran alongside familiarity and rhetoric that emphasised community and brotherhood in the Soviet Union. It was hard to know who to trust, the film demonstrates.