Stop It, Dreyfuss, Stop It 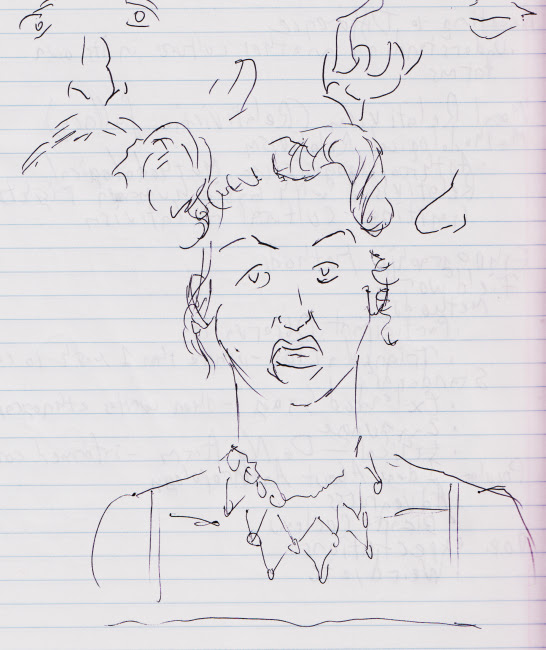 This is a doodle of Jenna Elfman I made while attempting to escape from 1998's Krippendorf's Tribe. The film just kept going, though, its rigorously stupid plot posing consistent insults to my intelligence.

Krippendorf (Richard Dreyfuss) is an eminent anthropologist and single dad, dealing with the death of his wife, who was also an anthropologist, and who, with him, sought a hidden tribe in the film's cheesy and poorly researched version of New Guinea that looks like it was filmed on an L.A. backlot. It's never explained how Krippendorf's wife died but it leaves room for Jenna Elfman to show up as Veronica Micelli, a former student of Krippendorf who has followed in his footsteps to become an anthropologist. She assumes he's going to give a lecture on the lost tribe--even though he never found it--and even though he's completely unprepared to give a lecture he agrees and tries to make up things as he goes along. He says the tribe has family units of single dads and makes up some words so obviously phony that everyone buying into the lecture must never have passed kindergarten. That includes all the faculty and administration of the anthropology department of Krippendorf's university.

I understand the film is trying to be a screwball comedy but even in a screwball comedy no-one's as dumb as the people are in this film. That's part of the fun of the tangle of manners and implausibilities in Bringing Up Baby or the absurdities tossed out in Duck Soup in defiance of social convention. Krippendorf's Tribe is a continuing decent into lazily conceived stock gags and ill-considered routines involving Dreyfus dressed as the chief from his made up tribe and video taping himself having sex with Elfman without her knowledge and showing it as an exposé of mating rituals.

I think the film was trying to satirise "tabloid anthropology" and interest in sensationalised stories of communities with little or no advanced technology. Though it never makes the case as to why we shouldn't be interested in mating rituals, I suppose there's an implicit dislike of media portrayals of sexuality of any kind I'm not in touch with so can't appreciate.

Anyway, I'm just glad it's over and I'm not watching the movie anymore.

Posted by Setsuled at 8:41 PM
Email ThisBlogThis!Share to TwitterShare to FacebookShare to Pinterest