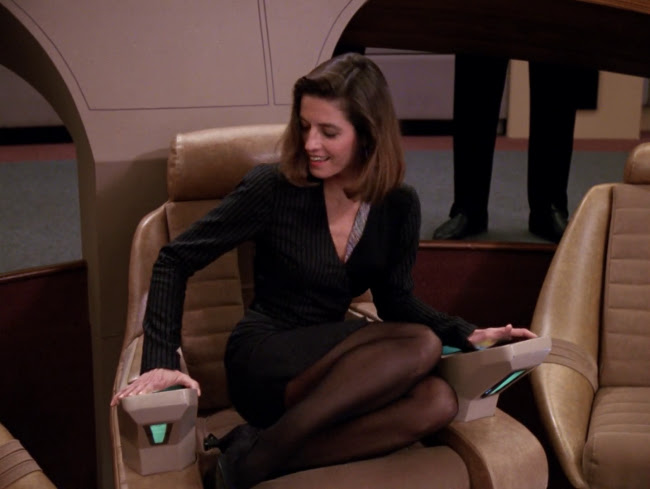 Star Trek: The Next Generation started out pretty well when it came to gender roles. It had a female chief of security and men wearing dresses. But then Denise Crosby left the show in the first season and afterwards the show was criticised for having its only principle female characters, Beverly Crusher and Deanna Troi, in caretaker roles. This was the case for years until the show introduced the recurring character Ensign Ro, a former resistance fighter played by Michelle Forbes, in the fifth season. There were plenty of guest female characters in between the first and fifth season who occupied more traditionally male roles as fighters and leaders (perhaps most notably Lt. Commander Shelby from "Best of Both Worlds") but at times the show could be downright regressive as I was reminded last night watching the fifth season episode, "Qpid". 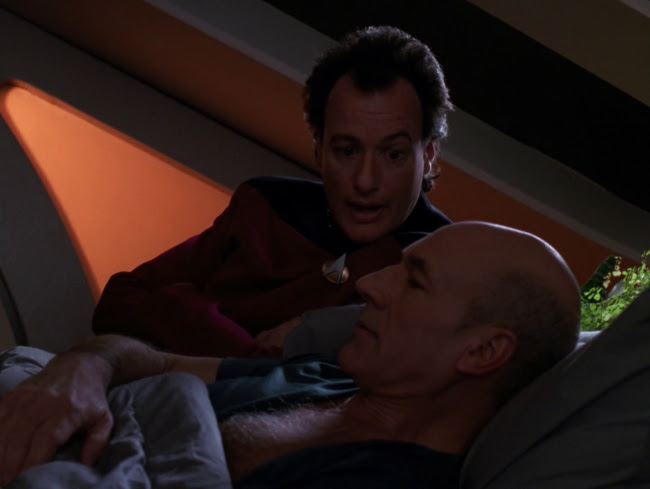 Kids like Q (John de Lancie), I think, because he's very much like a child. And as an omnipotent being he gets to cut through all that boring adult stuff that usually happens on the show. By my twenties, I'd started to find Q annoying but in my thirties I started being mildly amused by him again. In this episode, he wants to pay Picard back for helping him when he briefly lost his powers in the superior third season episode "Deja Q" and he chooses to do so by helping mend fences--or place a permanent barrier between, it's unclear which--Picard and Vash. 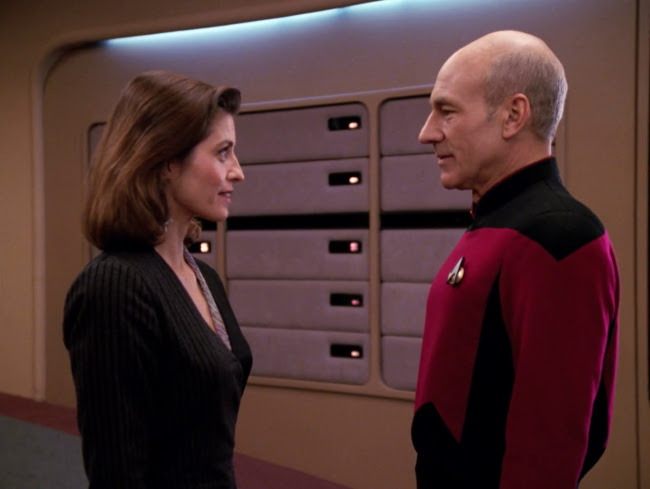 Introduced in the also superior third season episode "Captain's Holiday" (I've always said the third season was the best season), Vash is a pretty exciting character, a sly hedonist tomb raider played by Jennifer Hetrick. When she visits the Enterprise for the first time in "Qpid" (breaking into Picard's quarters), she's a bit put out to discover that Picard hasn't told anyone about her, despite the fact that the two had been lovers as well as fellow adventurers. 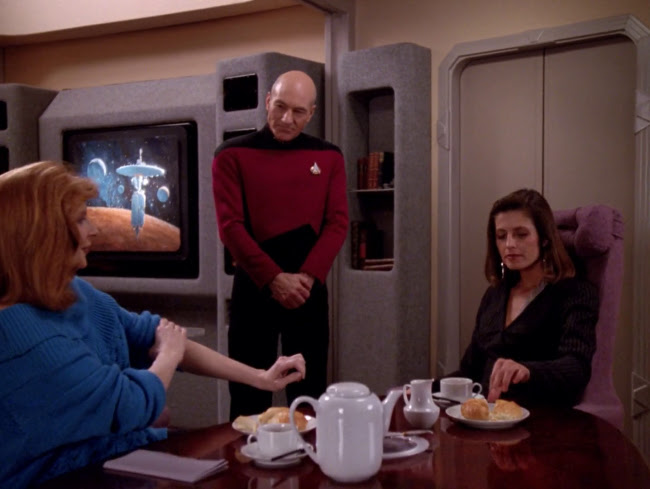 It's a plot that infantilises everyone a little bit. Picard for being so flustered at introducing Vash to his friends and Vash for being so angry that she hasn't been mentioned. The captain of a Federation starship hasn't told his crew that he slept with a thief, and the thief is upset by the faux pas. Does Picard know about everyone Riker's slept with?

But both Hetrick and Patrick Stewart are very good in the episode. Hetrick's good at being genuinely charming and deceptive--she never gives any big winks to the camera; if we didn't know from story events that she's lying to certain people she's trying to seduce, we wouldn't know either. And I like her slightly delayed reaction when Beverly first tells her Picard hasn't mentioned her. Even better is Patrick Stewart who somehow makes it look plausible that in this matter the consummately mature captain can be blushing boy. 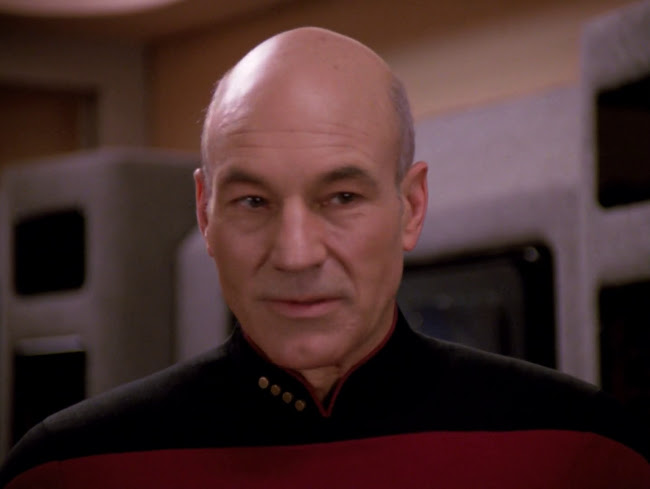 Q decides it would be a good idea to turn this into a Robin Hood story with Picard as Robin Hood and Vash as Maid Marian. Not that the themes in any way reflect the stories of Robin Hood.

Amusingly, Q is at a loss at first when Vash happily goes along with the idea of marrying Guy of Gisbourne but before long she's playing the damsel in distress he wants. 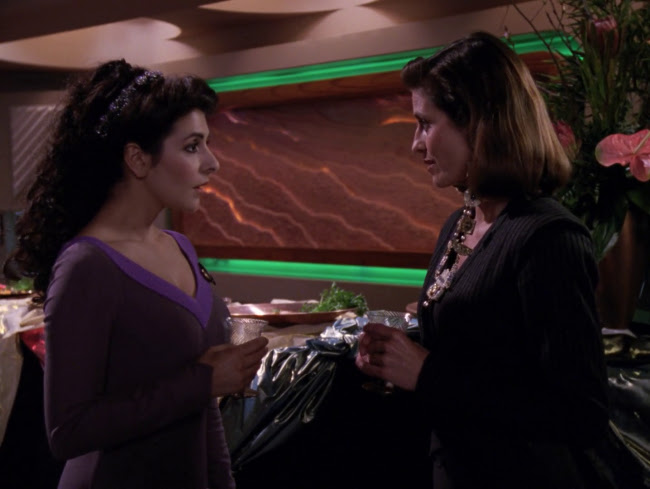 There's a big sword battle at the end where the men fight while Troi and Crusher awkwardly drop flower pots on people's heads. This already seemed cock-eyed to me, then I read on the episode's Memory Alpha Page:

Ironically, Marina Sirtis [Troi] and Gates McFadden [Crusher] were the only members of the cast that were trained in sword fighting, but only the men were allowed to use swords.

The entry has a quote from the episode's director, Cliff Bole;

I got a few letters about 'Qpid' that the women who wrote asked why weren't the ladies involved in a more modern way with the fighting. It was my feeling that we went back to the 12th century and we were doing the 12th century, and I can't change history.

Yes, like the historically accurate moment when Data takes some little breaker out of his arm and makes a bomb. Not to mention, with all the nods to the Errol Flynn movie, it's pretty clearly a fantasy version of the middle ages. Ugh.

Posted by Setsuled at 7:22 PM
Email ThisBlogThis!Share to TwitterShare to FacebookShare to Pinterest