Guardians of the Prismatic Spray

One thing's for sure, the Guardians of the Galaxy movies aren't among the many modern films that use a dull, blue and amber colour palette. In 2017's Guardians of the Galaxy Vol. 2, director James Gunn uses every colour in the rainbow, and then some, but manages to keep the riot of colour, characters, and effects in a tight enough bundle to make a very entertaining water balloon of enthusiastic post-modern affection.

My favourite parts of the film were the conversations between Drax (Dave Bautista) and Mantis (Pom Klementieff). It seems the filmmakers sought to pair one big-hearted, simple-minded character with another, which doesn't seem like a concept that would have legs, yet their conversation about beauty was oddly thought provoking, despite the obvious joke in Drax's assertion that beautiful people can't trust anyone. Now the two seem to be on the path to a relationship in which physical repulsion is agreed on as a desirable concept. It's not exactly like Peter (Chris Pratt) compulsively talking about David Hasselhoff at the end of the film in order to mute some of the big emotional notes, but the landscape Mantis and Drax have created has something like the enthusiastically ironic appreciation for pop culture references that pervade much of the film in that there's a pursuit for earnest feeling through the destabilising of signifiers. I've been at university too long. 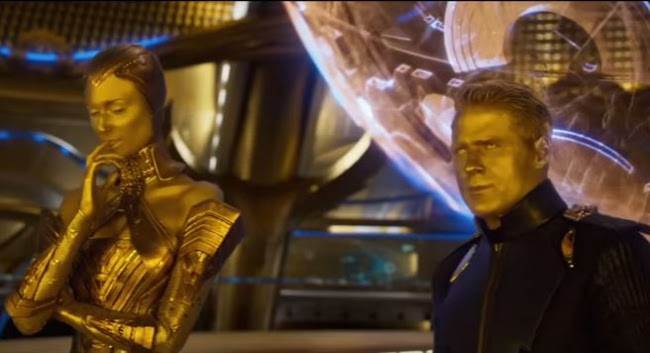 I was really jazzed to see Ben Browder's cameo. After seeing the first film, I noted how much it owes to the great Sci-Fi television series Browder starred, Farscape, in terms of tone. It seemed James Gunn was acknowledging the influence with this cameo, and I dig it. With Browder putting on that English accent, it seemed like Crichton posing as Peacekeeper.

When the first movie came out, I remember people commenting on how refreshing it was that Gamora (Zoe Saldana) didn't end up becoming Peter's love interest, which generally made me wonder if these people were watching the same movie I was. It seemed abundantly clear that they were intended to have an unspoken attraction, but I guess we needed this movie with Peter directly stating to Gamora than they shared an unspoken mutual attraction. This movie did a better job of having Gamora seem attracted to Peter, though--she can actually be seen checking him out early on. And is it really so strange? To quote John Cleese in Monty Python's Meaning of Life, what's wrong with a kiss? I've been disappointed by the lack of romance in the new Star Wars films and television series, I'm glad this apparently isn't something Disney's mandated for all its properties.

I still don't find Gamora all that interesting. Nebula (Karen Gillan) was a lot more fun and I enjoyed watching her try to sort her feelings out. It's a shame Gillan has to shave her head for these films, though, her hair is so fantastic. If Paul Goddard were the Farscape cameo the two could commiserate.

I read James Gunn made a point of making sure the movie passed the Bechdel Test many times. But he must have misunderstood the test, which requires that two or more named female characters have a conversation where they don't talk about a man. The Bechdel Test website can only find one brief instance in the film that passes and it's actually a conversation in which Peter, Drax, and Rocket (Bradley Cooper) take part.

Personally, I don't care if a movie passes the Bechdel test or not. As even proponents of the test have pointed out, there are many movies that don't pass while still having great female characters and many movies that do pass while lacking good female characters. But I'm a little intrigued that Gunn was so keen to pass the test but still managed to botch it almost completely. Oh, well. It happens to all of us.

The main plot of the film involves Peter's quest for a father figure with Kurt Russell's character, Ego, and Michael Rooker's Yondu being the contenders. The story explicitly involves creation and hierarchy. The movie begins with the crew doing a job for a race of beings who look down on everyone else for their belief in their own perfection, a concept which becomes a more serious concern for Peter later in the film. Again, this goes back to a digestion of the fundamental artistic motive of the film which celebrates a group of misfits and older movies and television series--like Farscape and Star Wars--that featured similar small groups butting heads with powerful beings and governments. One could look at Peter as Prince Hal choosing between the father figures King Henry IV and the morally weaker Falstaff. Though Yondu turns out to be a little too principled to be a genuine Falstaff. But the film is clearly happy to celebrate the fact that it's not the first to present a hero choosing between being a ruler or an ordinary mortal. Of course, no-one in this film is really an ordinary mortal, but still.

Posted by Setsuled at 6:07 PM
Email ThisBlogThis!Share to TwitterShare to FacebookShare to Pinterest