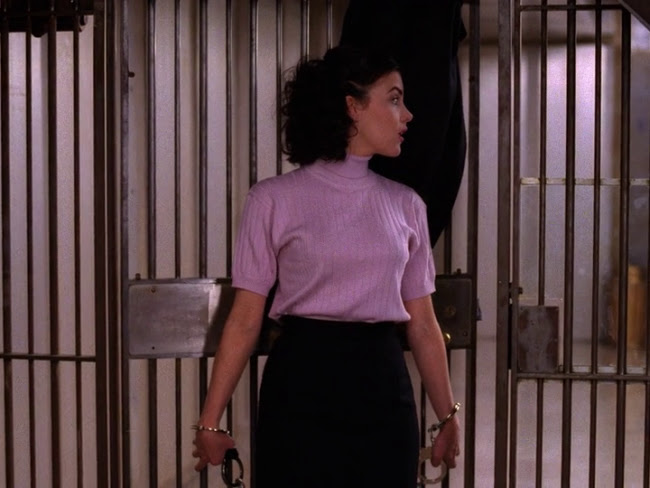 It won't be long now before we get to see a new episode of Twin Peaks. It's still not soon enough for me--"I want it now" has been repeating in my brain for over a year now; that and, "Why is it taking so long?" I've been getting ready over the past few days by watching INLAND EMPIRE, David Lynch's last feature film, released over ten years ago, and the final episode of Twin Peaks season two, the final episode of the series' original run. The two works are worlds apart, in their way, stylistically, but they're both inimitably David Lynch.

My love for David Lynch began in high school, in 1995 or 1996 or so. Lynch for me was very much a gateway drug, in terms of cinema and music. Before the Lost Highway soundtrack, all I listened to was orchestral film scores and "Weird Al" Yankovic. I went from being a nice Apollonian Trekkie to being a Dionysian lost cause pretty much thanks to David Lynch. Well, I may be overstating it slightly. But suddenly after Lost Highway my John Williams and James Horner CDs started gathering dust as I became a fan of David Bowie, Nine Inch Nails, and The Smashing Pumpkins, and instead of watching Star Trek II for a few hundred more times, I started watching not only David Lynch but also Cronenberg, South Korean horror movies, the Godfather films, and so much other weird shit. Something about Lynch showed me that there was more to art than a clever story about a nice shiny future or a sensible adventure. 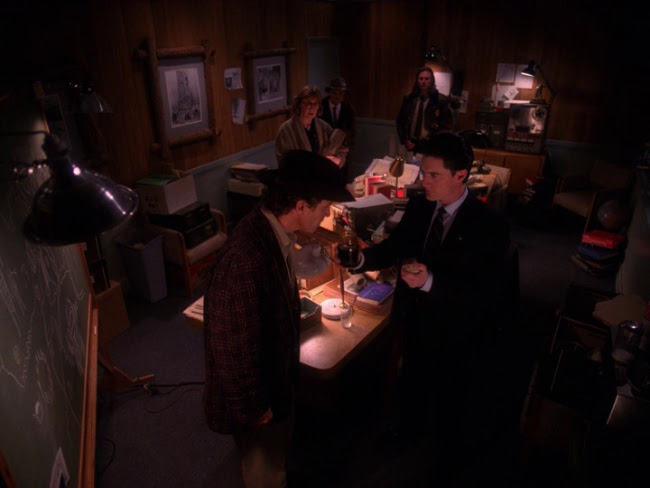 I'd also have to credit my high school film-as-literature teacher, Martin Johnson, who's retiring this month. I suspect also the simple fact that I was a teenager made me more open to weird, transgressive stuff, too. But looking back, it seems to me a crucial step into adulthood, moving from my personal Age of Enlightenment into something like a personal Romanticism into Gothic and Realism (I'm referring to trends in art and literature of the late 18th century through the 19th). I can only hope with this new Twin Peaks Lynch will spur a similar maturation in audiences addicted to the simple linear logic of superhero films. I doubt it, but it would be nice. 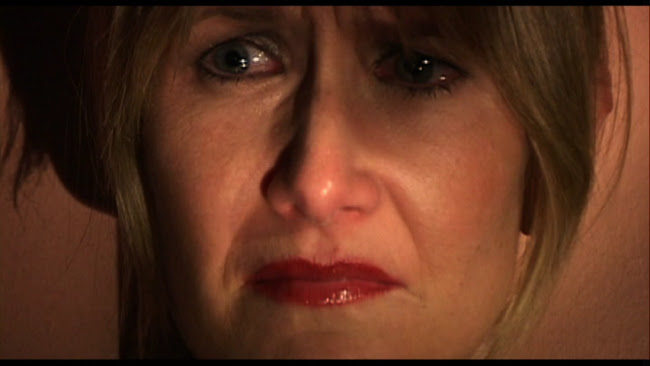 INLAND EMPIRE, despite being, until later to-night, Lynch's latest film, may not offer any clues as to what to expect from the new Twin Peaks. Watching it a few nights ago, I was struck by the extraordinary number of close-ups, far more than in any of his other films. Often shots that start as close-ups get even closer with the effect of dehumanising the human face until it's an inscrutable mask of flesh. 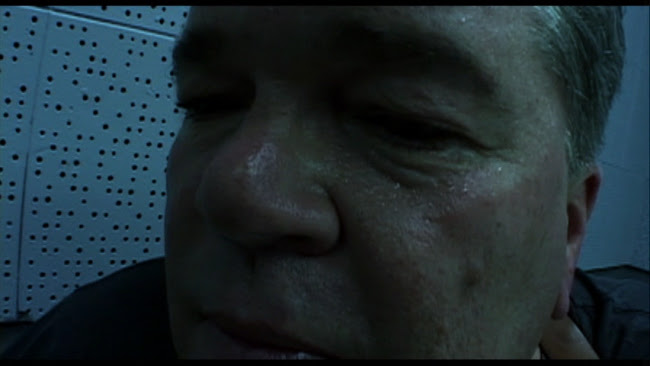 Part of the reason for this, I believe, was Lynch's newfound love for low-quality digital video. Like found footage films, one of the effects of low quality footage is it makes it harder to see what might be lurking in the shadows and sudden movement and gradually revealed shapes are made eerier. But if you want to see facial expressions, you can't use long shots. But I don't think this is the only reason for the close-ups--INLAND EMPIRE is such an interior film, a beautiful and scary hallucination experienced by Laura Dern's character where suddenly no human face is familiar enough not to become frighteningly alien. 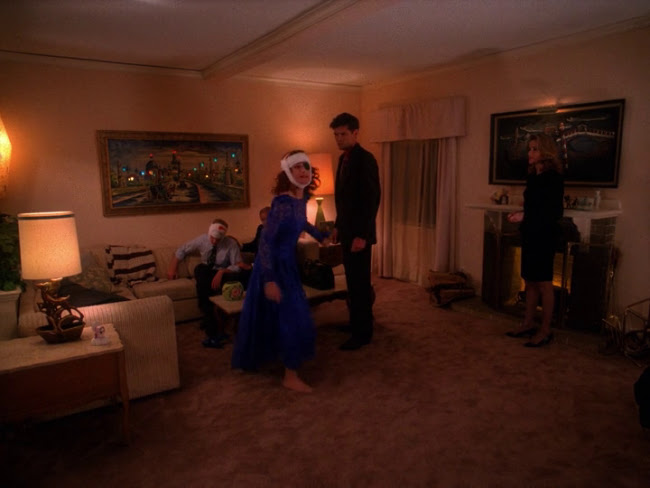 The finale of Twin Peaks season 2, by contrast, features an extraordinary number of long shots--long in duration and long as in distance between camera and subject. This, the first episode Lynch had directed in quite some time--he'd been away shooting Wild at Heart--in so many ways was clearly intended as a jab at the show Twin Peaks had turned into in Lynch's absence; an average, unremarkable soap opera. Filled with sudden, absurd, and violent terminations to plot threads, it also features some almost sadistic cinematic technique, particularly for a television screen. 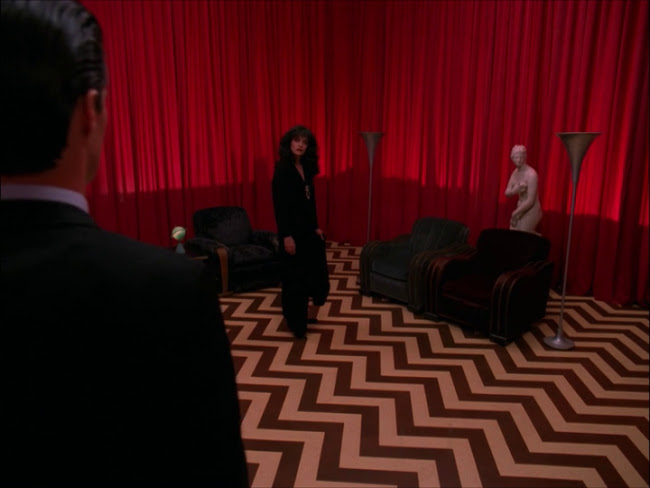 It's hard for me to watch the old Twin Peaks because I've watched it just about to death, mainly just the David Lynch episodes, over and over, but one of the nice things about the Blu-Ray was the fresh perspective it gave. This final episode of season two is one of the ones that benefits most because of those long shots. Suddenly that charmingly excruciating scene in the bank, with the little old man shuffling from Audrey to Andrew and Pete, is a completely new scene because I can make out everyone's facial expressions. 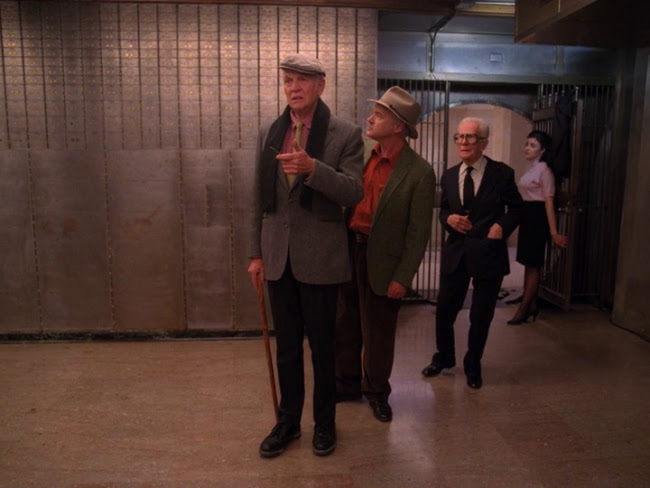 But I always loved that scene, so fucking much. It's just such a beautiful and oddly sweet "fuck you" to the show that had become plot point, plot point, plot point, to plot point. Lynch mercilessly cranked it all down to have us watch this little old guy dealing with a slightly strange day at the bank that ends ludicrously and enigmatically. 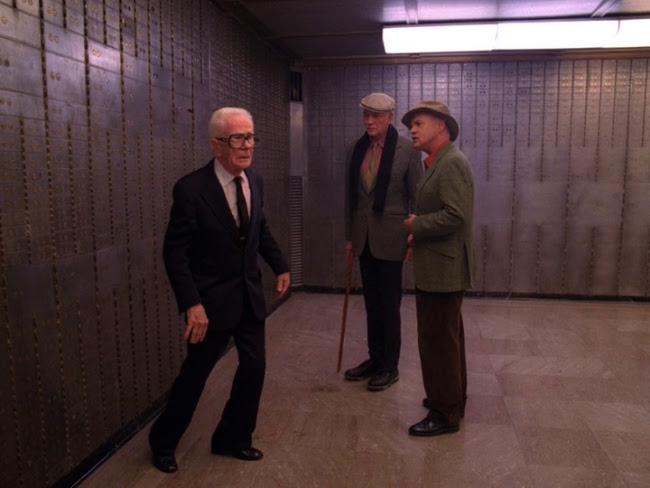 I'm so glad Lynch is directing every episode of the new series, I'm so glad that he played hardball to get the budget he needed. To everyone who's talked about this new golden age of television, it's true, we are seeing some incredible TV. But whatever we see to-night, I guarantee it'll be like nothing you're used to.