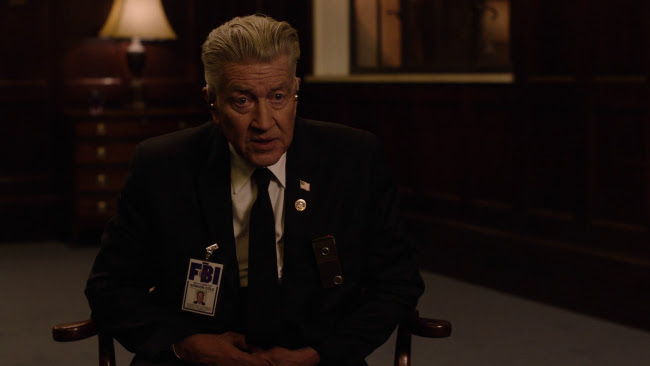 Where do I begin? I'm still in afterglow. It's not often you have your expectations not only met but exceeded but the new Twin Peaks has so far given me what I wanted and surprised me, too. Well, I wanted that surprise but there were things about these first four episodes I was only dimly conscious of having missed. It wasn't just classic David Lynch, it represented sensibilities in filmmaking that haven't been around since the 90s. Lynch shows us what we lose by allowing television to supplant film while at the same time showing us how television can adopt those things to truly be a worthy successor. He demonstrates how important a director is in a medium that is now largely more associated with writers. The atmosphere, the editing, the tone of the performances--I don't think it was simply nostalgia that made me so happy, though it was like dreaming a dream I hadn't had in twenty years. It felt like a door was opened in a room I didn't even know I was in. 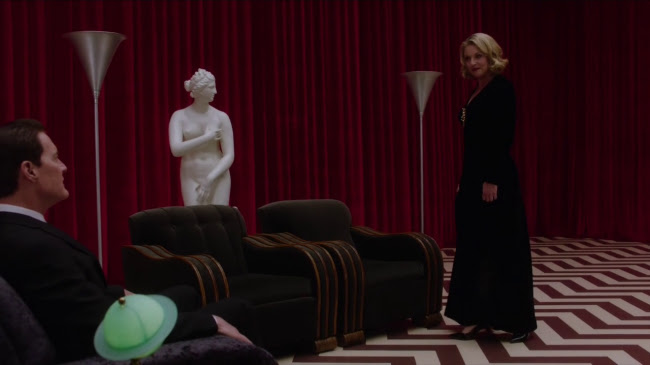 Lynch largely forgoes any attempt to bring new viewers up to speed. I think a receptive new viewer might enjoy this purely for the ingenuity of filmmaking but the story doesn't waste any time picking things up right where they were left twenty five years ago with the final episode of season two and the 1992 movie, Fire Walk with Me. 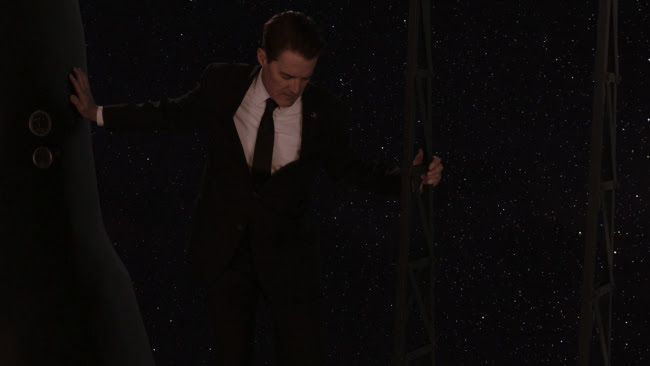 People wanted to see Agent Cooper (Kyle MacLachlan) and that wonderful, charmingly innocent yet wise personality from the first episode, so I wondered if Lynch and Frost were going to dispense with the doppelgänger plot right away and try to have a sort of reboot. Maybe a new murder and then focus on the different townspeople and their reactions. Twin Peaks was originally conceived as a soap opera meets a detective procedural. Over the course of the second season, the soap opera aspect became noticeably stale and the detective aspect morphed the show into a supernatural detective series, and this is right where the new series picks up. Even Fire Walk with Me, which focused on the final days of Laura Palmer's life, was more about how the supernatural was an influence on that life and the ways in which supernatural planes interacted with the corporeal world and the FBI. The first shows to exhibit the influence of Twin Peaks, like The X-Files, tended to draw from the supernatural detective aspect while later shows like Veronica Mars or Broadchurch tended to focus on the more corporeal, earlier aspects of the show. In a world increasingly disinterested in stories of the surpernatural, or at any rate such stories that take themselves seriously, the new Twin Peaks may have trouble finding footing with new viewers, if Lynch's filmmaking brilliance can't win the day alone. 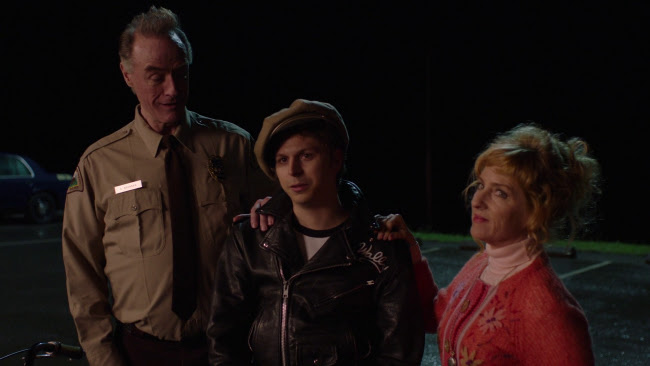 Remember what a boring idea it was when Steven Spielberg ditched the mysticism of the first three Indiana Jones films for aliens? Maybe audiences are ready to go back to that place with art more sophisticated than Dan Brown. Michael Cera's character, Wally Brando, introduced in the fourth episode of the new Twin Peaks, made me wonder if Lynch was mocking Shia Labeouf's character in Kingdom of the Crystal Skull, who was, like Wally, introduced on a motorcycle wearing the identical costume based on Marlon Brando in The Wild One. We're not meant to take Wally as seriously, though, as Robert Forster shaking his head as he walked away seemed to indicate. Everyone figured out Cera would be playing the child of Lucy (Kimmy Robertson) and Andy (Harry Goaz) but I don't think anyone saw the beat Brando impression coming. But it's perfect--like Lucy and Andy, he's ridiculous while making the audience feel like there's more to him. There's a kind of poetry in his ridiculousness that seems as though it might present insight. 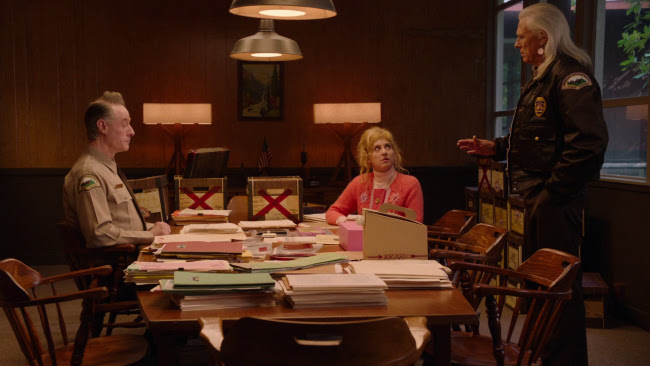 And with respect to Hawk (Michael Horse), I do think it's the bunnies. Lucy says she ate one bunny but we can see two and a half are missing. 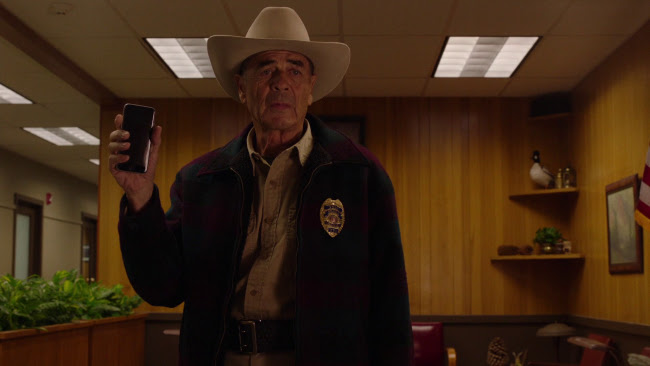 I really like Robert Forster as the new Sheriff Truman. I'm sad that Michael Ontkean was unable to come out of retirement--it sounds like he has medical issues--but Forster is fantastic. Along with Lynch himself as Gordon Cole, I feel like we're seeing the face of old wisdom that, like so many other things, we don't see very often anymore. Look at how hard it was getting people to accept Peter Capaldi as the Doctor on Doctor Who. 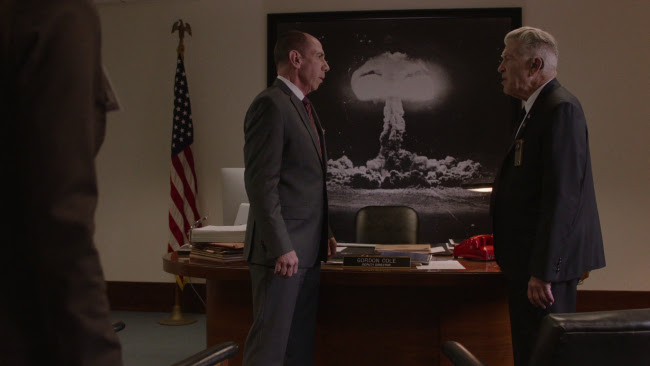 This leads me to another thing the new Twin Peaks gives us I haven't seen in a long time--a great supporting cast. 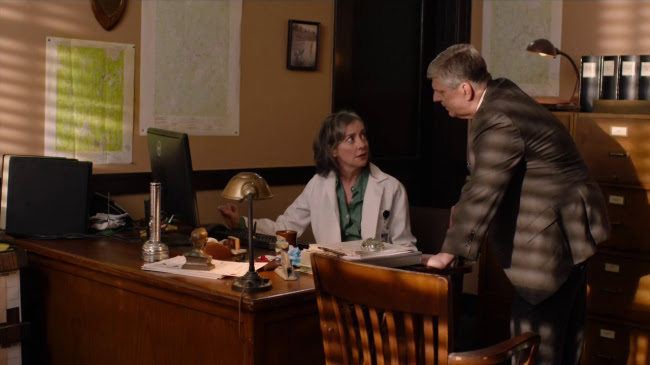 A great director can use a bad actor though a good actor doesn't usually hurt. I can't always tell which is which on Twin Peaks which is exactly as it should be. The great number of new people introduced are somehow both peculiar and extraordinarily credible. They're weird and yet very real. The soft cops who seem more interested in the process of getting into Ruth Davenport's apartment than in any bigger picture, the wife who's concerned about guests coming later while her husband's being arrested. The characters are types yet there's things about them that push towards being types of people you might meet than being types of people you might see on a television series. Part of this is that Lynch seems blessedly free of the increasingly neurotic political influence exerting itself in media. 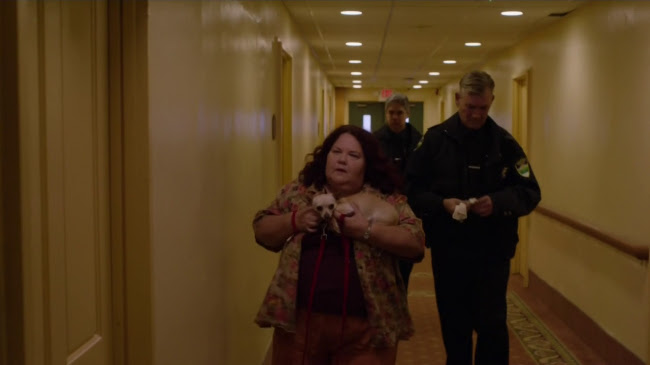 The fat lady in the hotel is a good example. She's believably ditzy, there's no compulsion to give her a moment where we see she's exceptionally intelligent in some way, we don't have the need to get a flash of a whole backstory where she's in some way a badass. But I've known plenty of people like her. Lynch paints with a full palette of characters as he peoples his world. The young man watching the glass box and the girl trying to seduce him suggest full personalities with their mannerisms even as they have pretty simple functions in the story. 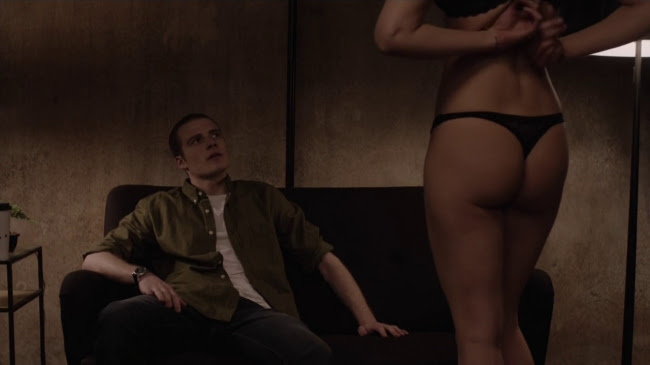 I guess they chose a pretty bad time to have sex. Or maybe it was the sex that attracted that weird, shivering entity. The show has always linked sex with the supernatural, often in violent, tragic ways. It's the cosmic judgement or sin that Laura Palmer died for, the inability for humans just to let love and sex happen and be beautiful without imposing ploys for dominance or hang-ups. 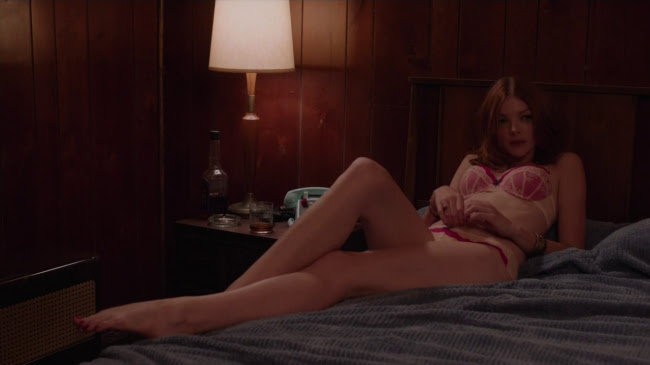 Damn, there's so much more to get to. As with Michael Ontkean, I was sad Michael J. Anderson couldn't return to the show, though from what I've heard it's because Anderson was being kind of a dick. Also as in the case of Truman, I really like how Lynch made do in the absence of the old actor, in this case by creating the "evolution of the arm". 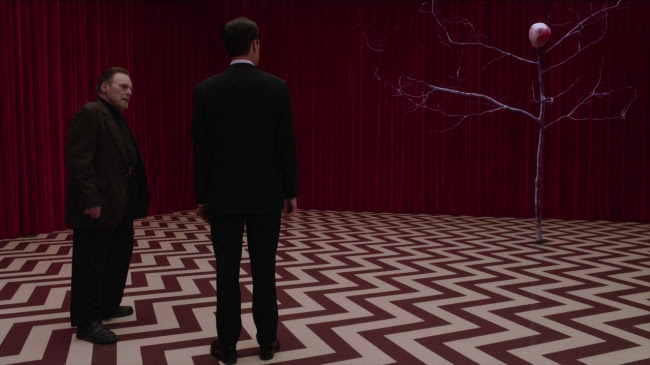 As we learned in Fire Walk with Me, the little man in the red suit played by Anderson was in fact Phillip Gerard's (Al Strobel) missing arm. On the new series, where apparently people, living and dead, physically age in the supernatural realm called the Black Lodge, the little man has evolved into a sycamore tree with a bare brain or possibly wad of gum at the top. I wondered if Lynch could really do anything to make the all too familiar Red Room seem strange again and I think he pulled it off by taking things in a decidedly more Alice in Wonderland direction. 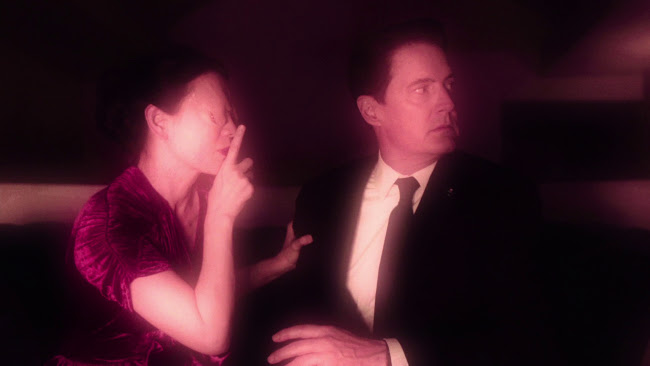 Poor Cooper, trapped in the lodge all this time. I haven't even started talking about Kyle MacLachlan! He's so far played three roles on this show. As the sinister doppelgänger Cooper, he shows that Lynch is still the same guy who created Frank Booth and Bob. I can't say I'm a fan of the hair style, but there's something effectively menacing about him, not merely from his aura of effective violence, but for things like the dialogue where he explains how he doesn't "need" anything--he only "wants". 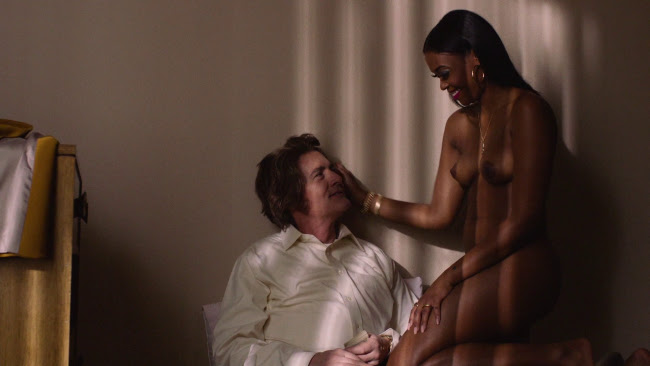 Then there's poor Dougie, who seems not to have even been a real person, but rather a decoy. It's brilliantly sad to think about, this guy who has a wife and kids, yet you do get the impression that there is a lack of something about him.

Anyway. I could write a book. I loved Naomi Watts and the reintroduction of the Horne brothers, Jennifer Jason Leigh, the musical guests, Dr. Jacoby's art experiment in the woods, Albert--gods, Miguel Ferrer is so vital here--Chrysta Bell, Denise Bryson, Sarah Palmer's enormous television with the lions tearing apart their prey. And a million other things I'm leaving out. And there's more to come! We haven't even seen Big Ed yet!

The lonesome foghorn's plastic seeds the lake.
On banks unsafe for rings or horns she'll light.
A blue and hidden key's cocaine she'd take.
The antler shadows grew into the night.
The feathered crown is hitting houses shrunk.
On shaded lawn a frame encased a dream.
Norwegian subs for one eye have sunk.
The feathered watchers are not what they seem.
A fractured floor reveals the certain stars.
Contained in dimming light the shaking cry.
With ease the shot replaced the eyes in cars.
The horns have been and arms can try.
A bunny missing twice must take it black.
The coffee not like oil rights the track.