Through the Elusive Reflecting Dream 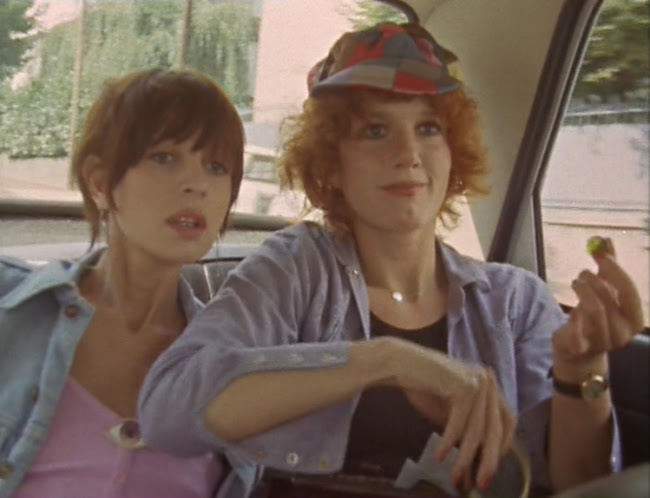 If one looks at Post Modernism as a loss of innocence, one might see 1974's Celine and Julie Go Boating (Céline et Julie vont en bateau) as a Post Modernist lamentation of the inherent tragedy of Post Modernism. A New Wave film by Jacques Rivette, the film charts the nature of the human need for storytelling through a charming relationship between two young women. Alongside this need, though, is the constant urge to subvert illusion, but the process inevitably involves the crafting of new illusions.

The film begins with Julie (Dominique Labourier) spotting Celine (Juliet Berto) at the park, walking past in a hurry, dropping her sunglasses and scarves. Julie feels compelled to follow. Over the course of the first third of the film, the two women slowly discover and begin testing the limits of their ability to read each other's minds. First Celine has a craving for a Bloody Mary just before Julie enters the room with two Bloody Marys she's prepared for them, then Julie seems to magically know all of the stories Celine has made up about her to her friends, about Julie being American and having a pink, heart shaped swimming pool. I've read Rivette had his actors improvise a lot and that's certainly the impression I get from the extremely natural and relaxed chemistry visible between Celine and Julie. And yet nothing they say seems like wasted time, despite the film's three hour running time. Their natural rapport is important for the contrast it establishes with the more traditional, rehearsed quality to the performances elsewhere in the film. The two women begin living together and exploit their psychic connexion by exchanging lives, each incident when they do so an exploration of how storytelling and performance figures into the other's life. 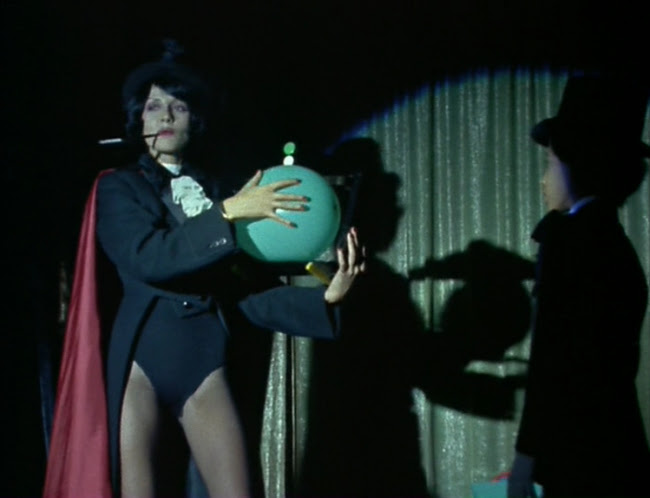 Celine works as burlesque magician so one night Julie fills in for her, her free ranging performance ending with her pretending to be a nervous young actress crying as she auditions for two prominent agents--who are indeed in the audience. After Julie starts angrily stripping off her clothes, she runs outside and starts laughing and it's clear what had just occurred was a performance, Julie's interpretation of a desperate performer, and we can see that she made the two agents in the audience part of the performance. 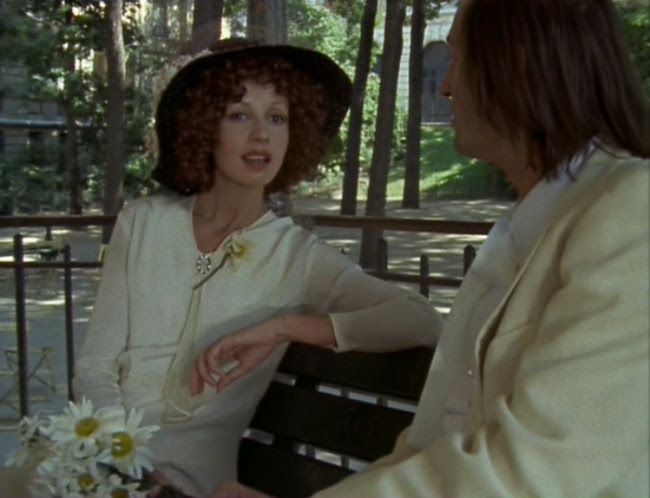 Celine answers a phone call from Julie's boyfriend and pretends to be Julie. She meets him in a park wearing a red wig like Julie's hair and it quickly becomes clear that the boyfriend is so locked into the formal patterns of breaking up with someone that he's unable to see that the woman he's talking to is not, actually, Julie. 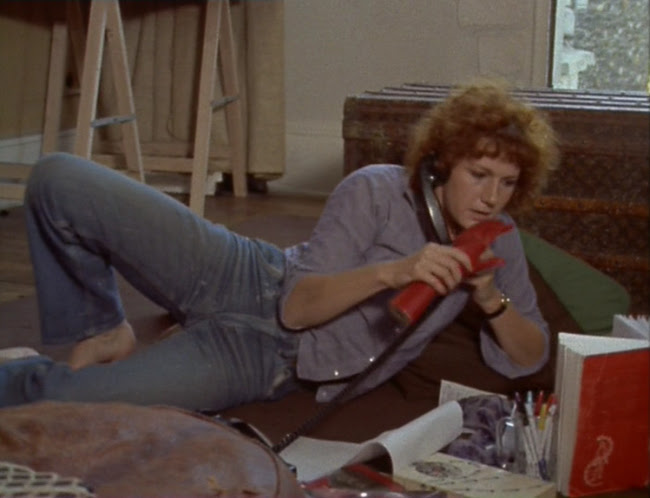 The education Celine and Julie receive from this experience leads them to another adventure. They discover an old house surrounded by cats. When one enters, she emerges with a piece of candy and the mark of a red right hand on her back (I don't think it's a reference to Paradise Lost but it might be). Both women stop their usual giggling whenever they see the hand and both seem to be ashamed of it, immediately scrubbing it off. 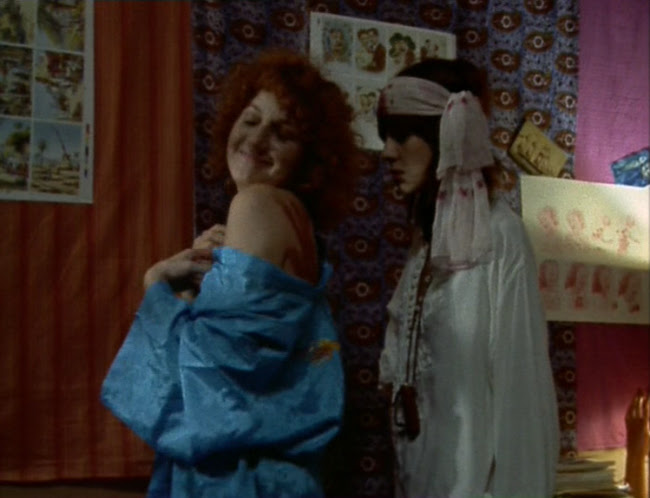 The piece of candy allows them to view a sort of movie in the mind, something they'd both been flashed glimpses of throughout the film already. Like LSD is supposed to open an artist's mind to things, this candy seems to open Celine and Julie's minds to the full story--because of their psychic connexion they can view it together and they seem to view it from a nurse character who is shown played by both actresses, the film swapping them between shots. 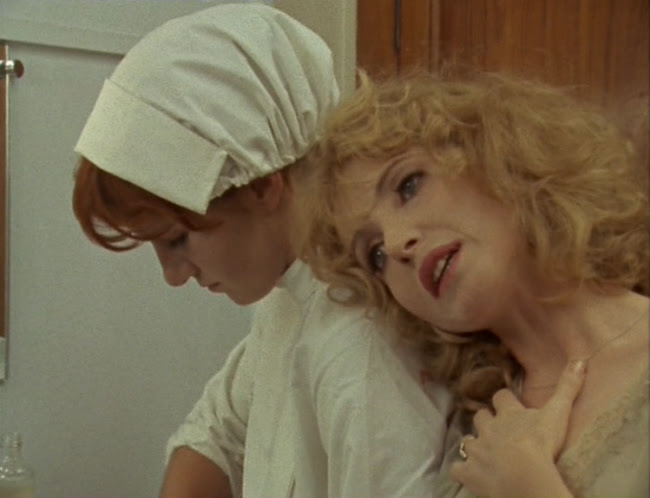 The Wikipedia entry in its synopsis infers many references to Alice in Wonderland, more than I think are actually there, but it's undeniable Lewis Carroll's book had some influence on the film. It's directly referenced by the little girl cared for by the nurse and the very ending of the film recalls Carroll's prefatory poem from Alice's Adventures in Wonderland. Much like the Liddell sisters begged Carroll to tell them a story that day on the river, and much like one of the Liddells actually became the star of the story, Celine and Julie compulsively watch the movie in their heads, even as they find themselves discontented with it and want to change it. But it's questionable whether or not they can escape when whatever they do inevitably becomes more story.

A coiled yoyo sings without a voice.
To leap across the salty field we wait.
The numbers fall beneath the eaves of choice.
Confusion starts to roll a bony fate.
In time all statues turned balloon'll rise.
A walking face affronts divine accord.
The dagger men condemn the thought of pies.
More gum was stuck than teeth can yet afford.
Undoubted curves'll make the hat at last.
For spirals know the sport of clogs was choice.
In steamer trunks we glued like Hell is fast.
A balanced dime could see the balding voice.
An ice pick's made of ice when movies froze.
A cake transformed the curious who chose.