A One Sided Space Affair 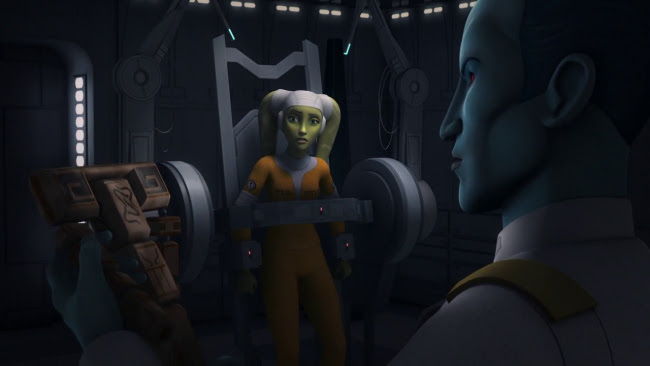 Star Wars: Rebels finally returned last night with two new episodes. Excited? Well, although the writing quality hasn't much improved, even surprisingly indulging in several unpopular gender related plot devices, it did at least deliver one plot point I'd been fervently hoping for since the series began. 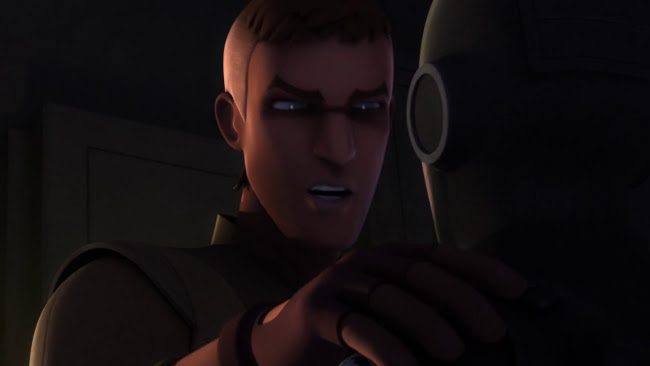 Kanan (Freddie Prinze with a Z Jr.) is finally dead. I was hoping for something more humiliating, like falling face first into lava while making a bad joke, but the important thing is he's gone. Unless the show again pulls its punch like it did with Sabine's (Tiya Sircar) mother at the beginning of the season. 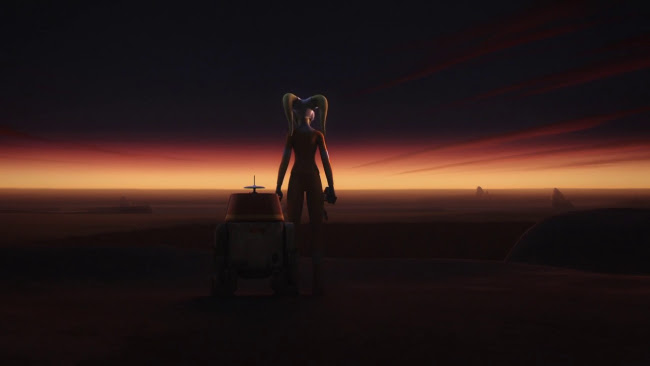 But obviously Kanan and probably Ezra (Taylor Gray) need to be dead for the premise of Rogue One and A New Hope of a galaxy without Jedi. Then again, I would've thought it would be important for the Rebels not to be destroying a Star Destroyer every five minutes the way they do on Rebels, so who knows. The first of last night's two new episodes, "Jedi Night", did seem to be making an attempt to make things look a little more desperate, though, and the destruction of the fuel for the TIE Defender factory seemed like it was being treated as a miraculous victory. It almost made the show seem like it belonged in the galaxy dominated by a seemingly unstoppable Empire we see in the films. 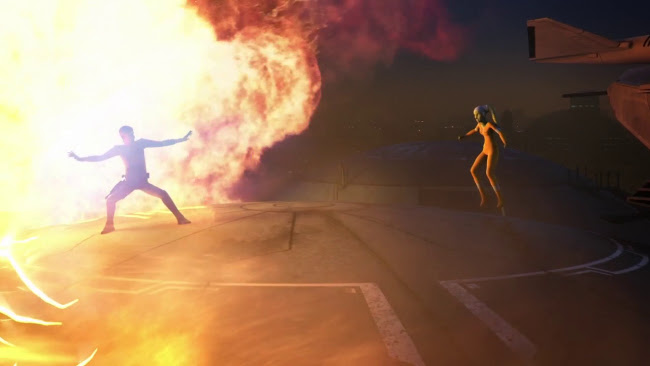 Of course, it's part of Kanan's whole flattering death package. His martyrdom comes after saving a drugged and physically tortured Hera (Vanessa Marshall) whose humiliating state allows the writers to side step any real development of their relationship until she confesses her love to him. Then Kanan has the awkward line about how it's "the Truth Serum talking"--wouldn't that mean it's true, then? Hera confesses her love and Kanan, as a stoic figure of weirdly retrograde masculinity, doesn't say he loves her back. 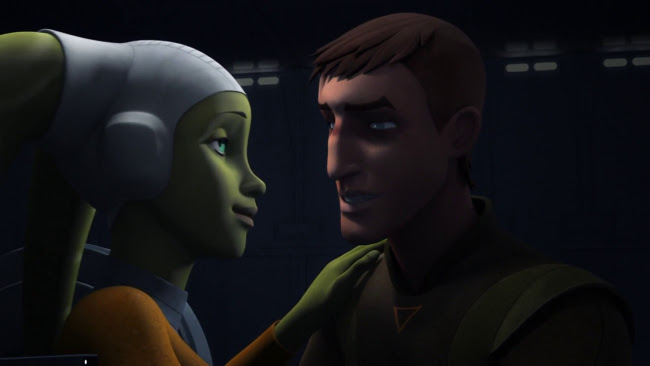 Isn't that like Han and Leia in the climax of Empire Strikes Back? Not really. One of the reasons Harrison Ford's performance in both the original Star Wars trilogy and the Indiana Jones films is such a revelation is the vulnerability with which he imbued his otherwise old fashioned heroic characters. In Empire Strikes Back it's in the writing, too--as much as he seems to have Leia pegged when he alludes to her true feelings for him on Hoth, its his preoccupation with her feelings that reveals his. Leia picks up on this and that's why he looks hurt when she kisses Luke. When he's put in carbonite on Bespin, she shows herself to have more strength by being honest with her feelings while Han hides behind his cockiness--"I know"--which has the gutpunch effect of making his fate seem all the more horrible. He's not ready to die, he's at least as much of a kid as he's accused her of being. 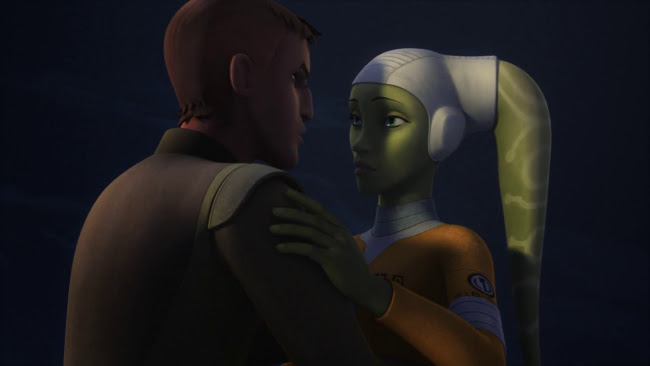 The relationship between Hera and Kanan depicted in "Jedi Night" is downright creepy by comparison. He almost takes paternal custody of her while she's loopy from the drugs, something that becomes even more uncomfortable with suggestive shots like this one: 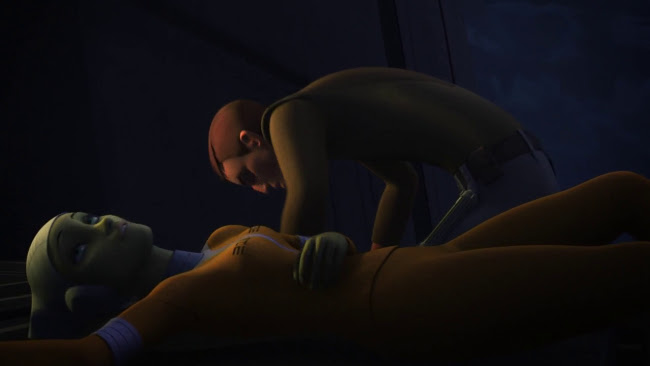 It's less about a relationship than it is about Kanan winning her with his chivalry. 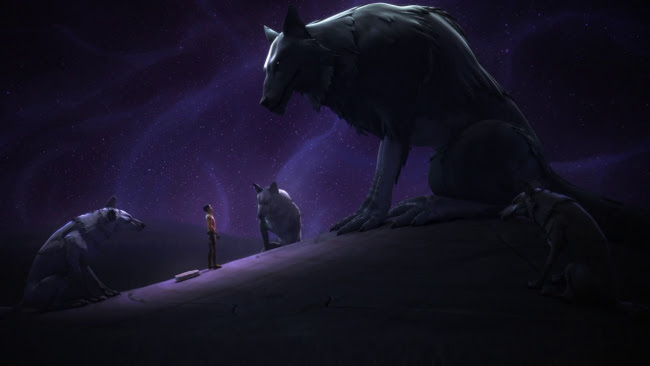 The second of last night's two new episodes, "Dume", features the return of the wolves from Princess Mononoke, called "Loth Wolves" on Rebels because they're native to Lothal, much like Loth Cats and presumably Loth Blue Whales and Loth Praying Mantises. One of them seems to be a reincarnation of Kanan. The sequence, with all the trappings of spiritual revelation, turns out to be all about giving Ezra a new quest. 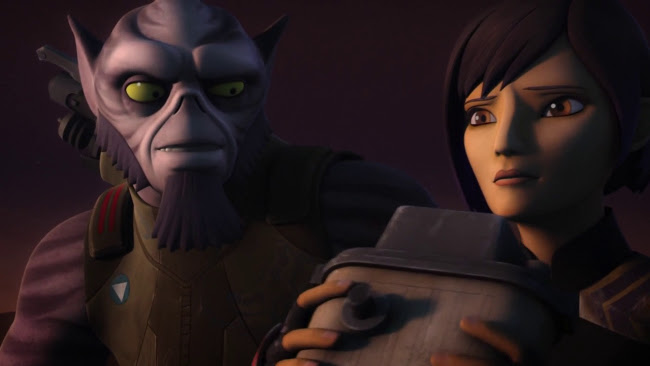 Meanwhile, Sabine and Zeb (Steven Blum) have a fight with Rukh (Warwick Davis). They first spot him from a distance and have some strange dialogue where they refer to him as an "it" and a "thing", which is odd considering Zeb looks way more alien than he does and regular encounters with much stranger looking people seem to be fairly normal in the Star Wars universe. It takes on disturbing connotations when one considers the Noghri, Rukh's species, have a history as an enslaved people in the old Expanded Universe. The fight itself is okay except Sabine can't seem to hit him when he's standing still in front of her and she's using two guns. And for some reason both her and Zeb think it's a good idea to send him back to the Imperial base unharmed but covered with paint. Obviously we're dealing with a very different wing of the Rebellion than the one Cassian Andor belongs to. 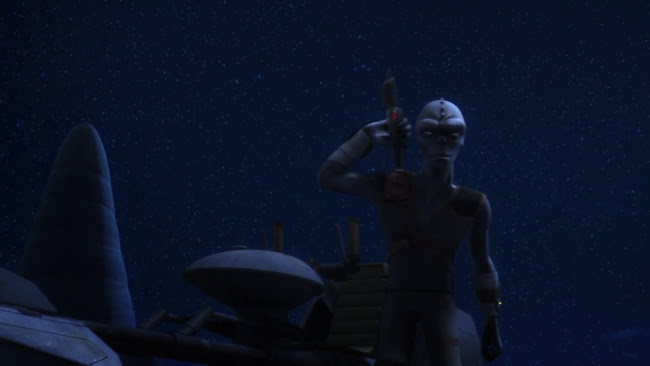 The lighting was pretty nice in these two episodes and as usual Vanessa Marshall gives a standout performance as Hera. Hopefully she has a much better role on the show going forward. I'll keep watching hoping for that and I'm looking forward to hearing Ian McDiarmid back as Palpatine. But I really hope the multiple Star Wars series Disney reportedly has in development will have better writers.

Posted by Setsuled at 12:39 PM
Email ThisBlogThis!Share to TwitterShare to FacebookShare to Pinterest