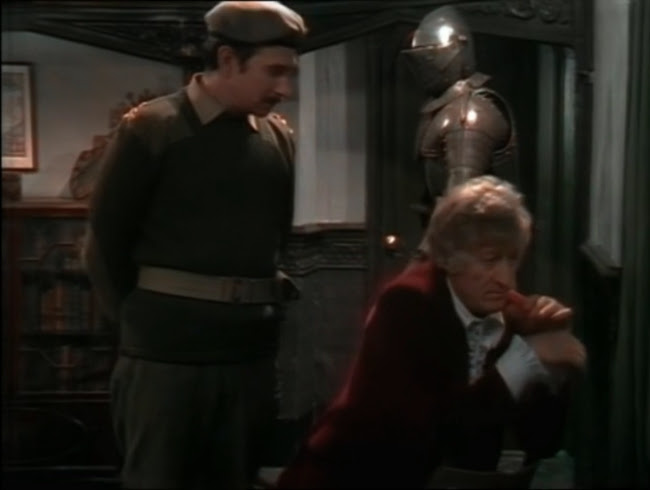 Is evil something inside a person that can be extracted, leaving behind a basically decent individual? One of the many Science Fiction and Fantasy stories to tackle this question is the 1971 Doctor Who serial The Mind of Evil. Featuring a typically overwrought plot from the villainous Master, and, as usual, a whole lot of business about the Doctor and his companion getting locked in cells, to escape, to get caught again, to escape again, it's nonetheless a really good serial, one of my favourites from the Third Doctor era.

Last time I watched this one it was in black and white but in 2013 there was a colour restoration involving technical details beyond me. The gist, I think, is that some kind of transmitted colour info was somehow recovered for five of the six episodes. The first episode was then given the old fashioned colourising treatment and it shows. 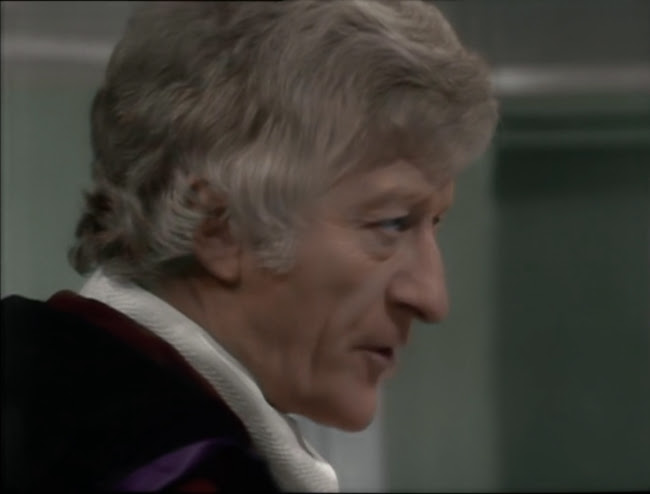 Everyone has that orange rouge look with strangely saturated blue eyes. But it works well enough for the first episode. The subsequent episodes look more like typical Jon Pertwee era colour footage except there's occasionally a subtle wavering in the image. If you'd like to see it yourself, I've been watching Doctor Who lately on Amazon via BritBox which is just over six dollars a month. It has the Jeremy Brett Sherlock Holmes series as well and a lot of other things, it's a pretty good deal if you live in the U.S. and want to see a lot of classic British television. 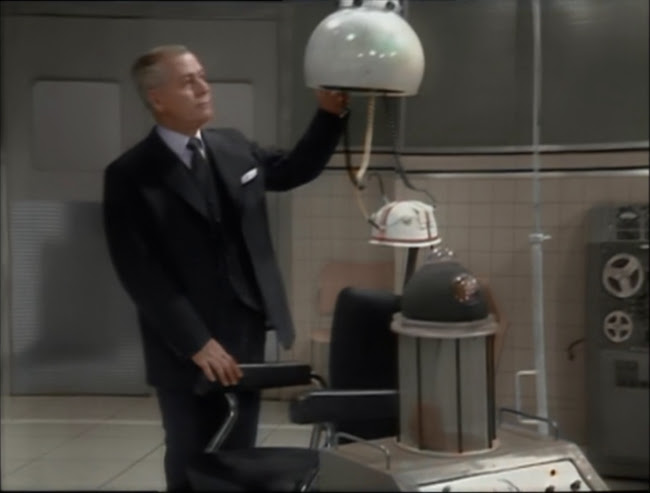 It seems like the late 60s and early 70s were a big moment for discussions on behavioural modification. It was around the same time Kubrick's adaptation of A Clockwork Orange came out. A few years earlier, the famous Star Trek episode, "The Enemy Within", came out in which evil Kirk turned out to be ruthless but good Kirk turned out to be uselessly passive. 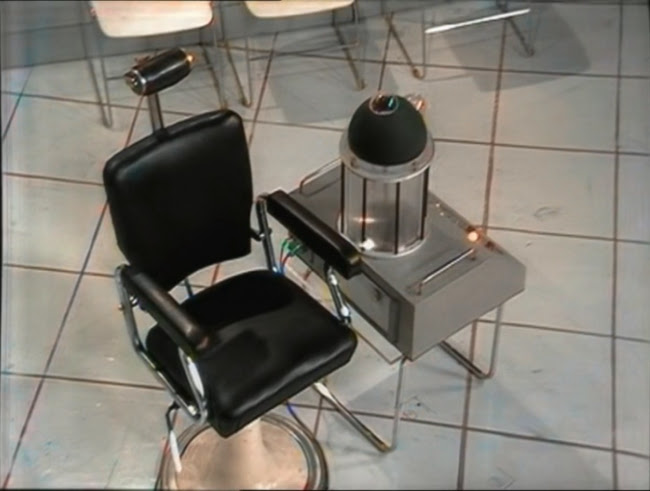 The Mind of Evil begins with a similar idea as we join the Doctor (Jon Pertwee) and his companion, Jo (Katy Manning), viewing a demonstration at a prison where an experimental machine extracts evil impulses from a prisoner named Barnham (Neil McCarthy). Like good Kirk, Barnham is generally left without any ability to take control of situations--unlike good Kirk, he's generally rendered more childlike. At one point he does attack another prisoner threatening Jo and the Doctor and the Doctor is forced to stop Barnham from killing him. Perhaps the point is that Barnham's childishness has given him a dangerous moral purity. 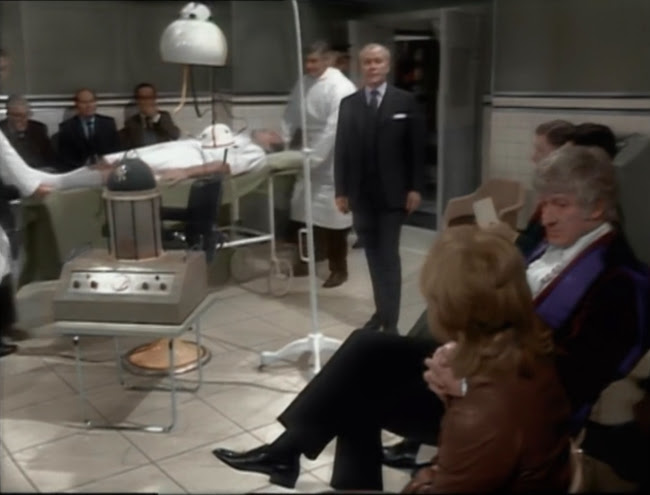 There are a lot of subtler ways in which the serial criticises moral purity. Pertwee's Doctor, like all other incarnations, doesn't like to use guns though he did famously use one in Day of the Daleks. At one point in this serial, Jo actually tries to give him a gun and his response is interesting: "No, thank you. You were trained to use those things, they only make me nervous." In addition to not fitting well with narratives that would retroactively claim the Doctor was once incredibly sexist, it's not a statement about how guns inevitably make things worse. Instead it's a curious acknowledgement that guns might be necessary in the right hands and that he, the Doctor, simply isn't qualified to use them. Not that we actually see Jo use guns very often but it's still a nice moment. 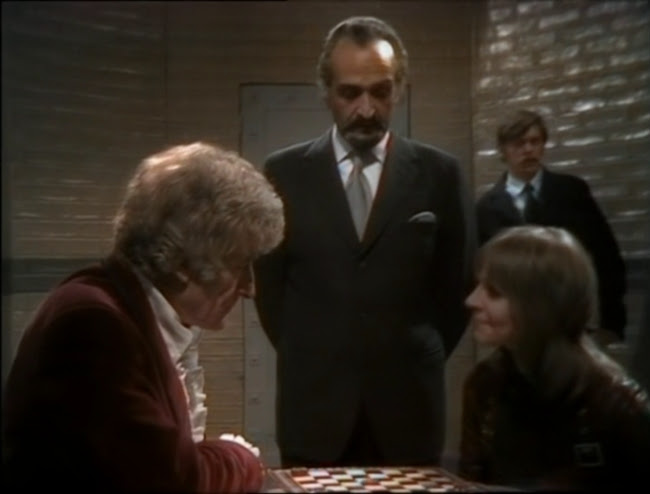 Of course, the Pertwee era prominently featured military protagonists, particularly in the form of Brigadier Lethbridge-Stewart (Nicholas Cortney) who appeared in nearly all the Third Doctor serials. The dialogue between the Doctor and the Brigadier often provided a nice opportunity for writers to portray a philosophical conflict between passivism and the need to use force, an argument the Doctor implicitly ceded to the Brigadier often as not. Near the end of this serial, the Doctor grudgingly thanks the Brigadier for saving his life by firing on his assailant. 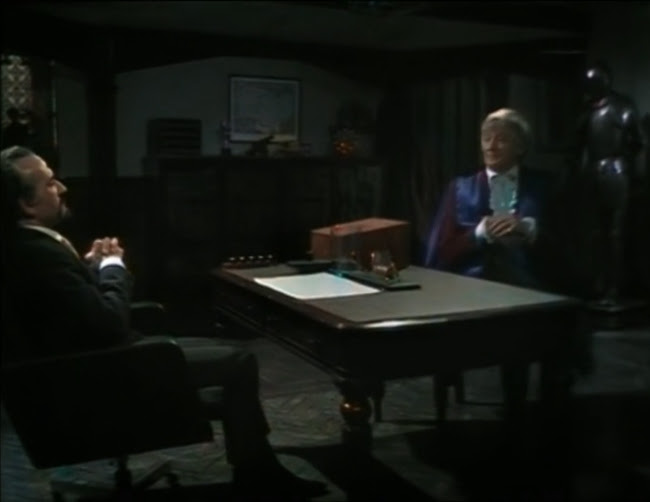 This is also a serial that plays off the subtle friendship between the Doctor and the Master (Roger Delgado). As much time as they spend talking about the disgust they feel for each other, they still look quite cosy chatting across a desk before the Doctor flips it over in one of the action sequences Pertwee was particularly good at. When they team up briefly to fight against the machine, they both speak in tones of mutual respect. 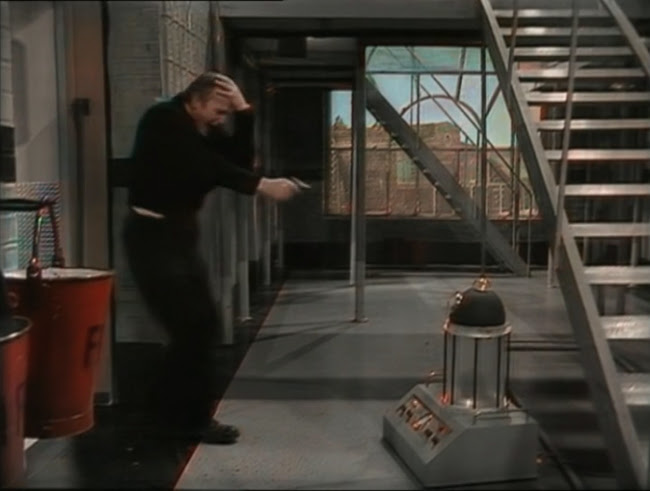 The machine is somehow part of the Master's confusing plan to disrupt international peace talks occurring in London and have a nuclear missile delivered to the prison. As the machine absorbs evil from individuals, it grows more powerful, exuding a telepathic force causing debilitating fear in everyone within a certain radius. Much of the first half of the serial deals with the Chinese delegation and one among them, a woman named Chin Lee (Pik-Sen Lim). The Master uses hypnosis on her, vaguely amplified by the machine, to turn her into his minion. 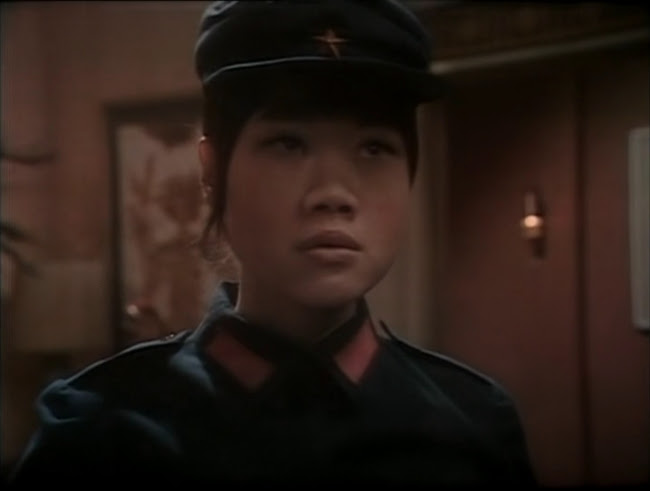 Hypnosis was a big part of the Third Doctor era--both the Doctor and the Master used it. Here it makes some thematic sense if not plot sense of the Chinese delegation's involvement in this story. Conspicuously wearing People's Army uniforms, Chin Lee and Fu Peng (Kristopher Kum) criticise the barbarism of the Americans and the British. Since the serial was released in the midst of China's Cultural Revolution, it's easy to draw a comparison to how a monster to root out evil in individuals would project waves of destructive fear.

The early morning ropes retrieved the box.
A meal beside the building holds the toy.
As tech ignites the phone it cools the locks.
The thinnest hand could craft a timely ploy.
A love relayed through scattered plants astounds.
Above the swaying bark, a hut resides.
The fighter plane returned as strumming sounds.
Guitars appeared in undergrowth and tides.
Between the hands the growing eye's absorbed.
A timely watch returned a pocket full.
A dozen planets taunt the weathered orb.
A Morris dance concludes with Jethro Tull.
Tornadoes twist the cap and drain the cup.
Delusions swell and swallow houses up.

Posted by Setsuled at 2:54 PM
Email ThisBlogThis!Share to TwitterShare to FacebookShare to Pinterest