A Rebel's Journey Through Time 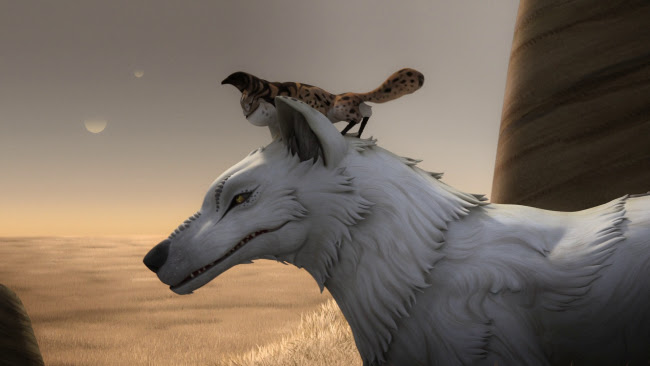 One thing was made clear by last night's two new Star Wars Rebels episodes--the show is a lot better looking than it was in season 1. It looks about as good now as Clone Wars looked in its last couple seasons so I guess Dave Filoni finally convinced Disney it was worth spending money on a show like this. If only Rebels had the same calibre of creative talent when it came to writing. 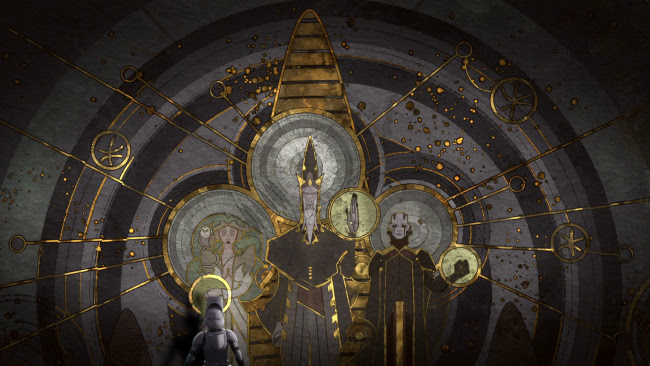 I watched the "Rebels Recon" followup interview package that went with these two new episodes. Dave Filoni, showrunner on Rebels and nominally on Clone Wars, wrote and co-directed last night's two episodes and in the interview segment he talks about how the "Mortis Gods" featured in the episodes were created by George Lucas for a story arc on Clone Wars. Not my favourite arc from Clone Wars as it happens. They look pretty cool and I like design of the mural but I don't really like the vaguely Catholic Holy Trinity aspect of the Mortis Gods. It is, however, another example of the show leaning on teases of things Lucas came with to try to string us along with Ezra's (Taylor Gray) story. An even better example is when Ezra enters the cave, hears a bunch of soundclips from all over Star Wars history, and then saves Ahsoka Tano (Ashley Eckstein) from her duel with Vader via a time portal on what looks like a great Mario Kart map. 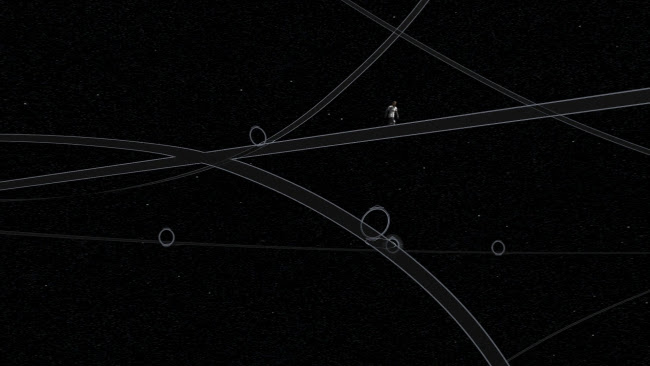 So they actually came up with an explanation for that lame jump in time at the climax of season 2. I only wish Ezra had reached further back to when Ahsoka had her original face. I'm glad she's alive, hopefully in her next incarnation she'll look like herself. There was a little while where Rosario Dawson was rumoured to be up for a life action Ahsoka, something I whole-heartedly endorse. There is a real physical resemblance and Dawson is one of the most under-appreciated actors of the past thirty years. 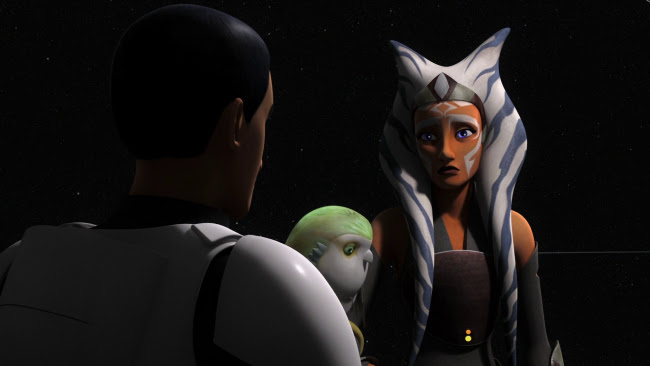 Anyway, of course Ahsoka being there is all about Ezra and her teaching him how to let go of Kanan. I guess if Ezra's voice didn't annoy me so much, and I wasn't so bitter about how Ahsoka's been relegated to an advisor role on this series, I could've found the moment poignant. Ezra's one of two elements that Filoni seems to consider a point of deep personal expression, the other being those Loth Wolves. 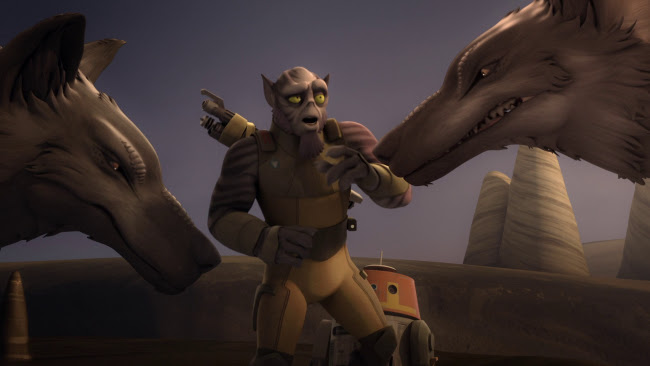 If only they didn't look exactly like the wolves from Princess Mononoke, something I'm far from alone in noticing. It invites a really unflattering comparison for Rebels. So far they've been transport and quest givers on Rebels, nothing like the truly fascinating dramatic conflict from the Miyazaki film about the need for humanity to exploit nature for survival. But last night's episodes of Rebels did introduce an interesting Imperial character voiced by Malcolm McDowell. 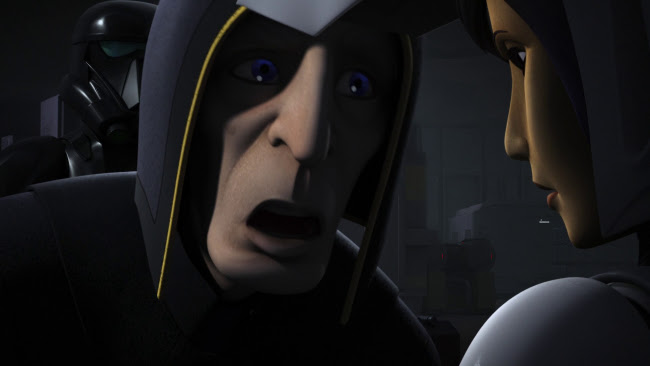 Until he inexplicably had a stormtrooper knock Sabine (Tiya Sircar) in the head I liked how he was actually trying to win her over instead of immediately going for the slobbering Nazi interrogator thing. Though here, as I have since the beginning of the series, I found Sabine's attitude about art insulting. In season one we were supposed to take her Sixth Doctor colour palette as a sign that she was just so creative and rebellious, and now she says that everything about art has meaning, like it's a secret code only artists can read. I did like how the score seemed almost to be quoting Raiders of the Lost Ark when she and Ezra were looking at the mural, though. 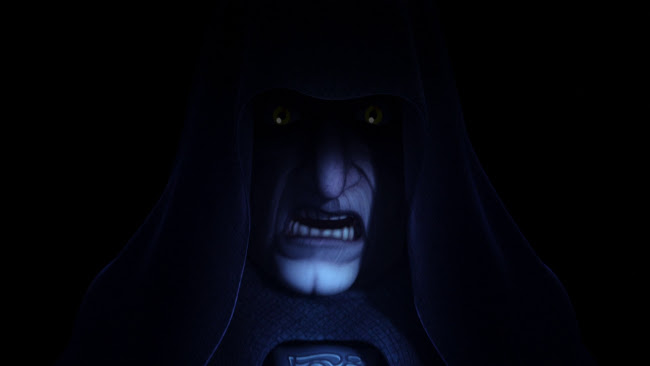 Ian McDiarmid returned as Palpatine, the Emperor, last night, which was great, though his moments felt a little deflated. Being absent for the whole series, and absent in Rogue One, has lent him some mystique that felt kind of squandered by him showing up to have a chat with McDowell's character. And the idea of him caring so much about Ezra seemed ridiculous. 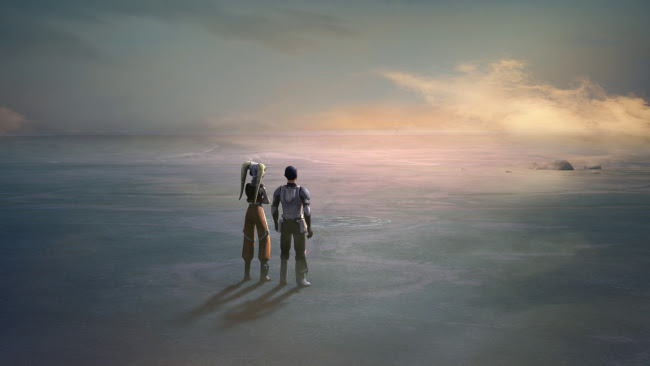 This moment at the end with Ezra and Hera (Vanessa Marshall) was nice, though. Really pretty. I hope Ezra dies early on next week so I can enjoy these visuals without him around. I hope his eyebrows fall off when dies, like that guy from FLCL. 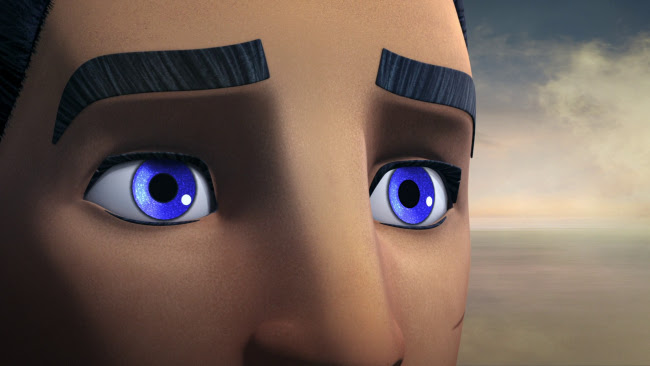 A quarter candle's lit for later ghosts.
The fire shades support a nymph and swain.
Into the ceiling reach the leafy hosts.
A deep above, a pitch as blood contained.
A string denotes the brow against the paint.
A struggling wind revived the ancient drapes.
Recumbent wrists in darkened heat were faint.
The silhouettes in plaster burned their shapes.
The blurring branches blend behind a tree.
Tornadoes smaller than the dream approach.
The second leaf in ev'ry bush can see.
A watchful ceiling cloud amassed reproach.
A shadow's budget broke the paper dogs.
A velvet fire's stitched to velvet logs.