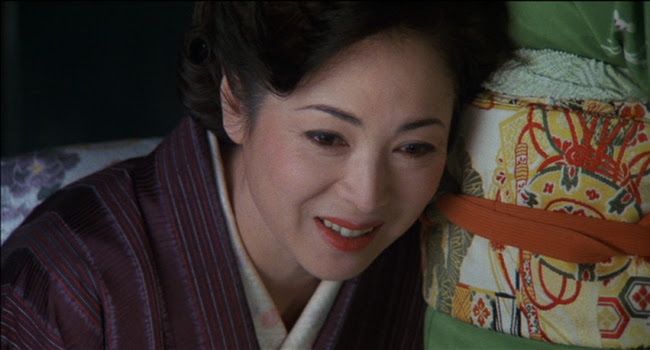 If you want to spend over two hours basking in the glory of some of the most beautiful kimonos ever made you should watch 1983's The Makioka Sisters (細雪, "light snowfall"). This beautiful Kon Ichikawa film is also a very fine, delicate satire that seems to poke fun at pre-World War II Japanese society more out of affection than anything else. It is a criticism of old social class but seems to come from a place that beholds errors in human systems tenderly and relishes in the beauty that arose from them. 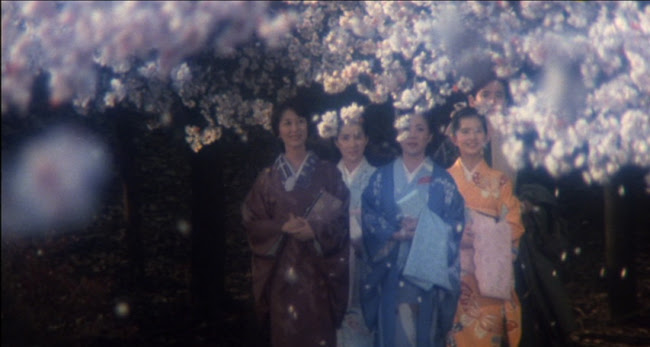 There are four Makioka sisters, the Makioka family having been a prominent merchant family that once dealt in kimonos. The sisters now live off the inheritance and status of their deceased parents, most of them hoping to continue the lifestyles of aristocrats, avoiding having to do work for a living. This, though, turns out to be a big job as the eldest two sisters, Tsuruko (Keiko Kishi) and Sachiko (Yoshiko Sakuma) are increasingly frustrated in their efforts to find a husband for the third daughter, Yukiko (Sayuri Yoshinaga). 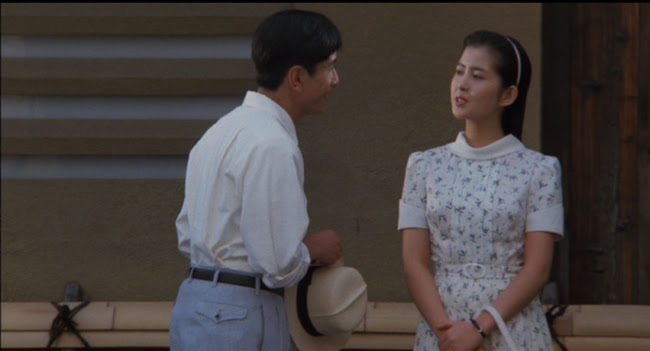 The youngest sister, Taeko (Yuko Kotegawa), wants no part of this old fashioned nonsense. According to tradition, she can't marry until all of her elder sisters are married but she's already tried to elope with one young man, something that resulted in scandal when the two were caught together in a hotel. She wants to be given her dowry now so she can finance her dollmaking business, desiring not to be dependent on her family name or fortune. 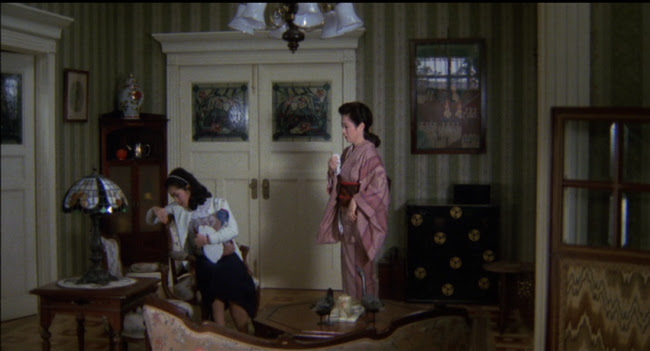 Taeko makes it even more difficult for the elder sisters to find a respectable husband for Yukiko, especially since the newspaper that had originally reported on the scandal had accidentally printed Yukiko's name in place of Taeko's. Yukiko is as well behaved as Taeko is rebellious but matchmaking efforts are continually, sometimes amusingly frustrated. In one of my favourite scenes, Sachiko, Yukiko, and Sachiko's husband, Teinosuke (Koji Ishizaka), meet with a potential suitor who works in a government office that regulates taxes on fisheries. 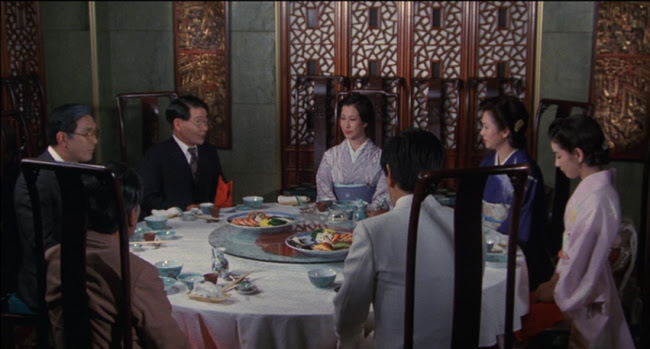 The palpable anxiety of the Makiokas is broken during lunch when, after what seemed like small talk about different kinds of fish, the suitor abruptly mentions his knowledge of the newspaper article that reported on Taeko's attempted elopement--but he does so entirely to make a point on the importance of recognising the distinctions between different kinds of fish. 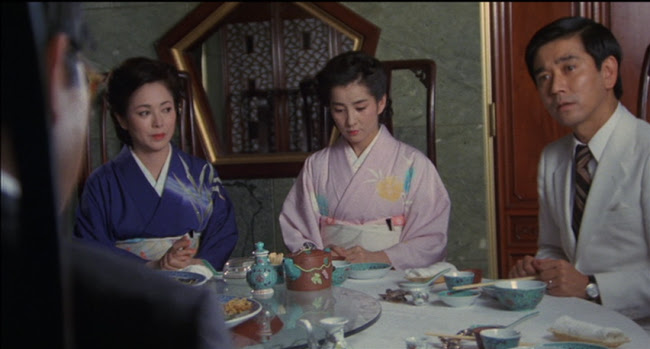 Watching Sachiko's and Yukiko's faces subtly fall as they realise this man is much, much too weird to be suitable is one of the keenest examples of this film's humour. Another good example is a running gag involving the servants. The ideal of the almost invisible helper who fetches things and answers phones is replaced here by the reality of having total strangers in the home. Virtually every time one of the Makiokas does or says something potentially embarrassing she's bound to suddenly notice a slack jawed servant unabashedly gaping at her in shock. 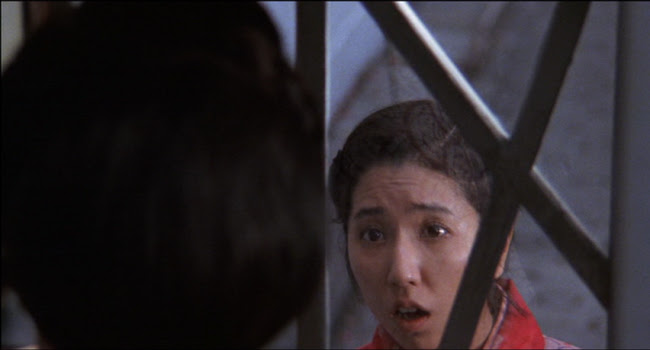 This also serves to defuse normal sources of dramatic tension in really funny ways. In one scene, Sachiko quickly rushes down the hall after seeing her husband getting a little too physically intimate with Yukiko. After stumbling over a stool in the kitchen (another running gag) Sachiko grabs a kiwi and crushes it in one fist, only noticing a servant frozen in astonishment when she starts furiously munching on the green pulp from between her fingers. 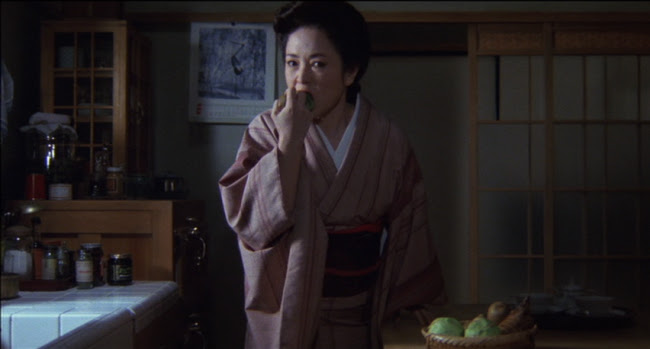 The imagery of this scene, as well as the curiously understated, unselfconsciously sexual play between Yukiko and Teinosuke would have made the scene fascinating enough. Capping the moment with the slightly broader comedy of the servant somehow seems to punctuate the subtle, kind of adorable madness of the household, especially as Sachiko's final word is to sincerely upbraid the servant for buying the wrong kind of onions. 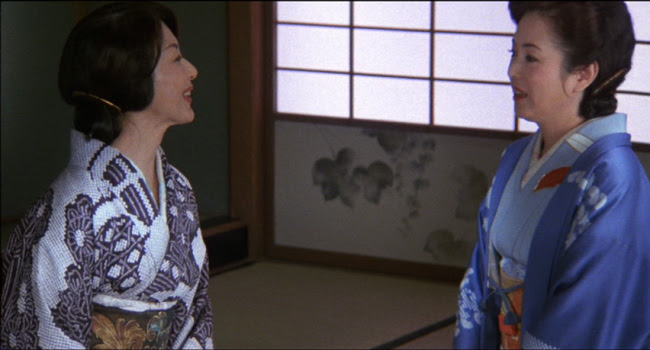 This film would be worth watching for its visual beauty, alone, though. The gorgeous actresses are dressed in one stunning kimono after another, a visual cue of the Makioka family legacy. They inhabit scenes of perfect colour coordination and it's a pleasure just watching them wait in perfectly decorated rooms or walk under trees. 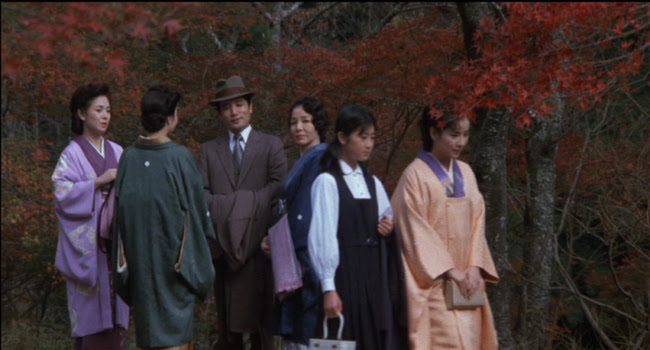 The bread invented last announced the wheat.
It's passing grain beyond the temple crown.
A place for seeds to find a fertile seat.
The stony island walls conceal the town.
A finished boot's within a shrinking tent.
The sign denotes a bar designed for life.
Specific taverns built to break a Lent.
A bottle goddess builds a boozy wife.
Unanswered phones assemble 'long the bay.
The sand produced a ship that never sailed.
From side to side the crabs'll cede the way.
And all imprisoned seas cannot be bailed.
The squeaky sheen disrupts a wooden bell.
But verdant branches grace the forest well.

Posted by Setsuled at 12:40 PM
Email ThisBlogThis!Share to TwitterShare to FacebookShare to Pinterest