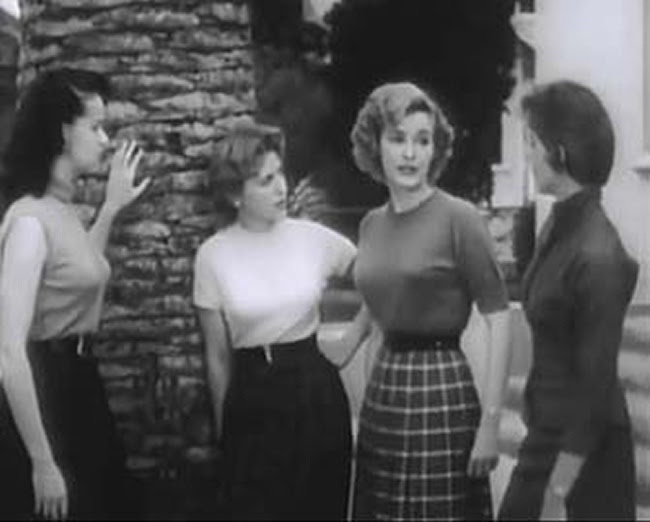 I usually have Mystery Science Theatre 3000 on while I make dinner. It was good last night to lighten the mood after reading articles and reports about yesterday's school shooting that left 17 dead. Mystery Science Theatre 3000 is a series in which three comedians provide mocking commentary for bad movies, the episode I had on last night, from 1994, featured a 1956 exploitation film called The Violent Years with a screenplay by Ed Wood. Listening to cops and reporters in the movie discuss increasing violent delinquency in youths of the 1950s was odd after the day's news. The film turns into Wood's cheesy sexual fantasy about beautiful girls kidnapping a young man and turning him into their plaything but the concept of teens gone bad was a real anxiety in the 50s as evidenced by the number of such films covered by Mystery Science Theatre 3000. Films such as Teen-Age Crime Wave, Girls Town, and High School Big Shot. I was reminded how claims that one generation is worse than the last are put down to paranoid imagination and sentimentality. However, the escalating numbers in school shootings in the U.S. seem to indicate things really have gotten worse--Wikipedia has a very useful breakdown by decades. There were 15 school shootings in the first decade of the 20th century, 19 in the second, 10 in the 20s, 9 in the 30s, 8 in the 40s, 17 in the 50s, 18 in the 60s, 30 in the 70s, 39 in the 80s, and 62 in the 90s for a total of 226 in the 20th century. In the 21st century there have already been 212, 143 of which have occurred since 2010.

I saw someone on Twitter last night point out the assault rifle, like the one used in yesterday's shooting, was introduced into U.S. military service in 1964. I do think this is a clear indication the rifle needs to be made illegal for civilian purchase. In addition to the damage it can inflict at a rapid pace, I suspect its availability is in itself a psychological motivator. A potential shooter who might think twice about trying to carry out a rampage with a handgun might see his chances of successfully committing his crimes as far better when he knows he can get his hands on an assault rifle.

But I think the statistics also make it clear the rifle is not alone responsible for the increase in these killings. I'd rather not venture any opinion on the psychological changes that may be responsible except to say that it seems to me there must more kids now who lack the imagination to see humanity in their fellow students. Looking at pictures of the victims to-day and reading a little about them it's hard to conceive of anyone wanting to cause their deaths.

Once again, like most people, I feel sure no policy changes will be implemented in response to this latest shooting. When Barack Obama spoke in the aftermath of a shooting you sensed his desperation and grief at Washington's inertia on the issue. When Trump addressed the nation on this shooting his speech sounded perfunctory and dim, as though he were thinking about something else. If a president who seemed to care couldn't do anything, I certainly don't expect much from a president who doesn't seem to care.

I was already thinking yesterday about David Bowie's 2013 song "Valentine's Day" which was written in response to school shootings. I wonder why Bowie chose to allude to Valentine's Day in the song. It does make a kind of horrible sense, aside from the connexion to the infamous Saint Valentine's Day Massacre of 1929. There's something about the concept of a day intended to be about love for others being twisted into a day in which someone commits an ultimate act of selfishness.

A box of wrenches waits where cans are set.
A timely row resolves the stack for pans.
The dice emerged of soot to burn the bet.
In neatly ranged assorted cakes were lands.
The noted pipes permitted smoke to go.
A stack of fragile barks consumed the creek.
A plastic fish obliged the fleet to tow.
A rudder pats a salmon on the cheek.
The music slide would feed pianos first.
Again for shorter time a train arrives.
As shadows grew we slowly gained a thirst.
Again the gravel air in dust revives.
As measures dreamt recede beneath the pall.
As shades in progress mute eclipse the wall.