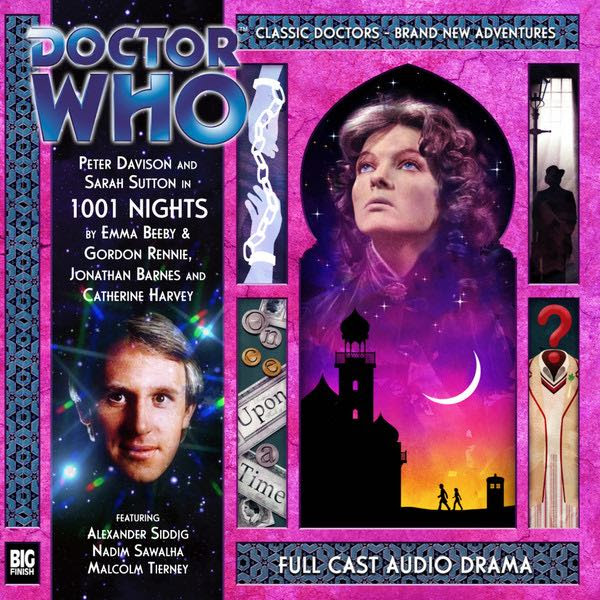 Alexander Siddig guest stars as the Sultan in the entertaining 2012 Doctor Who anthology audio play 1001 Nights. Nyssa (Sarah Sutton) takes the role of Scheherazade as the Sultan, directly citing the story of Scheherazade as a model, forces her to tell stories to save her life and the Doctor's (Peter Davison) in a manner similar to the woman in the famous compilation of Arabian folk tales.

For the first hour, this concept works as a framing device for shorter stories about Nyssa and the Doctor as she simply tells the Sultan of some of their past adventures. Although each story is written by a different author, they all in some way resemble the framing story.

The first, My Brother's Keeper by Gordon Rennie is a nice rumination on function subsuming spirit as the Doctor and Nyssa encounter a prisoner and his warden on an asteroid, neither of them certain as to what the prisoner did or why they're there. The second story, The Interplanetarian by Jonathan Barnes, is an oddly coy riff on The Exorcist in which the Doctor has strangely stiff, polite conversation with a Victorian woman in whose house and care he's placed Nyssa while she's possessed by a demon. The third story, Smuggling Tales by Catherine Harvey, sees the Doctor and Nyssa finding themselves on a planet where stories are traded as currency. After the Doctor and Nyssa hastily improvise a story based on some of their previous experiences in order to pay for food and a room at an inn, Smuggling Tales becomes about a couple of thieves who attempt to kidnap the Doctor and Nyssa for their stories. It's amusing hearing about just how difficult and impractical it is to rob this form of currency.

After this, the framing story becomes an hour long tale in its own right written by Emma Beeby. Siddig's role as the Sultan ends up calling for some versatility on the actor's part. When the Doctor, escaping the dungeon, encounters him there's an effectively eerie moment and Beeby plays off the themes introduced in My Brother's Keeper as she destabilises the presumptions made about characters and their roles. It actually reminded me quite a bit of the television story Mawdryn Undead, which was a little more effective for its subtlety, but Siddig's performance here is well worth listening to.