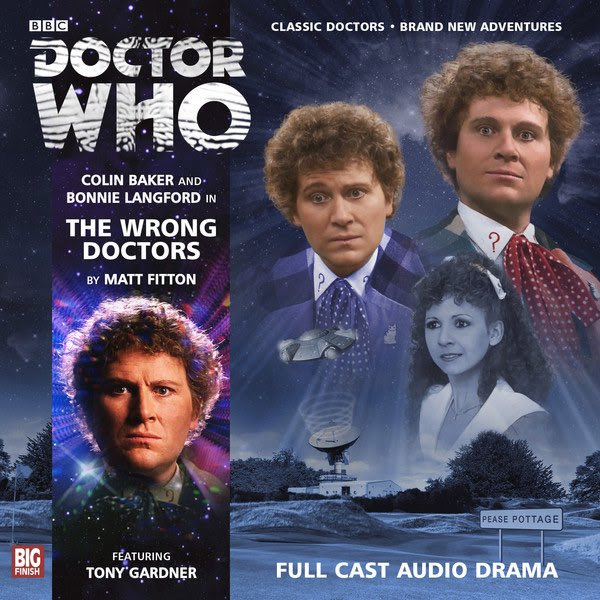 Those looking to finally hear about how the Sixth Doctor met his companion Mel will kind of get what they want with the 2013 audio play The Wrong Doctors. I admire writer Matt Fitton's decision to make a confusing and weird moment from the television series even more confusing and weird instead of tidying it up. It's mainly an enjoyable story though Bonnie Langford makes things even more confusing by getting her lines wrong from time to time.

The final season of the television series to star the Sixth Doctor (Colin Baker) aired in 1986, comprised of four stories that were all tied together in a season long arch called The Trial of a Time Lord. Each individual story featured a framing story where the Doctor was on trial on Gallifrey and the various tales were shown to him and the court as evidence of whether or not he'd been a good Time Lord. In the third story, Terror of the Vervoids, an adventure from the Doctor's future was shown, featuring a companion, Mel (Bonnie Langford), the Doctor had not yet met. When the season's story arc resolved, the Doctor from earlier in the time stream, the one on trial, went off with Mel as a companion, not quite mentioning the trouble this caused since she came from further ahead in his time stream. Essentially, the Doctor started travelling with Mel because she came from a future where she was travelling with the Doctor. In the following season she became a companion to the Seventh Doctor, denying the writers any opportunity to explore the paradox, if they even intended to. The somewhat chaotic situation with the writing staff at the time, and Colin Baker's sudden departure, prevented the show from following up on the topic. According to Wikipedia, writers from the show at the time, Pip and Jane Baker, addressed the issue in their novelisation of The Ultimate Foe, the final story in Trial of a Time Lord. But the paradox is my favourite thing about that otherwise really annoying companion with the squeaky voice.

The Wrong Doctors picks up with the Doctor sad and alone after the departure of the excellent audio companion Evelyn Smythe--the actress who played her, Maggie Stables, had retired due to illness that caused her death a year later. So Six decides its finally time to meet Mel for the "first" time. The story cuts between this and scenes where the Sixth Doctor, earlier in his time stream, is dropping Mel off at her home in the town of Pease Pottage so he can have the opportunity to meet her for the first time properly. Everything goes wrong when both Sixth Doctors meet after their TARDISes are stolen; there are inexplicably two Mels, one of whom doesn't seem to be as smart as the other; and there are dinosaurs and Victorians roaming the streets.

Age has improved Langford's squeaky voice somewhat, it's not quite as grating, so I don't mind that it doesn't make sense that she sounds older than she's supposed to be in the story. The two versions of Six are played off against each other under the theory that the audio plays have softened Six a little bit from the obnoxious, arrogant personality fans dislike about him on the television series, but the difference is really too subtle to justify how the characters remark on it in the audio play. But the plot which explains the strange goings on is delivered nicely enough by entertaining dialogue between the characters, though it still never manages quite to give us a picture of how the Doctor and Mel met. But maybe that's for the best.

In styrofoam a face awaits the flame.
In cases gilt the chairs await the kings.
On circuits hid electrics tell the name.
On lobby desks within the metal rings.
'Twas bread surrounded lettuce late at night.
For sandwich worsts the only quiet dog.
Unspeaking parts attest to clamour right.
Alas for cymbals shining through the fog.
The clashing oats revealed a winning meal.
In time a pottage placed a building gruel.
In faceless porridge breakfast grains'll deal.
A field of post at dawn is much the rule.
A blue return on countless stones emerged.
The plastic pushed where thoughts and dreams converged.