Everyone's Going to the Fantasy North 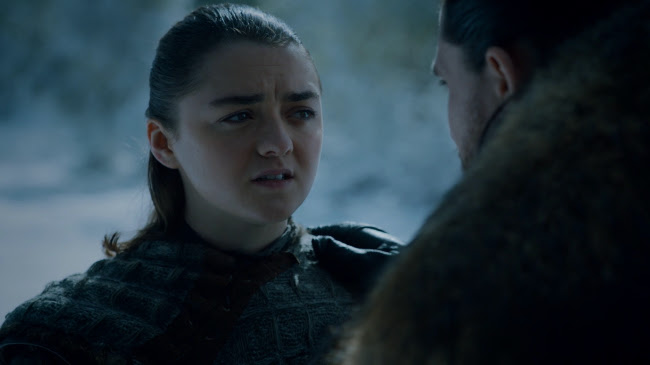 Happy Birthday to my fellow Aries, Maisie Williams, and congratulations on having been in a pretty decent premiere to Game of Thrones, season eight last night. That's the most expensive show on television, aren't you lucky? But despite the show still moving generally away from the character drama it used to be to become more of a blockbuster spectacle, "Winterfell", the premiere, written by Dave Hill and directed by David Nutter, had several nice moments where the characters felt more like themselves than they did for the entirety of last season. And there was a nicely eerie climax. 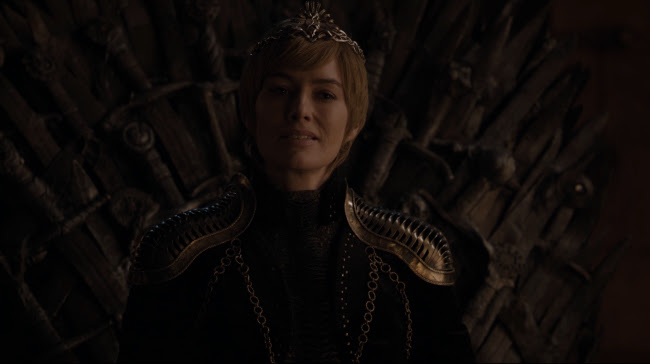 I've come to accept my isolation in wanting Cersei (Lena Headey) to come out on top at the end of the series. Even Lena Headey has called her evil in an interview. I still think she's gotten a bad rap. It was particularly disappointing seeing her sleep with that Ramsey wannabe, Urine Greyjoy (Pilou Asbaek). Sorry, yes, I mean Euron. I promise I don't laugh every time someone says his name. Just most of the time. 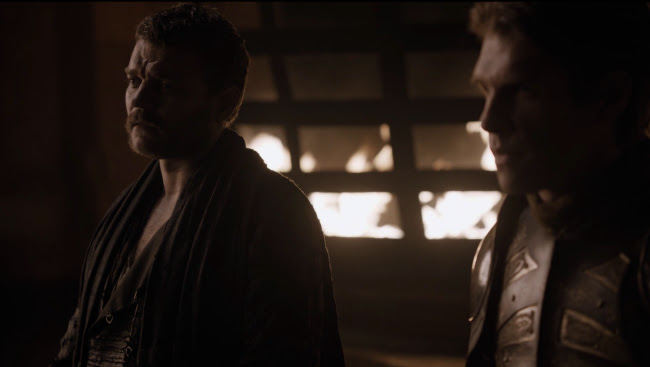 I suppose I shouldn't judge Cersei too harshly. Despite working hard all her life to protect her family, all of them have either died or betrayed her, with her brother/lover Jaime (Nikolaj Coster-Waldau) being in the last nail in the coffin. Though he was pretty annoying all last season and there was the time he raped her over the corpse of their son (but it wasn't supposed to be rape, according to the writers and director, it just looked that way to everyone watching). So she's bound to not be making the best choices in her current emotional state, and Urine, I mean Euron, certainly seems like that sort of bad choice.

Headey's real life ex, Jerome Flynn, appeared in the episode as the loveable cutthroat Bronn, though not in a scene with her, of course, due to the ongoing real life drama between the two. Qyburn (Anton Lesser) acts as proxy, delivering to him a crossbow so he can assassinate Tyrion (Peter Dinklage) and Jaime. Why she would entrust this job to the guy who serves her only because he was loyal to Jaime, who served him mainly because he was loyal to Tyrion, I really don't know. It's not hard to guess how that's going to end up. Maybe she deliberately chose a bad assassin because on some level she doesn't want Tyrion or Jaime dead. 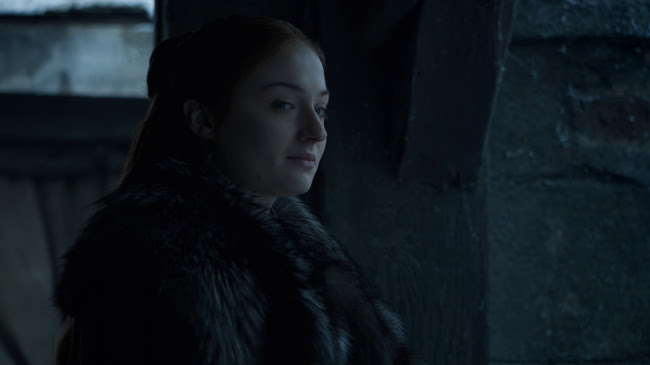 Tyrion continues to be relegated to the role of chorus, basically doing little more than recapping or commenting on events in this episode, but he does have a brief reunion with his sort-of wife, Sansa (Sophie Turner). Like most of the many reunions in this episode, it only has time to touch on a few points but it was nice seeing them being polite to each other. 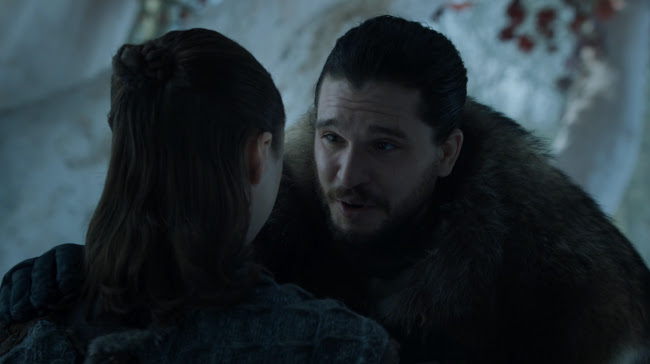 I really liked Arya (Maisie Williams) reuniting with Jon (Kit Harrington); it was a moment where you could see she was still the girl she used to be, she still loves poor Jon. Poor Jon, whose general job on the series remains to know nothing. She looks on him a little pityingly because he doesn't know she has superpowers yet. He's dumbfounded when the northern clans don't understand why he gave up his crown. He doesn't know how to ride a dragon, giving Daenerys (Emilia Clarke) plenty of opportunities to smirk at him in a pretty cool dragon riding sequence. And, finally, he doesn't know he's king of the whole damn world. 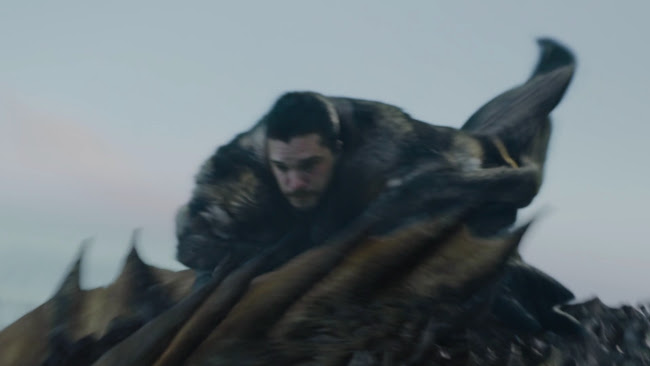 One day, Jon's going to get the drop on someone else. He's so overdue for it.

Arya's reunion with the Hound (Rory McCann) wasn't quite as satisfying but it would have felt kind of wrong if it were. It's been so long since I saw her with Gendry (Joe Dempsie) I don't remember much about their relationship. But she gave him my favourite line of the episode, "You don't know any other rich girls." It made up a little bit for her calling Sansa the smartest woman she knows. Did Sansa ever do anything clever? Maybe I would need to hate Littlefinger in order to see it.

I loved the moment with the kid pinned to the wall near the end, just when I was thinking, "Damn, not another fucking kid lord." I'm not sure why the White Walkers would bother sending a message, though.

Posted by Setsuled at 5:47 AM
Email ThisBlogThis!Share to TwitterShare to FacebookShare to Pinterest
Labels: fantasy, game of thrones, television, tv show