For Trees are Not Dead Things 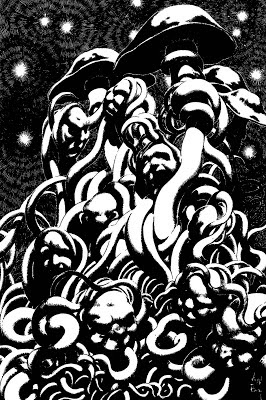 I read the new Sirenia Digest this morning which contains an excellent new story from Caitlin R. Kiernan, "Metamorphosis C". In her prolegomenon, she discusses how it's a follow-up to "A" and "B" from 2006 but I found myself thinking of it as a followup to last month's exceptional story in the Digest, "Which Describes a Looking-Glass and the Broken Fragments". Both beautifully construct a fantasy world to make some very sharp points--in this case, "Metamorphosis" makes a point of showing how effective art can be in terms of its influence.

"For books are not absolutely dead things," as John Milton famously wrote in Areopagitica, "but do contain a potency of life in them to be as active as that soul was whose progeny they are; nay, they do preserve as in a vial the purest efficacy and extraction of that living intellect that bred them." Certainly that must be true of an author like Kiernan who has talked many times about how she labours carefully over the construction of every sentence before continuing to the next, so it could very likely be said that her fiction writing is the most purely preserved extraction of her intellect. "Metamorphosis C" is a stylistic delight as well as an intellectual, though, being an example of a kind of Lovecraftian noir Caitlin excels at, the colloquial, conversational voice rattling about bizarre and degenerate threats serves as a nice palate sullier for the rest.

There's a switch in narrator from the guide in the first part, leading a second person to a mysterious oracle or seer of some kind, to that second person. From there the narrative takes on another layer as we find the sought after merchandise is a story, the implicit idea being that the perspective inherent in the story has made it seem worthy of suppression. And then the story itself is about perception, a perception of nature that allows the destruction of nature to seem more worthwhile than its preservation. The fascinating thing about this is that it doesn't merely condemn the destruction of nature but the path of misconception, based on paranoia, that brings someone to destructive acts. There's also a potent reference to Ovid's Metamorphoses and his story of Apollo and Daphne, a version that's a lovely mixture of the horrific and beautiful. A very nice new Digest.