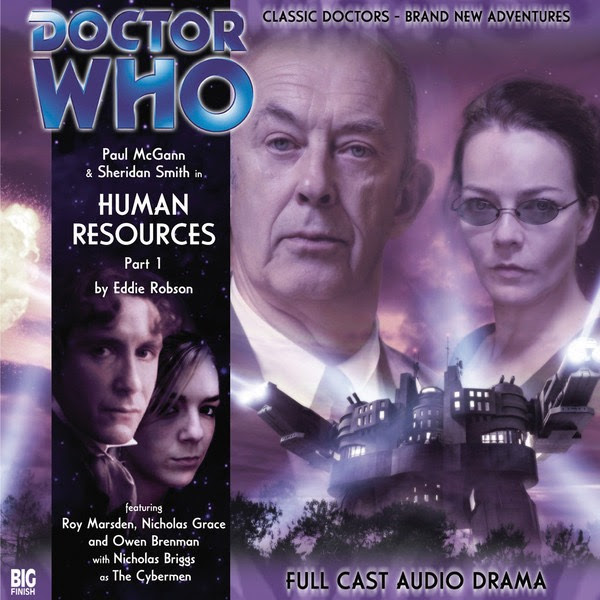 The Eighth Doctor's first independent audio series concluded in 2007 with the two part story Human Resources. What starts as a fairly amusing homage to The Office turns halfway through into a pretty effective encounter with one of the Doctor's classic foes.

Lucie Miller (Sheridan Smith), who became companion to the Doctor (Paul McGann) at the start of the series, had before that been applying for work in data entry for a company called Hullbert Logistics. In Human Resources, she's abruptly forced into accepting the job and her memories of her adventures with the Doctor are blocked. The story then proceeds to follow her and her co-workers making dumb puns and goofing on their clueless boss who enthusiastically spews tone deaf advice and encouragement a la David Brent or Michael Scott.

The Doctor eventually infiltrates the office (with some help from the Time Lords) as part of the management team and is surprised, when sitting in on a strategy meeting, to see that the team are coordinating invading troops without consciously realising it. This concept, that people are hypnotised into thinking they're working in some kind of civilian business when they're really organising an army, makes less and less sense the more it's explained. But the actors, particularly McGann and Smith, make it a lot of fun and when the story shifts it because an interesting survival fight I won't spoil.

In level blinds the light resides in peace.
Across the table shadows point to chairs.
The frying pan is lately mostly grease.
In nightly bursts the oldest channel airs.
A story starts in snow and ends in ice.
Between is cold and swamp and sodden food.
The number five appeared for counting twice.
A metal skull can kill a loving mood.
The seven balls of rice create the eighth.
Another copy makes complete the poem.
There's something 'bout the bread that makes it safe.
There's something 'bout the paper makes it home.
A group of pages turned to make the air.
The ink could turn the lousy weather fair.