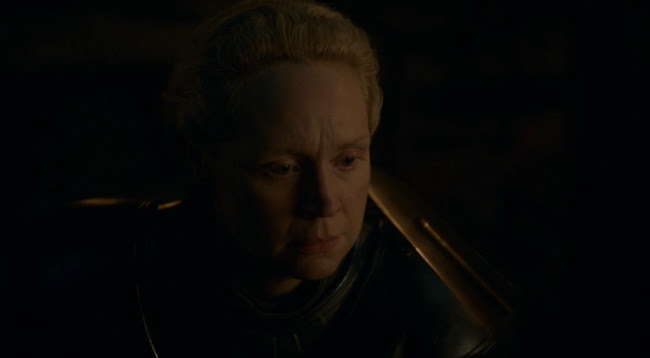 In "A Knight of the Seven Kingdoms", last night's new Game of Thrones, it seemed like knights and kings were all over the place. Just one place--the whole episode took place in Winterfell as characters from most of the series' disparate subplots reconnected and addressed issues before the final showdown next week. It was a nice episode and any judgement of it must be tempered by a realisation of just how much material Bryan Cogman had to untangle and put into a coherent whole. 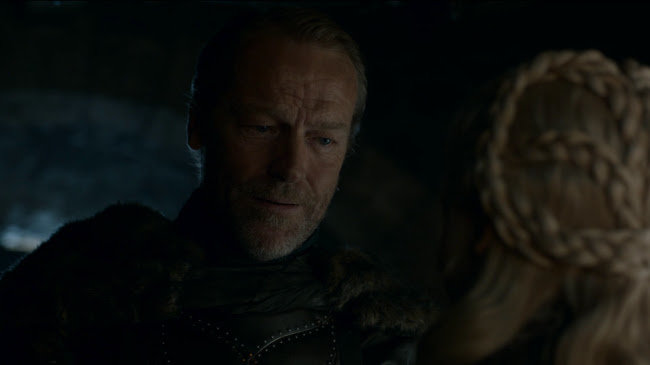 Jorah (Iain Glen) finally has a moment with that annoying little Lyanna (Bella Ramsey) that supports the fact that they're both from family Mormont. It feels more like a bit of trivia than an emotionally meaningful moment but I don't exactly expect anything emotionally meaningful from a silly character like Lyanna. Poor Jorah still feels short changed, though. Despite having a scene where he consults with Daenerys (Emilia Clarke) and mentioning that he was heartbroken about being passed over for the Hand of the Queen role, it still feels like the romantic tension that had been built up between the two in the first four seasons has just been jettisoned. It's a shame, I think Daenerys and Jorah would have much better chemistry than Daenerys and Jon (Kit Harrington). 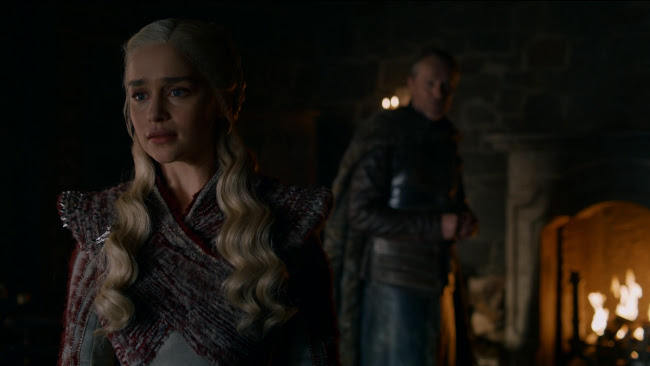 It was kind of funny last week seeing people criticise Jon and Dany's chemistry. I kept thinking, "People are just now noticing?" Judging from the conversation between Sansa (Sophie Turner) and Daenerys, the Khaleesi still misses the man she was forced to marry who raped her on their wedding day. It's weird how no-one remembers Drogo that way, especially in this age of outrage. It goes to show how subjective all this really is. 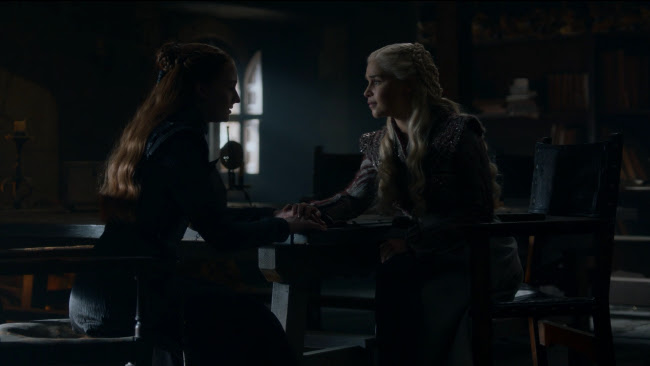 I couldn't help thinking how nearly everything Sansa and Daenerys said to each other was, at best, not strictly accurate, particularly the part where Daenerys observed that the two of them have both done really good jobs as rulers so far. If you can call running to Littlefinger for help before betraying him and the chaotic mess that is Meereen examples of good rulership, okay. But I guess they are two politicians now. 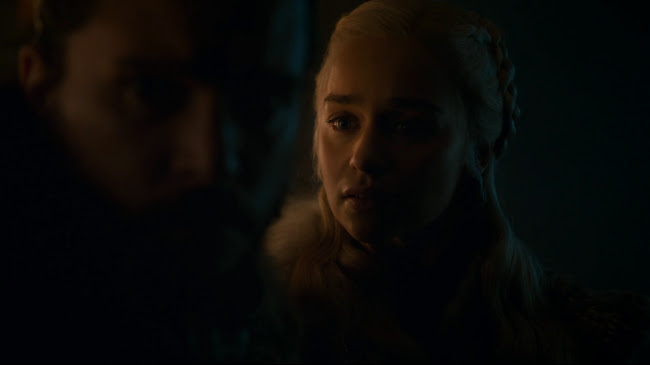 Jon's revelation of his heritage didn't seem to sit well with Daenerys, how inconvenient he delivered it just as the Night King was spotted approaching. That's two inconvenient kings. Meanwhile, Gendry (Joe Dempsie) got a much better reaction from Arya (Maisie Williams) when he revealed he was also a secret heir to the throne. It was nice seeing those two get together. 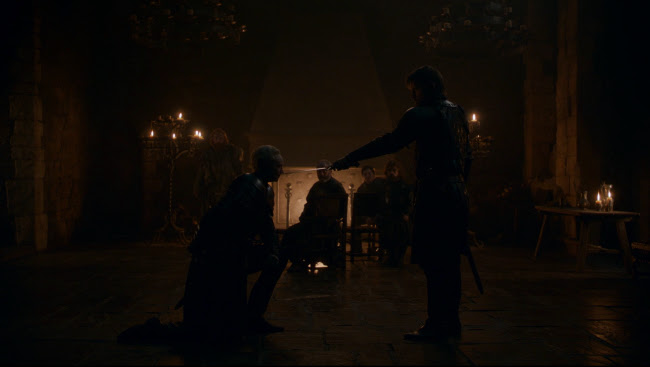 But the most emotionally satisfying scene was probably the one that gave the episode its title; the informal fireside meeting where Jaime (Nikolaj Coster-Waldau) confers a knighthood on Brienne (Gwendoline Christie). That was sweet and the same scene also had Tormund's (Kristofer Hivju) tall tale about how he got the name "Giantsbane" and ended with Podrick's (Daniel Portman) debut of a new Florence and the Machine song. Kind of an odd song for a kid like him to be singing and not one to exactly raise anyone's spirits but still a very nice moment reminiscent of Pippin singing to King Denethor in Return of the King. Which reminded me of reading an interview with Benioff and Weiss where one or the other said that the upcoming Battle of Winterfell was meant to outdo the Battle of Helm's Deep from The Two Towers. I guess we'll see next week. 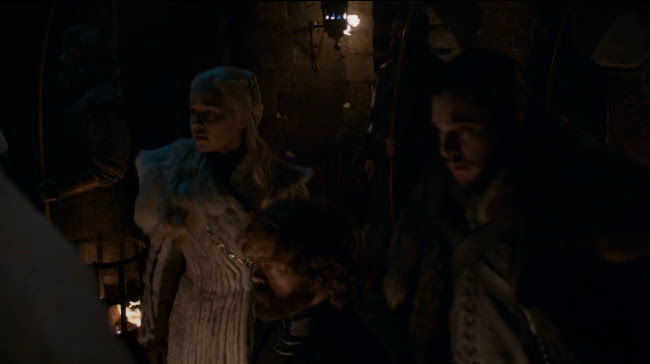 This seems like a good time for me to make predictions. Just don't blame me if you lose money. Next week I think Cersei's army will show up and save everyone. I think Brienne might get killed. I suspect the climax of the season will have it looking like Cersei's definitely going to be sitting on the Iron Throne until Jon sacrifices his life which somehow will lead to Daenerys taking the throne. And Daenerys will then either end up with Jorah or Tyrion (Peter Dinklage). Probably Tyrion. I'd like either one, though I sure feel bad for Jorah. I bet Iain Glen's happy he negotiated for the "With Iain Glen" in the opening credits way back when this looked like just another HBO series.

Posted by Setsuled at 5:59 AM
Email ThisBlogThis!Share to TwitterShare to FacebookShare to Pinterest
Labels: fantasy, game of thrones, television, tv show