One Being's Peace is Another's Confinement 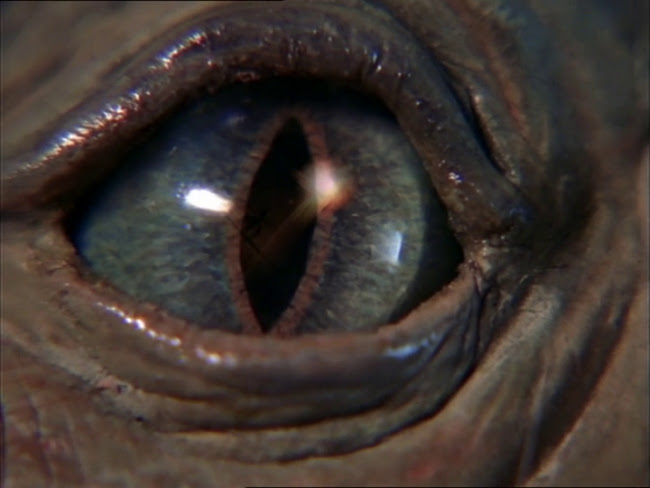 After being a joke for most of Farscape's first six episodes, Rygel's bodily fluids suddenly take on unexpectedly serious thematic power in an episode that deals with the lasting effects of long term abuse. At the same time, the relationship between Aeryn and Crichton starts to look more like romance because he has a brief dalliance with the title character of the episode. 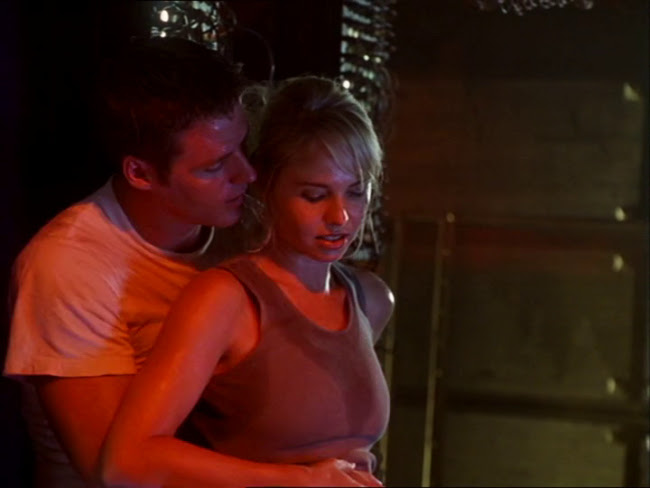 Gilina (Alyssa-Jane Cook) is at the receiving end of some of Rygel's bodily fluids, too, when he lobs a great gob of his disgusting spit at her face. Crichton (Ben Browder) is understandably angry at the little dominar (Jonathan Hardy), the human already feeling protective of the pretty young woman they'd taken captive aboard a wrecked Peacekeeper capital ship. But some detail and context change the meaning of the scene--Rygel had come upon Gilina and Aeryn (Claudia Black) defending the mission goals of the Peacekeepers as a force dedicated to establishing peace throughout the galaxy. 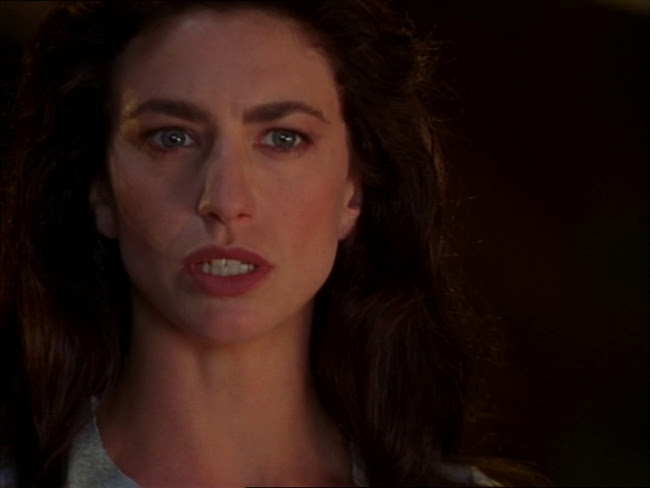 Though I like the story in this episode, the teleplay by Nan Hagan often picks words that just hit the ear wrong, as when Aeryn tells Crichton about how civilisations "hire" the Peacekeepers to keep peace. It may in a sense be true but there's clearly a moral element to the motives of the Peacekeepers so maybe it would have been better for Aeryn to say, "Civilisations enlist the aid of the Peacekeepers" or "Civilisations trade resources for Peacekeeper aid." Certainly Aeryn clearly regards her former comrades as more than mercenaries. 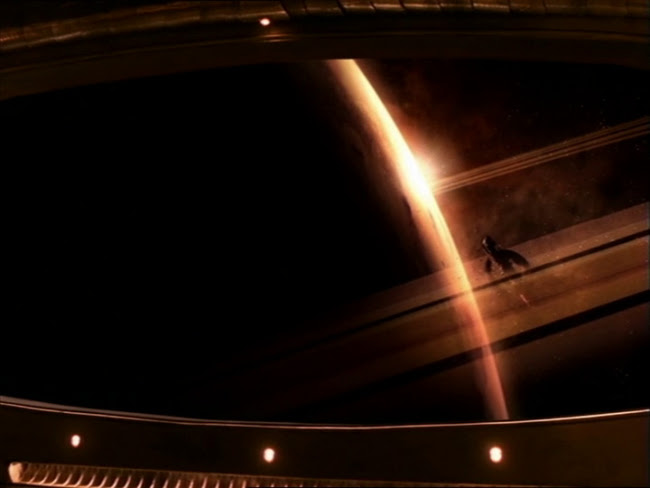 Once again, one member of this group of misfits is trying to assert a sense of identity, of belonging to a group in a way recognised by tradition and a shared cultural ideal. It's particularly bittersweet in watching Aeryn do it because she's permanently exiled from that shared dream--but to Rygel, the idea that anyone would pine for that identity is a frightening affront because he has spent over a hundred and thirty cycles (roughly equivalent to years) in Peacekeeper captivity in which he was subject to degrading torture. 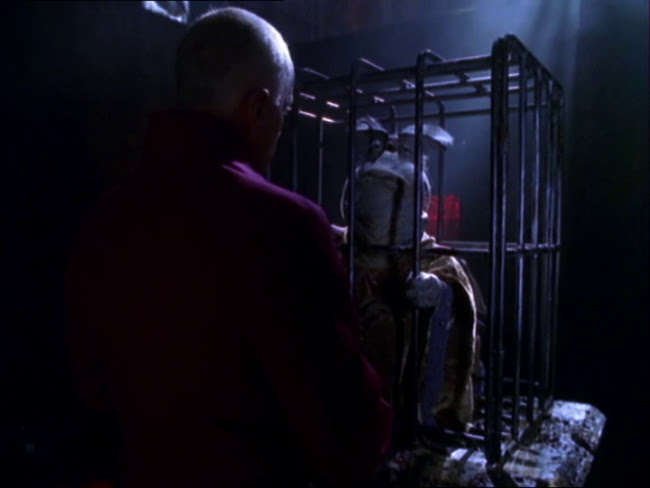 Rygel's assertions of his importance, of his title and claim to a throne, take on a new meaning when we consider that every time he talks like that he's fighting against another self-image, that forced on him by Durka (David Wheeler), a Peacekeeper captain and torturer. Rygel's hatred for the Peacekeepers is more than spite; he's afraid of being reduced to that condition again, not necessarily by action but by perception. If the Peacekeepers are great, then what is Rygel? 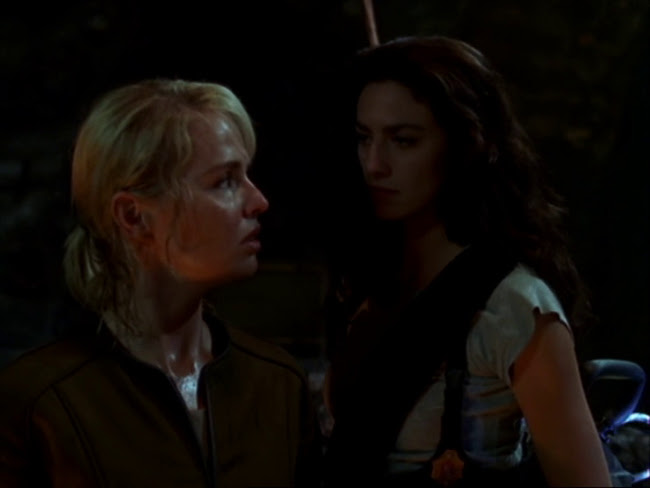 But obviously that's not what Aeryn wants. There's a contrast between her and Gilina, a rival in her affections for Crichton she didn't know she had until this episode--Gilina being short and not a warrior, she and Crichton make a much more traditional heterosexual pair than Crichton and Aeryn would be, a contrast emphasised when Aeryn comes upon them kissing while she's lifting heavy crates. 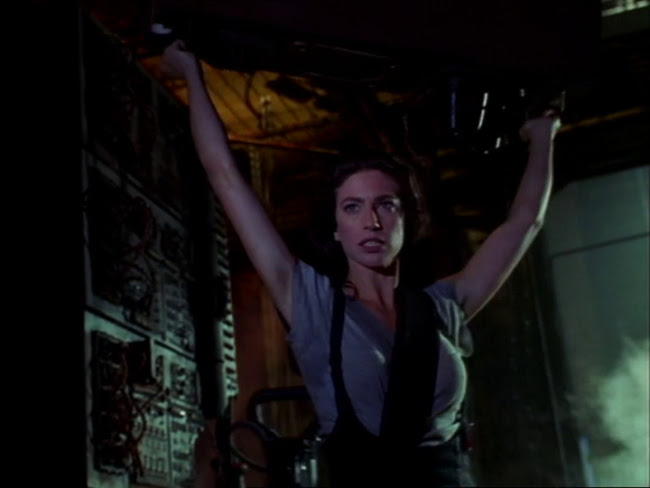 This is a contrast that likely has only meaning for Crichton as there's no indication the Peacekeeper culture has this kind of traditional male and female dichotomy. But for the viewer this helps generate further sympathy for Aeryn's vulnerability and there may be something of Crichton's own lamenting of his lost normal life in his attraction to Gilina.

This isn't one of the best episodes of the series but it introduces some of the story elements that make the series great. Alongside this, another alien species is introduced and there's an effective subplot about how this group of fish people scavengers with fire breath are trying to salvage the Peacekeeper ship.

Episode 1: Pilot
Episode 2: I, E.T.
Episode 3: Exodus from Genesis
Episode 4: Throne for a Loss
Episode 5: Back and Back and Back to the Future
Episode 6: Thank God It's Friday Again