The Doll Back at the Starting Point 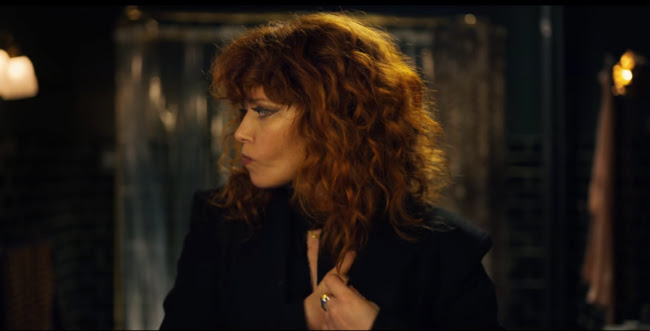 If you have to live the same point in time over and over, it's nice to have good company. Natasha Lyonne, star of the 2019 NetFlix series Russian Doll, fits the bill admirably. She is the chain smoking heart of a series that effectively combines observational humour, slapstick comedy, fantasy, horror, and psychological drama.

Lyonne, who co-created and co-wrote the series, stars as Nadia, a young woman who finds herself frequently meeting her demise only to magically reappear in her friends' bathroom during her birthday party while Harry Nilsson's "Gotta Get Up" plays.

Apparently a substantial portion of the show's budget went to paying for the right to use this song. It's nice to see a production that knows you need to spend money on things besides special effects and high profile stars sometimes, it's a perfectly chosen song--a better song than "I Got You Babe" but it works in the same way that track does in Groundhog Day. It's sort of wryly chipper, seeming to tease the protagonist by both sympathising with and failing to reflect her predicament at the same time.

It's not exactly like the Groundhog Day time loop--she's not repeating the same day over and over, she's constantly dying, more like in Edge of To-morrow. That film seemed like it was based on the experience of playing a video game and video games are part of the story in Russian Doll--Nadia writes code for games, including one impossibly difficult game that factors in later in the series. But this time loop feels much closer in tone to Groundhog Day--I would be very surprised to learn any of the writers are actually gamers. More than any other time loop story I've read or seen, Russian Doll feels like a sequel to Groundhog Day, a worthy sequel, to be sure.

It really feels like the writers watched Groundhog Day and said, "Okay, how can we develop these themes further?" Art criticism factors into the show a lot and at one point Nadia has a discussion about the potentially moral component of the time loop--Time, like morality, is subjective, as she points out in one clever line. And it's true, why should the universe align with her morality or anyone else's? In the end, maybe it's morality, or it could be interpreted as reality reflecting the protagonist's own repressed needs.

Natasha Lyonne, like Bill Murray, is a perfect comic foil for the circumstance. The time loop plot creates endless opportunities for her to do or say things we know any reasonable person would find crazy but we know are perfectly legitimate, so we can laugh along with her exasperation and well chosen witticisms. And then there's the slapstick; one episode sees her repeatedly falling down the same stairs and dying. The problem of it being unrealistic for a person to sustain so many injuries and still get up to crack wise is removed by the time loop plot device; the more realistic the calamity, the funnier it is.

The first four episodes of the eight hour series are 90% comedy while the second four are more horror and psychological drama, exploring Nadia's repressed issues with her mother (Chloe Sevigny) in ways that make the show feel like a live action version of Neon Genesis Evangelion, complete with an eerie, randomly manifesting child version of Nadia.

A second protagonist is introduced in the fourth episode, Alan (Charlie Barnett), who is also experiencing the same period over and over. This is a fun idea and it works well for both comedy and drama, factoring into the end of the series with a sequence that feels like it may have been inspired by The Merry Wives of Windsor--a homeless man Nadia befriends named Horse (Brendon Sexton III), whose life she tries to save like Bill Murray does with a homeless man in Groundhog Day, inexplicably wears a deer head near the end. The only sense I could make of it was that he was supposed to be Herne the Hunter, the mythological figure Falstaff dresses as at the end of Shakespeare's play. But Nadia is much more of a Falstaff character than anyone else on the show. I was thinking Lyonne seemed like a female Sam Kinison but Nadia compared herself in dialogue (written by Lyonne) to Kinison's arch enemy, Andrew Dice Clay. Either way, she's a breath of fresh air.

I think I might have preferred a lighter touch as far as the fantasy elements go in the last episodes but they are filled with good moments and intriguing ideas. The whole series is good.