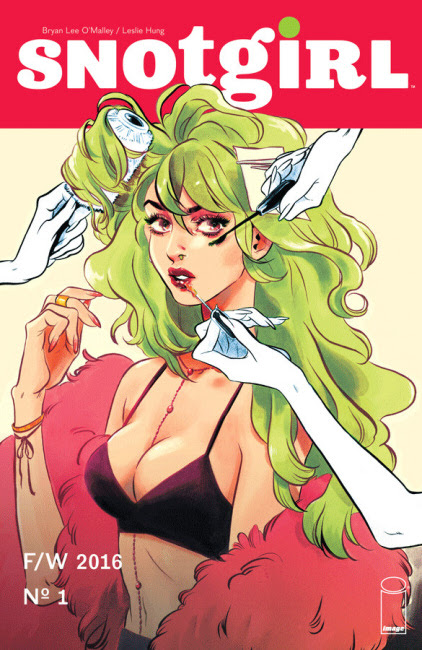 A neurotic fashion blogger has an embarrassing problem in Snotgirl, a comic series written by Bryan Lee O'Malley and pencilled by Leslie Hung. I finished reading the first two volumes yesterday, altogether collecting issues one to ten, and found the series enjoyable though not quite as good as I hoped.

The concept has an almost Hitchcockian sexuality to it. This beautiful, carefully maintained woman who is ashamed of her secret bodily secretions--and it's all packaged in something the average, morally upright reader would be comfortable talking about; allergies. Quite appropriately, no sexual comparisons are drawn in the surface text of the comic, though the series has plenty of sex.

Focusing on fashion blogger Lottie Person, the series includes a small cast of self-obsessed, shallow Internet personalities. The second volume details their misadventures at a fan convention with broad comedy following a psychological murder mystery in the first volume. There's a deliberate ambiguity about how much is occurring only in Lottie's head in the first volume; she meets a beautiful fellow blogger named Caroline whom she nicknames "Cool Girl"--but when Cool Girl discovers Lottie's secret allergy problems, there's a strange sequence involving a murder that may or may not have occurred. Meanwhile, Lottie discovers her former intern, Charlene, has been stalking her.

I was expecting a revelation that Lottie is short for Charlotte and that the three similarly named women--Charlotte, Charlene, and Caroline--were all aspects of a single personality or something but the revelation never came. Maybe it will yet in a future volume. The comedy feels a bit like a josei manga with its jokes revolving around a ditzy, shallow protagonist--I was strongly reminded of Moyoco Anno's Happy Mania. The art also imitates a manga style but while Hung makes decently attractive cover art she lacks skill for communicative facial expressions and either the time or patience to draw proper backgrounds. But she does come up with some fun outfits for Lottie that support the concept of her as a fashion blogger with her own line of apparel. 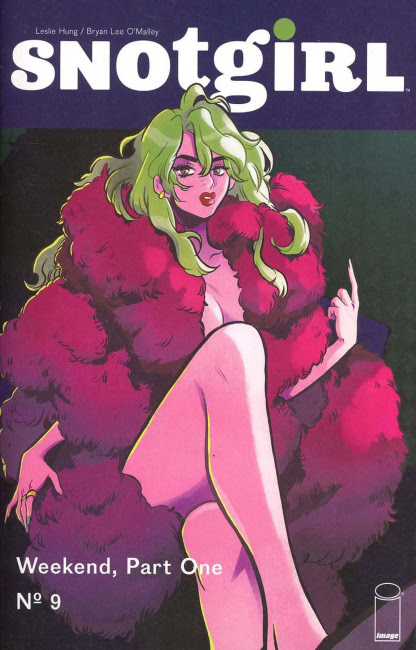 The series is ongoing, I'm not sure if I'll pick up volume three when I see it, but I might.

Assorted arms dispersed among the hands.
Elab'rate grids support the window panes.
An army's stitched with darkest velvet bands.
A body's strength is propped on bony canes.
Distinctions mount between unseen and gone.
Familiar time includes the mass's walk.
Committees joined to push the crucial pawn.
But movement mostly lapsed to looping talk.
A flash of blue and engines now depart.
A twilight tunnel takes the rider's face.
A careful tale the paper walls impart.
Discarded books regroup at glasses base.
Some visage peers beyond the swinging door.
A waiting patient sits within the core.