Bring Me the Head of John Crichton! 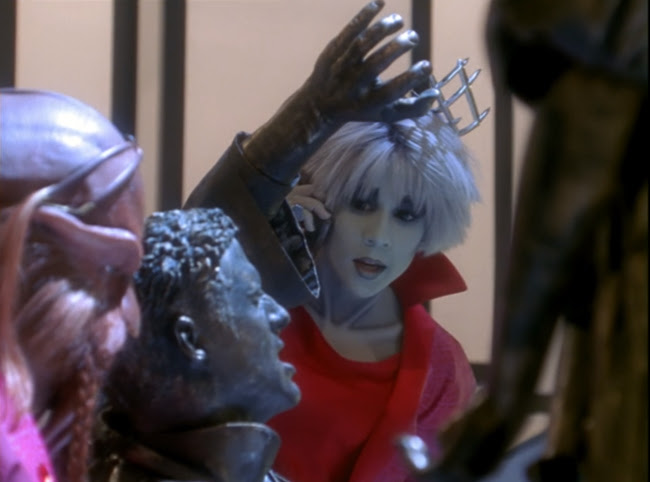 When Crichton's head is cut off, a variety of problems arise. The problem of succession is thrown into disarray and the Empress threatens to execute every off-worlder around, something that dampens Rygel's confidence considerably. 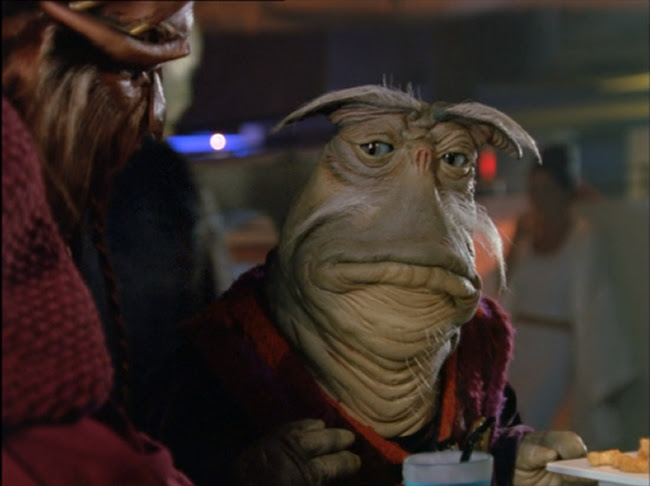 Aeryn's (Claudia Black) absent for most of this because she impulsively decided to go against her misgivings and actually go on a date with the guy who'd been bugging her since Part I. Things go even worse than she imagined, though, when they decide to go rock climbing and he ends up being a useless dweeb. While complicated machinations and action scenes are happening in the capital, poor Aeryn is forced to drag her injured date across the desert. 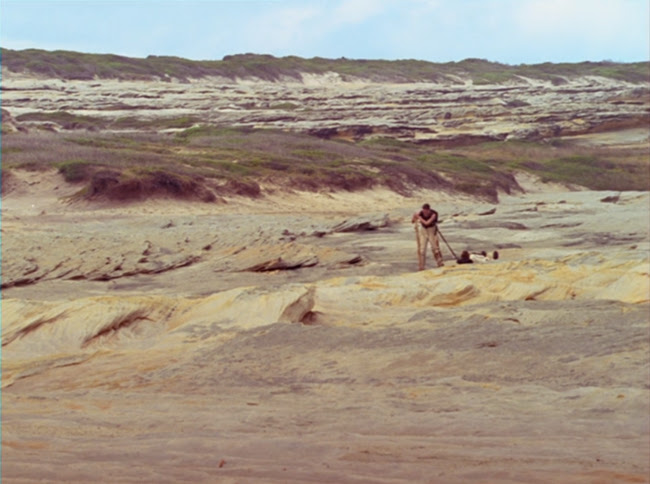 Crichton (Ben Browder) has a more successful tryst with Jena (Bianca Chiminello) who again rescues him with her martial arts. In fact, she rescues him from his rescuer, Scorpius (Wayne Pygram), who'd pulled his severed head out of a pool of acid. 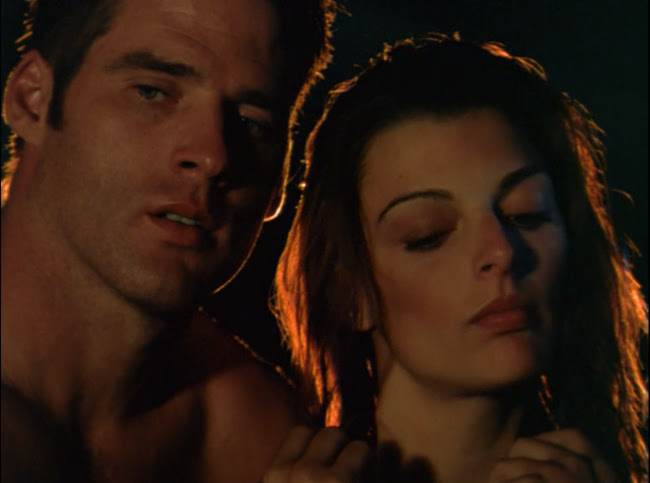 By the way, in case you forgot, Crichton was turned into a statue, which is why his head can get up to so much without his body and he's still okay when Jena "reconstitutes" him back into fleshy form. I wish they'd given him some terrible gash around the neck, though, or some other kind of creepy visual remnant of what happened to him. Maybe it wasn't in the budget or maybe the creative team just didn't want Crichton to have a noose scar for the rest of the series. 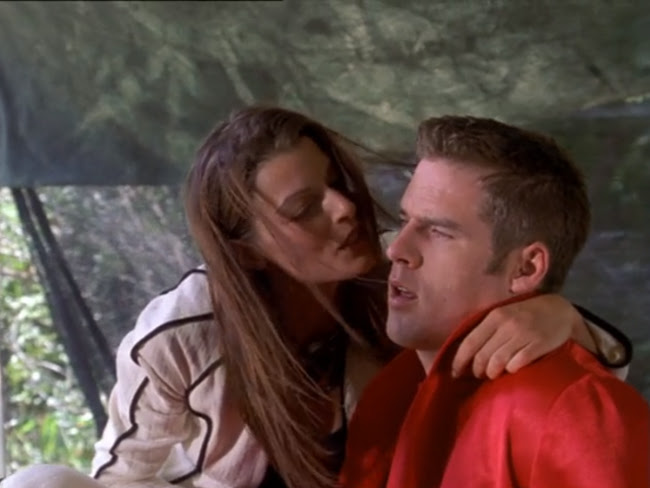 Anyway, why would Jena rescue Crichton from Scorpius if she's a Peacekeeper agent and Scorpius is a very high ranking Peacekeeper? I can only guess it's a sign of how much she's really attracted to Crichton, so much so that, after their night together, she presents him with the local kissing sauce, established in Part I as being able to show the genetic compatibility of two people. Season one had established that Peacekeepers routinely had loveless sexual encounters so it's a little surprising Jena is this into Crichton. It's even more surprising that she takes it so well when he rejects her with a simple "We're not compatible" after refusing to use the sauce. 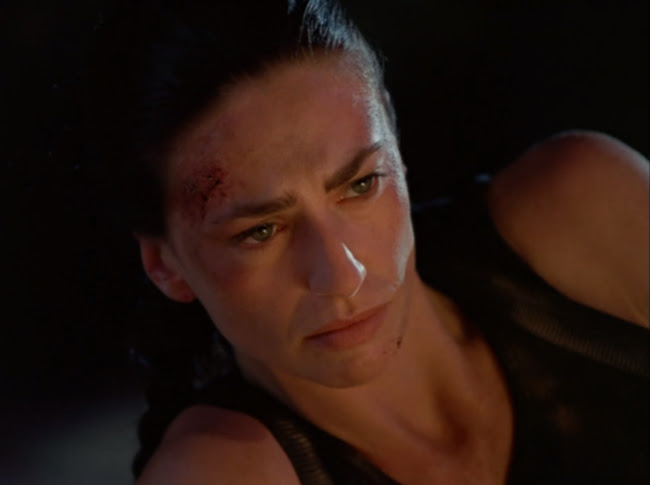 But thinking back to Peacekeeper sexual practices does make sense of what Aeryn's going through in this episode. It makes sense that she would be feeling afraid of a new sense of emotional attachment to Crichton despite the fact that she's sexually experienced and had slept with him several times. She really is in new territory. 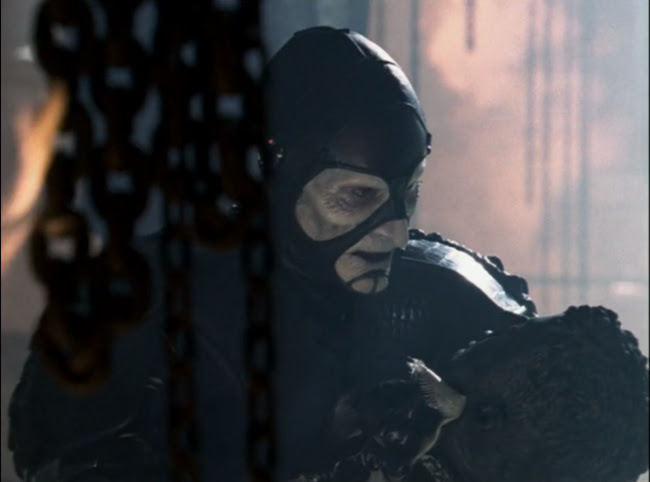 I do wish a little more time had been spent with Jena and her motives--maybe the writers intended to bring her back at some point and never got around to it. But reading more into the show than what's strictly there, one could surmise another reason she's so ready shoot at Scorpius is the xenophobia characteristic of the Peacekeepers which also makes Scorpius a misfit. This episode also reveals Scorpius' struggle for "thermal constancy" when the Scarran ambassador taunts him about it, an aspect to Scorpius' character I always liked. As previously established, Scorpius is half Sebacean, half Scarran. We know from season one that Sebaceans are vulnerable to heat--they experience "heat delirium" when it gets too hot--while Scarrans, apparently reptiles, thrive on heat and can produce waves of heat from their hands--which can be lethal or can be used as a truth serum. 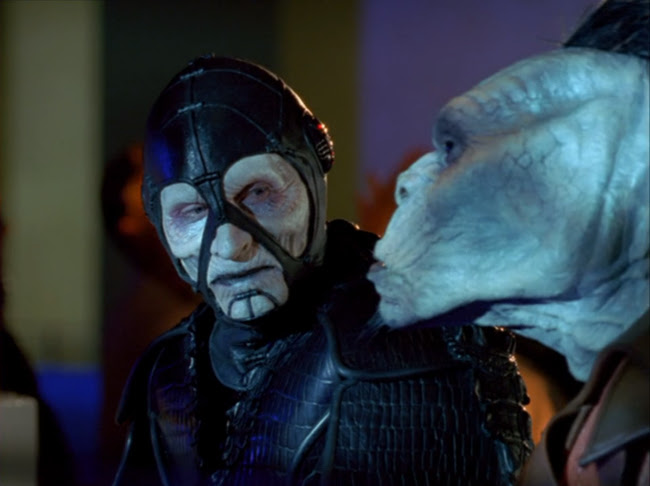 So Scorpius' very existence seems impossible. This explains his strange S&M suit and the coolant rods inserted directly into his brain. The series began with Crichton, D'Argo (Anthony Simcoe), Zhaan (Virginia Hey), and Rygel (Jonathan Hardy) all trying to find their way home. Then Chiana (Gigi Edgley) was introduced, someone trying to do just the opposite and escape from home. And now Scorpius is the ultimate misfit. It's actually kind of admirable he's so focused on getting the wormhole technology from Crichton's brain when he has so many other issues to deal with. 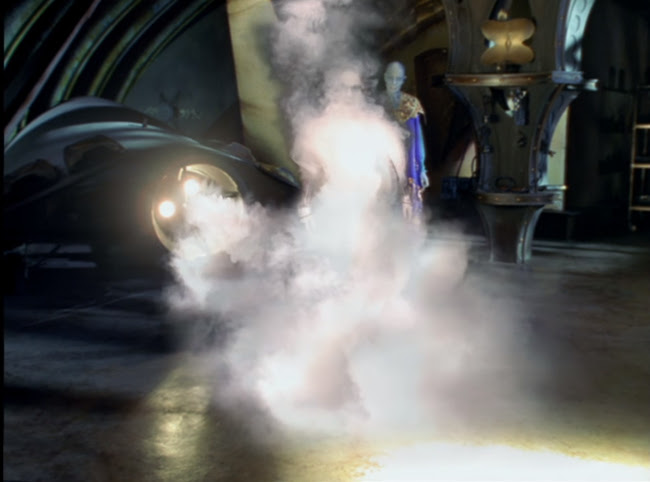 Meanwhile, the subplot about Moya's builder (Jonathan Hardy) wanting her to commit suicide is resolved. It turns out to be something like the reverse of God asking Abraham to sacrifice his son--it turns out the builder's whole purpose from the beginning was just to test Zhaan, who passes said test when she tries to kill "God", the builder. Zhaan is understandably not amused and I don't blame her for being unwilling to see this guy as a deity. But it's a thought provoking story. Is it really an analysis of religion or of just a sentient being pretending to be God? 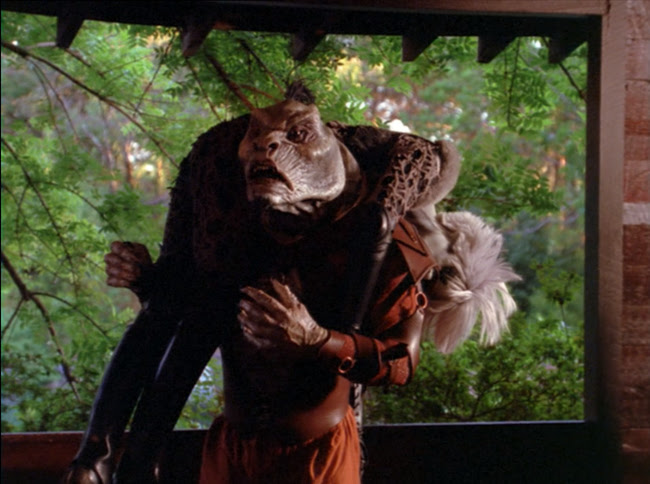 It doesn't quite connect with the main plot which concludes with Chiana becoming a damsel in distress, chained over the pool of acid by the Scarran who's desperate now that he's graphically murdered Prince Clavor (Felix Williamson). But, of course, everything resolves well enough for Crichton to agonise over the fact that he can't be turned back into a statue, a fate he's willing to undergo when he learns Princess Katralla (Felicity Price) has been impregnated by his DNA.

So concludes the three part episode and the three loves of Crichton are whittled back down to just Aeryn as the two swap kissing sauce in a nice scene at the very end where Aeryn's emotional journey comes to a surprisingly satisfying fruition.