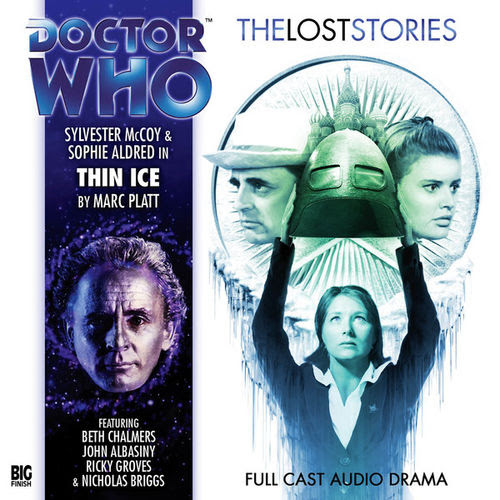 It turns out Communism doesn't work in practice even when your whole planet is red. The 2011 Doctor Who audio play Thin Ice draws a parallel between the 1960s Soviet Union and a generation of Ice Warriors--the hissing, green helmeted Martian natives--who have a sobering encounter with one of the founding, legendary figures of their society. Adapted by Marc Platt from his own teleplay, Thin Ice is based on Ice Time, the story that was to be the season opener of the 1990 season that never happened. If it were anything like the audio play, it would've been a pretty good serial.

This was also originally meant to be the last story for Ace (Sophie Aldred) and we finally learn the purpose behind the manipulations which the Seventh Doctor (Sylvestor McCoy) put her through in stories like Ghost Light and Curse of Fenric--he's grooming her to enrol in a Time Lord academy on Gallifrey. This seems to make it clear once and for all that "Time Lord" is a title, not a species, which makes sense, though, as usual, the script creatively dodges addressing whether Ace would be called "Time Lord" or "Time Lady".

Supposedly the TARDIS is knocked off course in an attempted trip to late 60s London--they get the time right but location ends up being Moscow. They make friends with a Soviet lieutenant called Raina (Beth Chalmers) and a cockney thief called Markus (Ricky Groves). The Soviets are trying to use some Ice Warrior relics to their advantage which of course results in resurrecting an Ice Warrior, a fellow named Hhessh (Nicholas Briggs).

Through all this, the Doctor is leaving more and more decisions up to Ace and we gradually learn why when we hear his secret conversations with a Time Lord Adjudicator (Nigel Lambert). Ace indeed has to make some decisions when she finds herself in the midst of Ice Warrior drama after an ancient leader called Sezhyr (Beth Chalmers) is resurrected in the body of Raina. Sezhyr's occupation of Raina's body underlines some thematic paralleling of the dashed early idealism behind the formation of the Soviet Union and an ancient, revolutionary group on Mars headed by Sezhyr. The Ice Warriors even start calling one another "comrade". Hhessh's realisation that he can't blindly submit to his group's imperatives is contrasted with Ace grappling with the need to take greater control of the situation as an individual. Naturally her decisions involve Nitro-9.

It's an entertaining story and the cast are great as always. Platt also, thankfully, rewrote the story so that it does not, in fact, mark Ace's departure.

A miller's stone adorns Tenochtitlan.
A floating crane alights beyond the state.
A squad of trees adrift support the swan.
A brig and sloop assist a second mate.
Selected stars appeared in mirror drinks.
The lightning froze to make somebody's veins.
The frozen air combined for skaters' rinks.
These summer thoughts diverge from proper lanes.
Prophetic rocks adorn the planet Mars.
A walking rabbit told a final joke.
A shave was sold behind the hidden bars.
A drawing's sequinned heart at last was broke.
Approaching tides harass the crabs and weeds.
An ancient drake subsumes a lizard's needs.