Rambling On Through 18th Century England 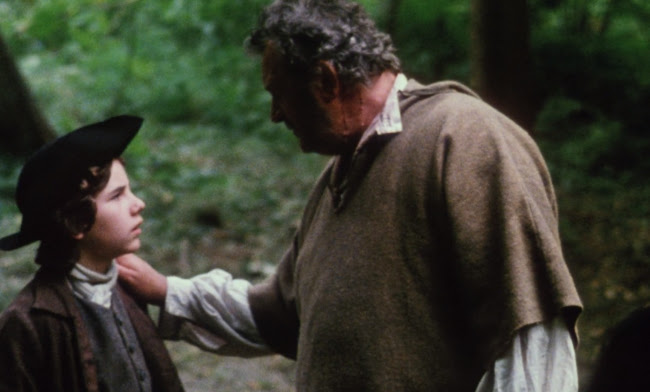 A big Frenchman, presumed dead, rises from a coffin, somehow not much startling the young draper's apprentice left to watch the corpse. The imperturbable lad joins the big man on the road with vague indications of reluctance in Ken Loach's 1979 film Black Jack. Apparently employing non-professional actors and displaying a dedication to natural lighting and locations, there's a Neorealist vibe to the movie, much like Loach's earlier film, Kes. Black Jack doesn't as successfully portray the psychology of its characters and some of their actions remain mysterious by the film's end. But with the attention to detail in costumes and props, there's always a nice feeling of watching candid footage of 1750 England.

The big Frenchman is Black Jack (Jean Franval), called that because no-one can pronounce his real name. His first attempt as a footpad is forestalled by the lad, Tolly (Stephen Hirst), who convinces him to help the occupants of a coach that gets stuck in a puddle instead of robbing them. The grateful occupants reward the pair with money so Black Jack decides to create more opportunity by throwing a big rock in the puddle. 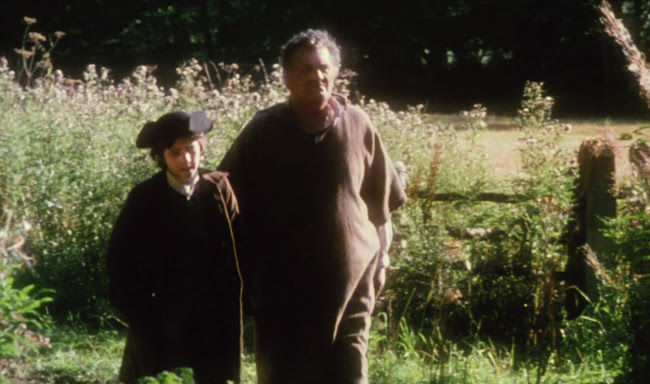 The next coach to run into trouble is bearing a little girl named Belle (Louise Cooper), the most entertaining character in the film. Stricken with madness, her wealthy father has decided to quietly send her off to a madhouse, to where she was en route when Black Jack's rock stopped her. The first thing she says when Tolly catches her running off into the woods is, "I can use the privy!" 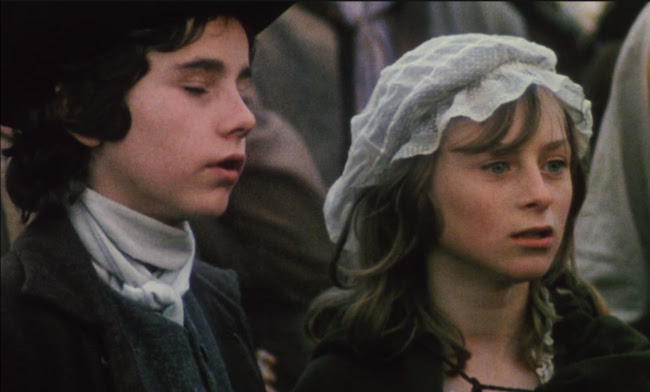 Cooper has a charming, toothy grin and seems committed to telling people about a golden topped tower only she can see. Stephen Hirst as Tolly gives a lifeless performance that sometimes works to convey an emotionally numbed or insecure child. But mostly his monotone, mumbly line readings are good proof of the value in some professional training (it was hard to get a screenshot of him with his eyes open). 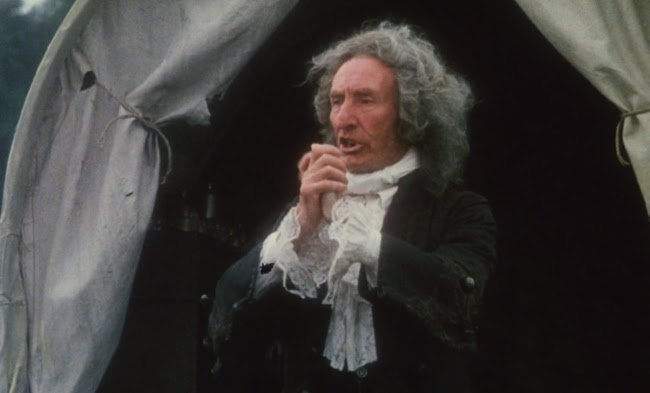 Black Jack recedes into the background somewhat when Tolly and Belle are taken in by a travelling, miracle elixir merchant accompanied by three of the dwarves who'd later appear in Time Bandits--Malcolm Dixon, Mike Edmonds, and David Rappaport. It was pretty easy to imagine Randall, Strutter, and Og themselves were there, still on their quest to find plunder throughout history.

The climax of the film turns on some kind of arbitrary character motives but it was effective enough that I was hoping for the heroes to prevail. Black Jack is available on The Criterion Channel.