What a Painting can Capture 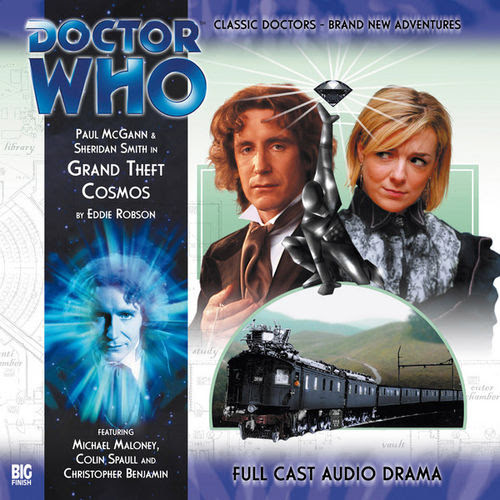 One might guess from the title of "Grand Theft Cosmos", a 2008 Eighth Doctor Doctor Who audio play, that the story involves stealing a universe. And so it does. The Doctor and Lucie, holidaying on a 19th century steamship, run across an art dealer who's gotten his hands on a painting that threatens to rupture time and space. It's a nice, entertaining episode.

Written by Eddie Robson, "Grand Theft Cosmos" features the return of two characters from the first Eighth Doctor (Paul McGann) series, the Headhunter (Katarina Olsson) and Karen (Louise Fullerton). Karen is one of the office workers from the Office parody story "Human Resources", also written by Robson, but Grand Theft Cosmos is much better, not having to go out of its way to force references to an unrelated TV sitcom. Instead, the two returning characters have paired up to steal valuable and dangerous items throughout history, in this case a black diamond and those terrifying paintings.

The Doctor is at first alarmed to learn one of those paintings is aboard the steam ship but is only partially relieved to discover it's only a decoy. Eventually, the Doctor must confront the artist by travelling to the 17th century. Tardelli, the artist, is played by Christopher Benjamin who normally plays the bumbling Victorian theatre owner, Jago, introduced in The Talons of Wang Chiang before becoming a recurring character in the audios. Here Benjamin shows himself capable of putting on a sinister, villainous performance and I didn't recognise him while I was listening.

There are plenty of amusing moments, especially when Lucie (Sheridan Smith) and Karen bicker politely with each other--the two were basically office buddies in "Human Resources". But the effective drama around Tardelli's paintings gives the story enough atmosphere to prevent the comedy from deflating the tone.