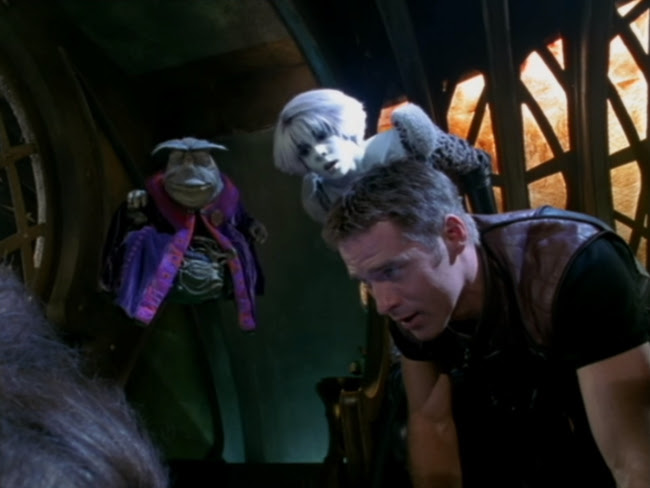 How do you assign relative value to sentient lives? When one person has to die so the others can live, are there any possible objective criteria for choosing? On Farscape, one criterion presents itself as obvious to most of the crew but maybe this is more due to bias than it might seem at first. 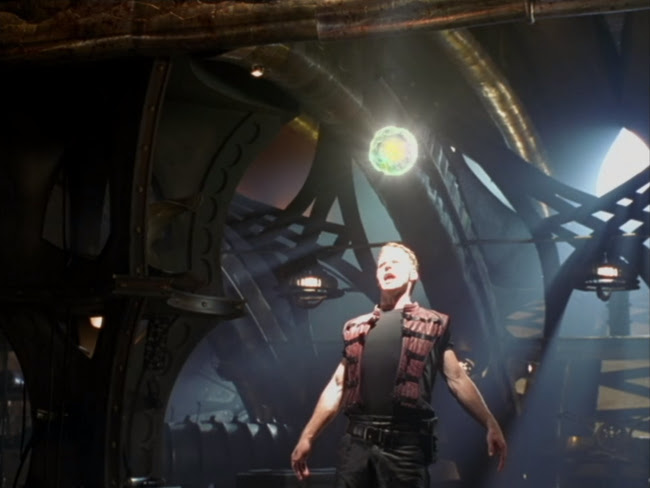 This is a great episode. It demonstrates one of the best things about Science Fiction--it provides a context for thinking about human nature in a way we otherwise wouldn't and so familiar issues take on a new light.

A strange, green blob appears aboard Moya, floats over everyone, one by one, until finding Crichton (Ben Browder). It then grows and absorbs him for a time until he emerges again, but not alone. Two other Crichtons have been created but they're not identical. One resembles a Neanderthal, an early human ancestor, and the other, with an enlarged brain and lack of genitalia, represents the future of humanity. 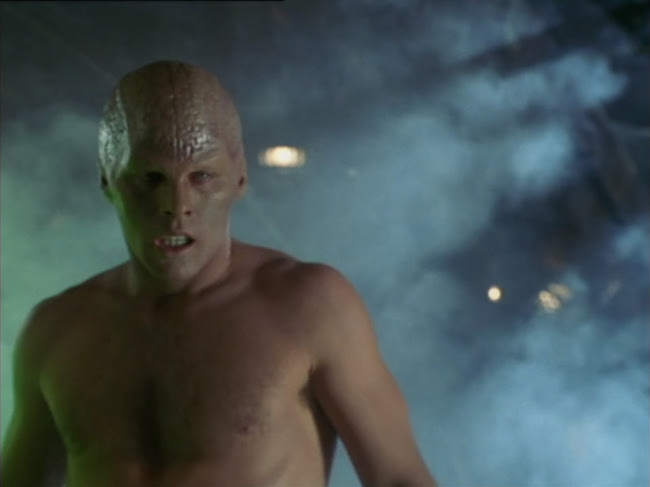 Eventually, the blob communicates with the Crichtons and it turns out one of the three, any one of the three, must go back with the blob or the entire ship and crew will get sucked into another dimension. A decision has to be made and most of the crew, with varying degrees of reluctance, sees Neanderthal Crichton as the obvious candidate. 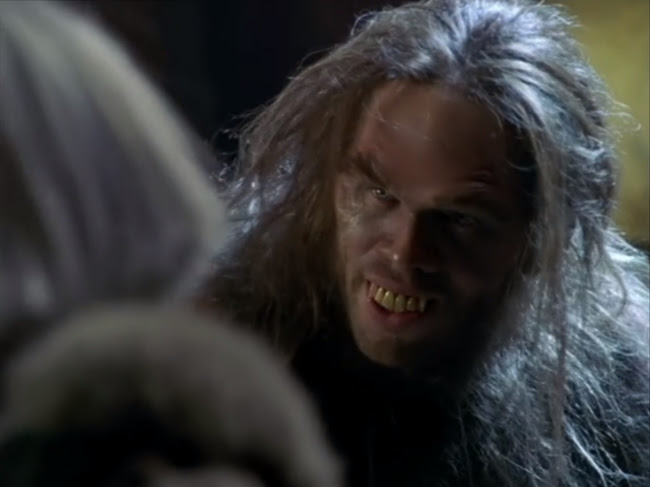 Although mainly about Crichton, I love how this episode uses every other member of Moya's crew. Of course Rygel (Jonathan Hardy) heartlessly endorses tossing in all the Crichtons the blob wants, maybe even more than it wants. Aeryn (Claudia Black), although initially suspicious of Future Crichton, even shares a laugh with him over the idea of the sacrifice being anyone other than Neanderthal Crichton. Aeryn's character development is incidental here but nonetheless you can see her quickness to go with the seemingly pragmatic solution suggests she still has some Peacekeeper in her. 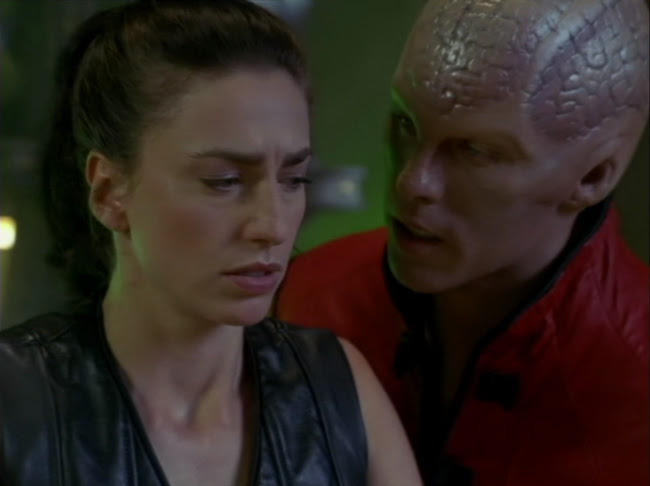 Zhaan (Virginia Hey) criticises Future Crichton's callousness but solemnly accepts the necessity of the Neanderthal's sacrifice. There's an interesting moment where Pilot (Lani Tupu) admits he disagrees with Moya on the subject--Moya won't sacrifice any innocent life to save herself while Pilot sees protecting Moya and the rest of the crew as paramount. D'Argo (Anthony Simcoe) reluctantly takes Original Crichton's side when he wants to find another solution besides giving Neanderthal to the blob but the only one who whole-heartedly wants to save the hairiest Crichton is Chiana (Gigi Edgley). 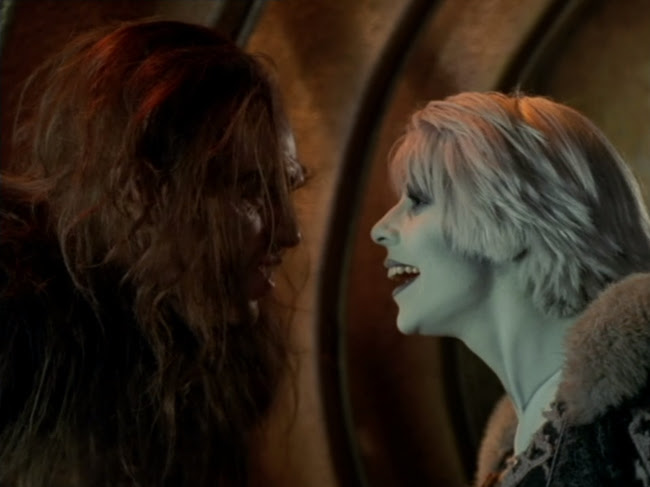 When all other possibilities have been exhausted and Crichton and D'Argo grimly approach the cell where Neanderthal Crichton is being held, they find only a grinning Chiana. Why shouldn't the sacrifice be the big brain Crichton, she asks. Why is his greater intelligence prized higher than Neanderthal's qualities--his warmth and sensitivity, she says, were the things she always liked about Crichton.

Although Chiana and D'Argo have more or less been a couple for a few episodes now, there are still manifestations of her sexual chemistry with Crichton and here it's key. Chiana, who's portrayed as the most sexual of anyone aboard, would naturally prefer the Crichton with genitalia over the one lacking said equipment. The implication here is that sexuality is primitive, that in the progress of evolution it will eventually be left behind. Future Crichton repeatedly says how he's able to arrive at better solutions quicker and maybe that's easier to do without the distraction of being physically attracted to people around him to no rational purpose. But without that, his primary motive seems only to be continual, unending progress. He points out, probably correctly, that there are likely many more things he can do for Moya and her crew after this incident is resolved. 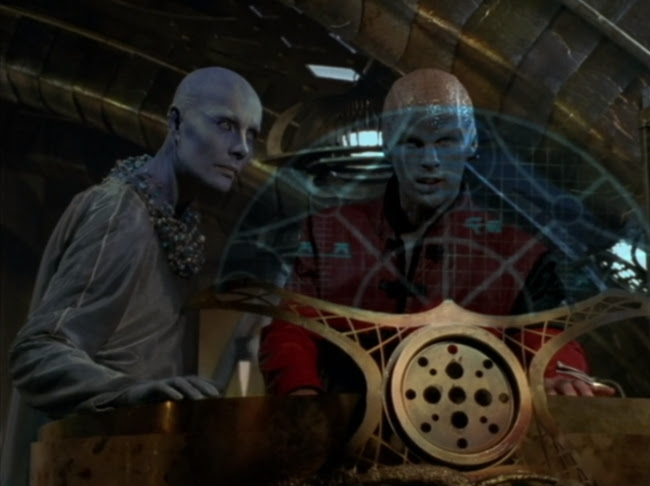 But is making something newer and better, improving technology and even quality of life, is progress really what life's all about? That assumes we know what is better. You could say you can only see the answer clearly if you don't have genitals, or you could say your priorities are completely wrong if you don't have genitals. What's the point of progress if people become colder and more divided? 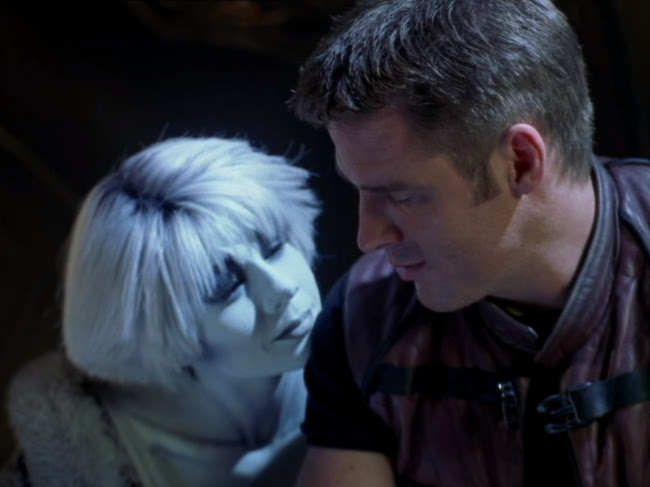 Another thing that has set Chiana apart from the rest of the crew from the beginning is that she's not an unwilling exile from her people. She and her brother chose to leave. The climax of the episode brings in the idea of belonging and hinges on Neanderthal's instinct about whether or not he belongs there. Everyone aboard, aside from Chiana, has longed for this elusively defined sense of "belonging" so maybe it makes sense she's the only one who disregards it. Usually that means she's ready to go off on her own, as in "Taking the Stone". Ironically, in this case, it means she's the one trying to keep everyone together.

Episode 1: Mind the Baby
Episode 2: Vitas Mortis
Episode 3: Taking the Stone
Episode 4: Crackers Don't Matter
Episode 5: Picture If You Will
Episode 6: The Way We Weren't
Episode 7: Home on the Remains
Episode 8: Dream a Little Dream
Episode 9: Out of Their Minds