What Happens Aboard Talyn 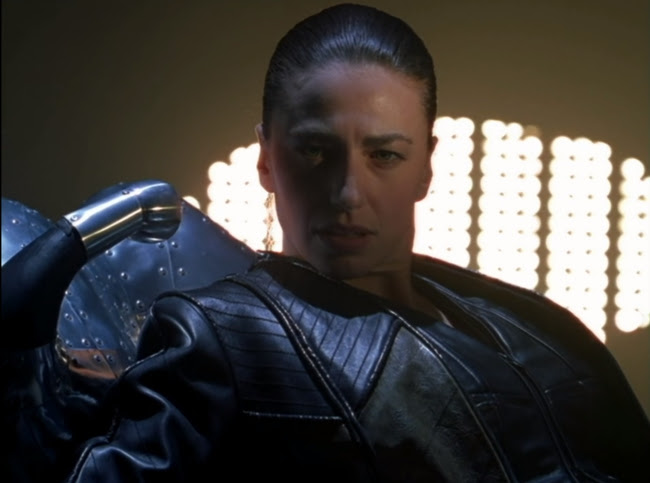 Even in a distant part of the galaxy, stories don't always add up. Members of Moya's crew find themselves interrogated separately in Farscape's visually impressive version of Rashomon. 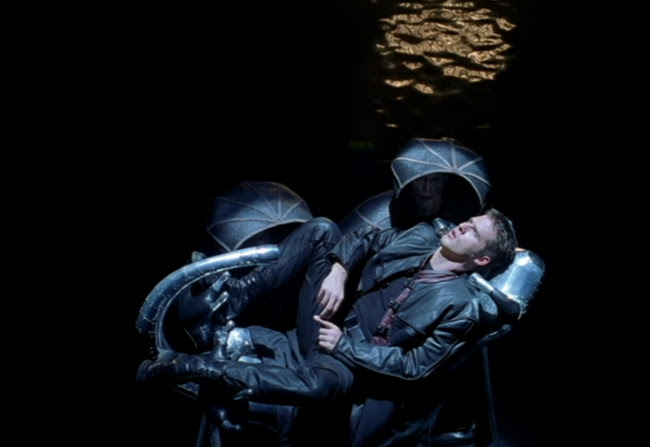 Although the large sets cloaked in almost total darkness suggest a low budget for this episode, director Tony Tilse and cinematographer Russell Bacon create such nice visuals through the use of a reflective chair, other metallic surfaces, and projections that many shots from this episode would later be recut for the revamped season three intro. Though even for shots on Moya, where the lighting is the same as it usually is, they come up with some nice compositions, like this lovely upside down shot of a bored and frustrated Chiana (Gigi Edgley). 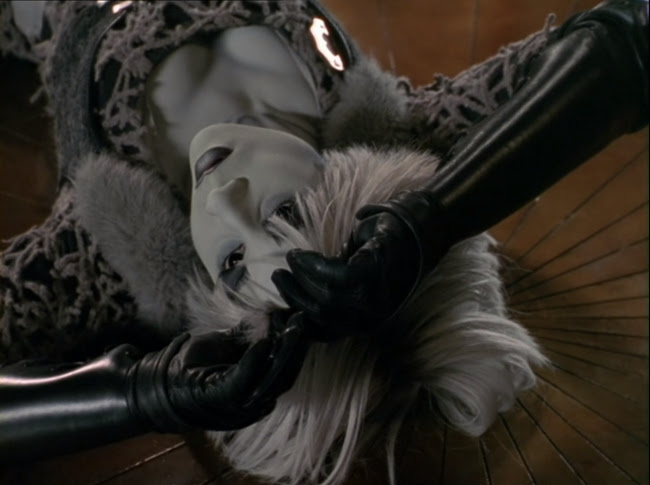 Chiana and Rygel (Jonathan Hardy) are the ones stuck back on the ship and their scenes together are brief but nice little expansions on their friendship. As they joke about Crais (Lani Tupu) they come off a bit like Statler and Waldorf. 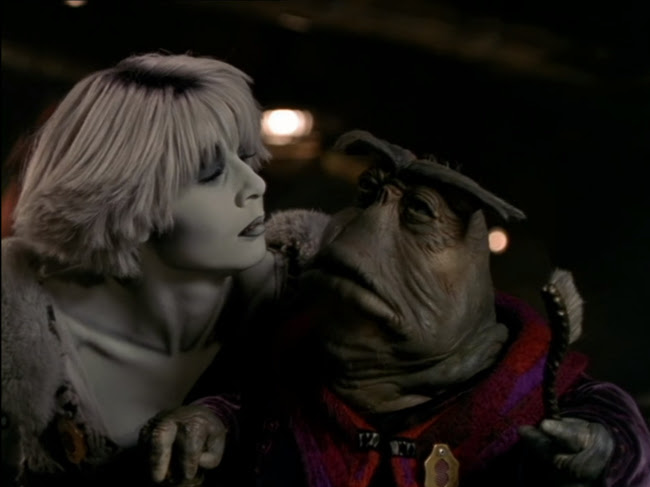 It's Crais over on Talyn everyone else has gone to see when the trouble starts. An argument about disarming Talyn is interrupted by the sudden arrival of a fast moving craft identified as belonging to a race called the Plokavians. Talyn fires on the newcomers, instantly destroying them, and the Moya crew attempt to return in a transport pod when they're captured by more Plokavian ships that've entered the area. Crichton (Ben Browder) awakens to find himself on a platform suspended in darkness. With him are Zhaan (Virginia Hey), D'Argo (Anthony Simcoe), and Stark (Paul Goddard). 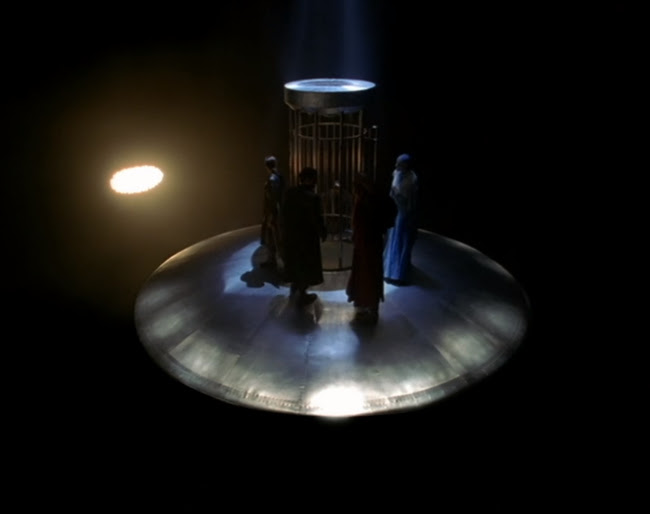 Aeryn (Claudia Black), we soon learn, is being interrogated in a dark room with ankle deep water by hooded beings on crutches. She's been put in something that looks like a sadistic alien gynaecological examination chair and, one by one, everyone's interrogated here and we see five different versions of the same event. 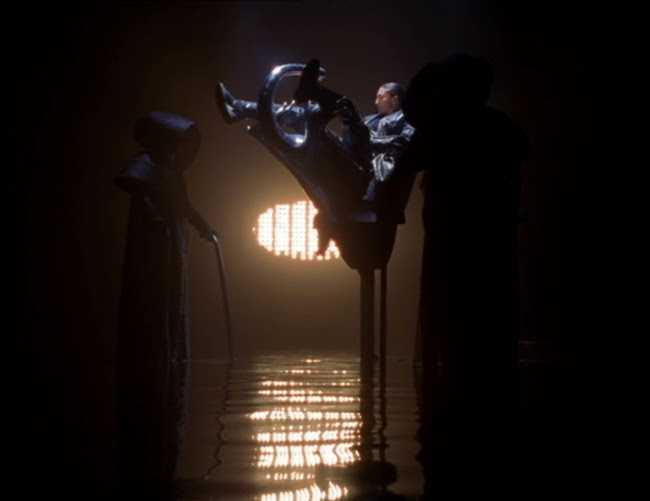 The Rashomon Effect has entered legal and critical terminology to refer to this phenomenon (Notably, the film precedes the emergence of Deconstructionism, so anyone who claims Deconstructionism invented the idea of analysing texts and events from alternate perspectives doesn't know what they're talking about). Rashomon is about a rape and murder and the interrogation of the three people involved in the crimes. Each person presents a different but similar story, the primary difference being that each speaker claims responsibility for the murder. A fourth story is presented, that of a woodcutter who turns out to have witnessed the events from hiding. Some have insisted the woodcutter's story is another piece of unreliable evidence, but I've always thought it was more interesting taken as at least mostly authentic because it pretty clearly explains why each participant would've preferred authorities believed they were guilty of the crime. 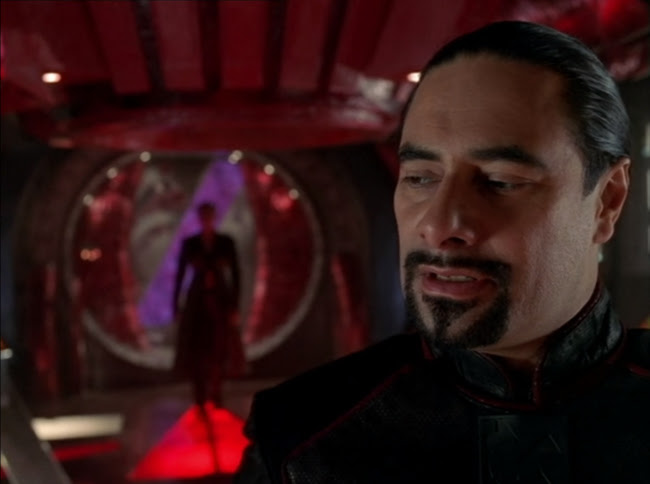 Anyway, on Farscape, mostly the witnesses want to put blame on Talyn malfunctioning since Crais had temporarily severed his mental link to the living ship as an act of faith for the meeting (one that ends up being a lie according to all accounts). This is until Stark decides to blame Crais--he says he's the only one willing to do so because everyone else wants to protect Talyn.

The story ends up being mainly about Stark who might bear some guilt himself, which would have been an act of revenge against the Plokavians for their role in enslaving Stark's people, the Baniks. We learn a bit more about them in this episode, including Stark's strange psychic ability/vulnerability he keeps hidden behind his mask, most of the time. This will come into play later but unfortunately this is the only episode to feature the Plokavians, who are an interesting foil for this kind of plot.

Specialising in developing and trading weaponry, they also happen to have very simple ideas of truth and are confounded by the idea that witnesses might give conflicting testimony even if they aren't lying. It makes sense that a people with such a simple idea of justice would feel comfortable with the levels of death and destruction they apparently are responsible for. I love their disgusting, rotting faces when they're finally revealed, too. I won't post a screenshot in case you want the gratifying nausea of being surprised by the visual when watching the episode yourself.