Discrepancies of Size and Flavour

Snow the cat also took shelter from the rain on the back porch last night--every time I looked outside it seemed there was a different cat. I went outside to see Snow and the poor guy was very cold to the touch. He's gotten a lot bigger than he was when I saw him last. His fur's not quite pure white, it's slightly browned on the edges and he looks a little like a roasted marshmallow. Last night, I could swear he smelled slightly like a roasted marshmallow, too.

I was too tired for much of anything last night, but I knew better than to go to bed early which, from past experience, I know would only result in a couple hours sleep before hours of sleeplessness until I fell asleep three or four hours later than I usually do, and nothing gets solved. So I read more War and Peace, played a lot of Jedi Academy, and fiddled with the most expensive present I received for Christmas, a digital camera. I'm not yet satisfied with my level of competence with the thing, but here are a couple of the practice shots I took last night; 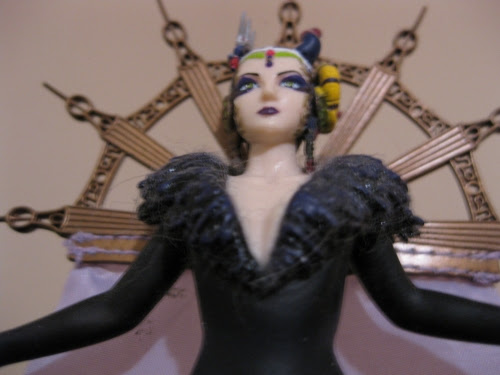 This is my Edea action figure from Final Fantasy VIII. I really love the camera's ability to focus on such a close object--the figure's only around six inches high. 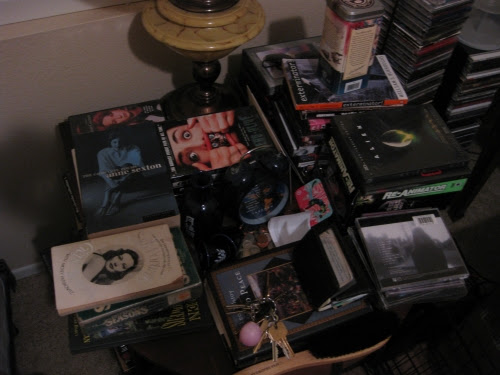 A candid shot of my bedside table, which obviously I have to use for storage. I haven't finished reading that distinctly 1970s looking Gene Tierney autobiography yet--War and Peace has been monopolising my scarce reading time. 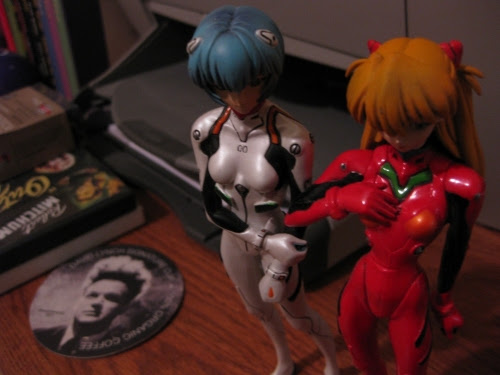 My Rei Ayanami and Asuka Langley Soryu figures with my Eraserhead coaster in the background. 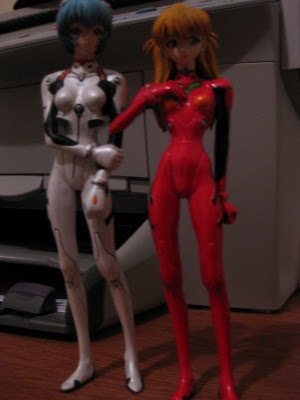 Neither of the figures usually stands on her own, so I guess they really wanted their picture taken. Actually, I somehow managed to rig them so they're supporting each other's weights via Asuka's elbow. They each came with alternate heads and arms that can be swapped.

I'm running behind, so I'd better end this now. Remember, new Venia's Travels to-day.
Posted by Setsuled at 7:44 PM
Email ThisBlogThis!Share to TwitterShare to FacebookShare to Pinterest