I bought my very own copy of The Dark Knight last night, just the regular widescreen edition, nothing fancy. But it did come with "The Dark Knight Catalogue", presented by the Noble Collection. I opened it up and--no exaggeration--I laughed for what must have been a full three minutes at this; 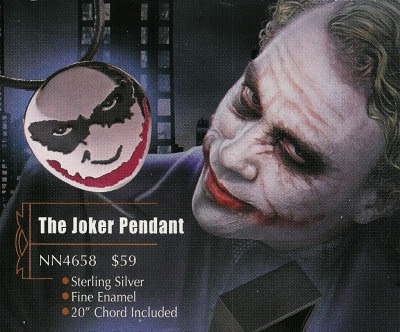 Who wouldn't pay sixty dollars for a pog they can hang around their neck? And who can resist buying it after seeing that elegantly soft portrait in the background, a single curl of green lock on the right frames that haloed acrylic countenance. Movie makeup and a masterful performance could not fully conceal that great heart that loved Thomas Kinkade and doggy sweaters as much as you do. And this heirloom is rich in loving tradition; many's the time Great Uncle Wally's smoked his pipe in his study as the grandfather clock ticked steadfastly and he drew comfort from one of his gilt framed portraits of The Joker.

I have a button of Robert Smith's face on my car's sun visor that looks almost exactly like that thing. I think it cost me a dollar.

I did watch The Dark Knight last night and I still enjoy it. This time I noticed how carefully they avoided showing the face of Gordon's daughter. I wonder if Nolan's actually toying with the idea of including Batgirl in a future film.

Jim Emerson's bitching about how critic Josh Tyler's bitching about lack of recognition for The Dark Knight from the Golden Globes and critic's awards. I have to say, though, I kind of agree with Tyler. If a movie's enormously popular and the vast majority of reviews are positive, what more objective criteria could there be to call a movie great? The failure of the Golden Globes to even list it among contenders for best picture does underline the irrelevancy of that awards programme.
Posted by Setsuled at 6:31 PM
Email ThisBlogThis!Share to TwitterShare to FacebookShare to Pinterest