If James Cagney were a woman, he'd be Katee Sackhoff. 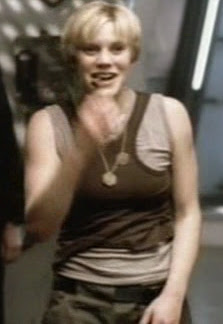 Can't you just see her shoving a grapefruit into someone's face in a fit of rage? You might remember me complaining last month about skinny little women being cast as soldiers. Battlestar Galactica did it right--Sackhoff punches a guy in the miniseries and I can believe it hurts. And she carries herself like someone who likes to mix it up. All that, and she's charming and sexy, too. See? It's possible. How many girls like this are short changed so Natalie Portmans can feebly pretend like they're beating people up?

I'm extremely late to the party, but I finally got around to watching the new Battlestar Galactica last night. I mainly liked it. There's an opening scene that's extremely silly, and one or two others that don't quite make sense (none of the kids squawked about getting separated from their parents?), but otherwise there was a wonderful focus on characters and an unreserved tact with storytelling. Commander Adama's estranged relationship with his son seemed somewhat cliché to me, but I guess these things do happen in real life.

A couple weeks ago, I listened to Carly Simon and Ben Taylor, the son she had with James Taylor, being interviewed by Howard Stern. Stern got them talking about Simon's relationship with her ex-husband, James Taylor, and both she and Ben admitted that Stern was the first interviewer to get them to talk very extensively about how James refuses to speak to Carly and, to a large extent, refuses to acknowledge her existence, going so far as to cancel appearances at events where they both might be scheduled to appear.

Stern asked Ben if he'd ever tried to talk to his father about maybe having some kind of speaking relationship with Carly, to which Ben replied that he knew his mother "would never ask him to do that." Which is a dodge, of course, because Ben was afraid of admitting that he was too afraid of broaching the subject with his father. When asked if anyone ever tried to talk to James about it, Ben said, "No, because everyone's too intimidated by him."

"But he's a baby!" said Robin Quivers, which I thought was dead accurate as regarded James Taylor's behaviour. Carly said the rift between them had begun when, after she'd learned James had cheated on her while on tour, she'd cheated. Ben said the one time he'd gotten his father to talk about Carly, he'd told him that thinking about her took him to a "dark place". I bet he'd cheated on Carly on a spur of some idealistic hedonism, shutting off total self-awareness of the consequences of his actions, and that Carly's retaliation had been simultaneously hurtful while putting a strain on that lid he'd put on a part of himself. It is, indeed, intensely immature behaviour because it subscribes to a philosophy that denies personal growth to avoid unflattering self-reflection.

I've always been of the opinion that an artist must always be brutally honest with his or her self as he or she is capable of being. I can't really prove this brutal honesty is necessary, but it's something I've long believed, which is why it always frustrates me when I see other people avoiding such honesty. Which means a lot of people frustrate me because a lot of people seem to see self-deception as necessary for survival.

When I worked in retail a couple years ago, there was a girl I liked with whom I worked. I asked her out to coffee once, she said yes, then rescheduled. Then she rescheduled again, and again, until it seemed going out to coffee was going to be infinitely rescheduled and I started to think this was her way of turning me down. A mutual friend would later tell me about her drug addiction, and I came to know what a very frightened person she was. We worked together for years, and while she claimed to have had sex with Ron Jeremy and other people had witnessed her publicly exhibiting some very dangerous and immodest behaviour, she was still too afraid to tell a guy she didn't want to have coffee with him. I guess those of you with experience with drug addicts know these two things actually do add up.

Mainly I think what I learned from that experience (though it's a lesson I sometimes blatantly ignore out of frustration) is that you can't push these people. They just get more frightened, and there's no bottom to the hole they can dig for themselves. You can only hope they'll find courage on their own some day.
Posted by Setsuled at 9:00 PM
Email ThisBlogThis!Share to TwitterShare to FacebookShare to Pinterest