I'm becoming a hopeless shutterbug. Hopefully not an obnoxious one. Here's Snow, the neighbours' cat, very early this morning. Cameo by my very dry hands;

He really wanted to go inside the house. I felt bad leaving him out there, especially as his big blue eyes watched me imploringly through the door.

This was just before I went to bed, and it's a testament for my weakness for cats that I spent time with him after getting barely any sleep yesterday.

Since I knew I wasn't going to get any quality work done on the comic, I went to Tim's early in the evening before coming back here and watching my new copy of Vertigo. I know, it's pathetic; I already had a copy that I've watched fifty billion times. But finally the movie's been put out by people who know a thing or two about DVDs--it's anamorphic widescreen now instead of just a letterboxed image in a square, the sound's mixed properly so the dialogue's not just barely audible under music and sound effects blasting, the colours are crisper, and the resolution is almost twice that of the old release.

While I watched, I drank a sample bottle of Le Tourment Vert, a brand of absinthe I'd never heard of, but the sample bottles were only eight dollars by the register and so pretty; 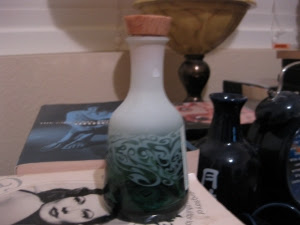 It's so amazing to me to think genuine absinthe is now being sold on check-stands. Though this wasn't the best absinthe I've had. First of all, it's only 100 proof, very weak for absinthe. I sipped a bit of it straight and it tasted a bit like a gummy worm. I mixed the rest with water and it tasted a little like mouth wash. But I enjoyed it more as I kept drinking, and absinthe seems the perfect beverage for Vertigo.

Switching to full screen mode, I bet it's not such a bad way to watch it.
Posted by Setsuled at 7:23 PM
Email ThisBlogThis!Share to TwitterShare to FacebookShare to Pinterest