The Girl Lost in a Chorus of Dreams

I've been watching the 1951 Disney Alice in Wonderland while eating dinner over the last couple nights, and feeling a lot kinder towards it than I did the last time I watched it. Usually I'm too caught up in how short-changed Alice is as a character, but now I've been marvelling at how beautiful the design is and how keen the animation is.

If I can ever make something half this beautiful, I can die happy;

I can't believe how cool Disney is about their stuff being on YouTube. They're usually pretty uptight about things.

Anyway, I still think animation is the best medium for an adaptation of the Alice books to cinema. But this one sadly lost cohesion in a big way, and here's why; 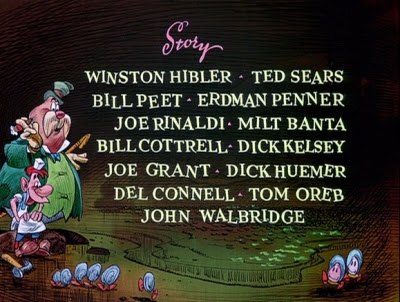 That's not even counting the people who did the storyboards or the songwriters--and this movie has more songs than any other Disney movie. And they're generally good songs; I particularly like "Very Good Advice", which does the most to humanise Alice, second only to her animation. The animation of Alice is filled with marvellous character, in such quick tiny movements. I love the graceful, rapid movements of her hands while talking to the Caterpillar that come off as completely unselfconscious and reflective of a personality yet also ethereal and balletic. And I adore instantaneous bits like when she places the mushroom pieces in her pockets and snaps her hands back to indicate pleasure she feels at the power granted to her by the items.

But these moments are fleeting as Alice quickly gets lost in the shuffle of slapstick routines which are brilliant in themselves but which serve to derail the story as a whole. Alice becomes merely a foil in the mad tea party to Ward Kimball's, Ed Wynn's, and Jerry Colonna's brilliant comic timing and comic logic. The March Hare snatching the cup of tea back from Alice when she admits she doesn't know what an Unbirthday is is like a grain of sand in a whole sandbox of brilliant comedic moments.

There are so many good ideas flying around it's really too bad they never come together. I'm not alone in my opinion, of course, as Wikipedia says Walt Disney himself, "surmised that the film failed because Alice lacked 'heart' and was a difficult character for audiences to get behind and root for." When she starts crying at the beginning of the movie, we just don't know why. Too much of her development was tossed out for the other things.

The Wikipedia entry goes on to quote animator Ward Kimball who said, "it suffered from too many cooks - directors. Here was a case of five directors each trying to top the other guy and make his sequence the biggest and craziest in the show. This had a self-canceling effect on the final product."

But there are so many great individual elements to enjoy.