Last night I dreamt I was walking across the Coronado Bridge, which is a big bridge connecting downtown San Diego with Coronado, where the Hotel del Coronado is located, one of the exterior shooting locations for Some Like it Hot. The bridge was much thinner in my dream than it actually is and there were no walls or railings on the sides. A taxi ahead of me was trying to back up and turn around, but the driver misjudged the distance between the rear of his car and the edge of the bridge and the vehicle tumbled into the water creating a massive white splash. The driver and four passengers were killed.

In my dream, I knew I was going to blog about this terrible accident, so I started imagining how I'd describe it. Somehow this led to me in a bathtub with a bunch of plastic toy cars in a row across my chest. I dipped under the water and all the cars floated away while I went, "Aaaah! Bchhssssh! 'Help me, help me!'"

Yes, I am a master storyteller.

Over the past couple nights, I watched the first Terminator movie for the first time since high school. I'm trying to keep myself to as strict a schedule as possible, so I stop working at 5am and eat either a bowl of cous cous or jam on toast. I figure this is conducive for optimum efficiency. Though last night I actually didn't stop colouring until 5:15.

Anyway, I watched half of Terminator on what you would call Wednesday morning and the other half on what you would call Thursday morning. It's truly amazing how much better Terminator 2 is. The dialogue is astonishingly bad at times in the first movie, and there are really silly problems with story logic--when it becomes clear that someone is killing off women named Sarah Connor, the police determine they can't help the final Sarah Connor so long as she doesn't answer the phone at her apartment. And in the so bad it's good category, there's this guy; 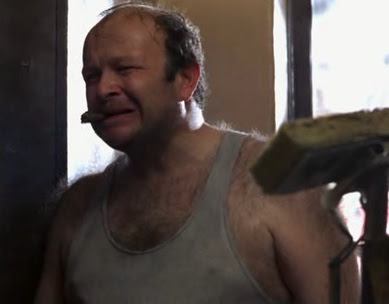 Apparently the janitor in the apartment building where the Terminator is staying. I'd say he looks like Karl from Aqua Teen Hunger Force except Karl's not quite so much of a caricature. I get the feeling this is what James Cameron thought the common man looked like, and it is perhaps here that we can see the director of Titanic.

But I still mainly like the movie. I can see why Harlan Ellison was so pissed off by Cameron's tribute to two of his episodes of The Outer Limits (which apparently inspired Terminator). It must have seemed to Ellison like Cameron took bad dialogue and a rather awkward love scene and coasted them on Ellison's good ideas, but I still love Michael Biehn and Linda Hamilton, and the construction of the action sequences. I've been trying to get enthusiastic about action sequences again. I remember I always used to look forward to them when writing Boschen and Nesuko, but with Venia's Travels I'm so much more into the dialogue bits.

I finished the script for Chapter 16 last night and I'm really looking forward to drawing it.
Posted by Setsuled at 8:34 PM
Email ThisBlogThis!Share to TwitterShare to FacebookShare to Pinterest