I made a frustrated attempt at grocery shopping a couple nights ago at 2am. The Ralph's stores, which I'd relied on to be open 24 hours, are all changing to close at 1am. My grandmother suggested it had something to do with the company not being able to afford the overhead now.

I suppose I can see the advantage of a diurnal schedule. I just can't seem to get to sleep. I tried really hard to get to sleep at 6am last night, but I didn't accomplish slumber until 7am. I just keep pushing it further and further. I feel like Superman reversing the Earth's rotation. Speaking of somewhat dodgy time travel logic, I rather enjoyed last night's episode of Terminator: The Sarah Connor Chronicles. It was written by Toni Graphia, the same woman who'd written the great "Allison from Palmdale" episode earlier this season. Clearly, Graphia likes writing about Cameron. Graphia's Wikipedia profile, aside from noting that she's a television writer and producer, says of her only; "She is openly lesbian." Excellent.

I'd been thinking how much I'd like to see more of a focus on Cameron, and here this episode speedily delivered. The shows sucked me into the old, seductive dance with a robot, "Does she have emotions or doesn't she?" that I'd first tangoed with Brent Spiner. The third season episode of TNG featuring Data's daughter Lal (which I watched again a couple of days ago) may've marked my transition into the android receptive puberty our future overlord nanites had seeded me with in utero.

As is the case for every television series anywhere from any time, Terminator: The Sarah Connor Chronicles is sexier than Star Trek: The Next Generation. So this may mark my transition into later robot receptive adolescence. Still, I wonder how long the show can tease me before I'll get bored from the lack of a substantial commitment to a character path for Cameron. For now, I'll enjoy the age old Mona Lisa mystery of a pretty android face which may or may not be expressing genuine emotional responses.

As for other aspects of the episode, yes, there were problems with anachronisms (a radio newsman in the 20s wouldn't say "how in God's name"), and the whole episode makes us wonder again why terminators weren't sent back in time for Sarah's ancestors, but I enjoyed it, including the slightly unbelievable climax. I'm even starting to like John Connor now, and I think it's entirely due to the leather jacket he's started wearing. His dull blankness suddenly seems moody and mysterious. The jacket does for him what it did for James Marshall on Twin Peaks.

I suppose I'd better get to the grocery store now . . . 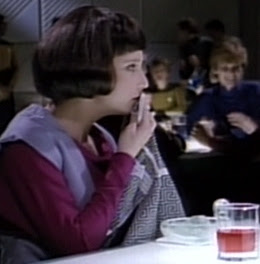 Posted by Setsuled at 8:27 PM
Email ThisBlogThis!Share to TwitterShare to FacebookShare to Pinterest