Last night had a few unexpected distractions. After writing my blog entry, I got back to inking. It gets very hot in my room, so I usually have the ceiling fan on its highest setting when I draw. But the chain, for changing the fan setting, broke off in my hand last night, sticking the ceiling fan on off. This wouldn't only be a problem for drawing, but I knew I'd never be able to get to sleep with the fan off, either. So I had to find some way to make it work again.

I noticed the white metal cylinder above the lamp on the ceiling fan had little gold screw heads, so I decided to try opening it and seeing if there was anything I could work with. Inside was a mess of wires at one junction of which was a small plastic disk, which fell out of the hole the broken chain had been in. The top of the disk was a translucent cap of white plastic, and inside I could see the remains of the chain, looking like there might just be enough to pull out and make a working chain again if I could somehow get the translucent top off. Unfortunately, the top was clamped in fast by a tab on either side.

As I was trying to press the little tabs in with my fingers, I suddenly got a feeling in my left elbow as though I'd struck my funny bone on something. I vaguely thought maybe I was experiencing some kind of blood pressure problem and didn't think much of it. But then I got the same feeling, far more severely, in my right arm and I realised I was electrocuting myself with the exposed wires attached to the disk, despite the fact that the fan was apparently turned off. I flipped off the light switch connected to the ceiling fan and didn't experience the problem again.

I finally pulled the disk off after twisting one of the tabs with some needle nose pliers. Then I busted it open with my dagger at which point its guts popped out, courtesy of a spring coiled within. I never figured out how to fit it together again properly, but I took a little plastic spindle I found inside and stuck it in a square black vagina (I don't know if I'd ever get through tinkering with gadgets if I didn't usually find vaginas on them) on the disk half still connected to the wires, surrounded by four beds of wide, S shaped copper petals, each with its own bare headed wire clamped in it. I used pliers to twist the spindle or penis, if you will, in the vagina a couple times, periodically flipping the light switch until I got the fan on the desired setting. Then I put it all sort of back together. So now the fan has just two settings, off and high, but at least it works. That took an hour.

Shortly afterwards, I decided to have dinner. I got some new, massive potatoes from CostCo that are normally really good, but take around ten minutes to bake in the microwave. After cooking it for ten minutes last night, I cut open my potato to see this; 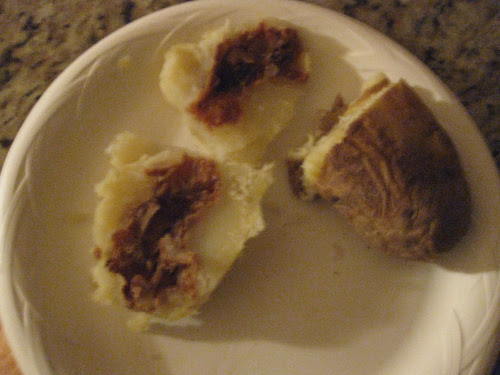 I don't know what was wrong with it, but it smelled terrible, too. When I finally finished making dinner, I watched the final episode in the "Sensorites" Doctor Who serial. 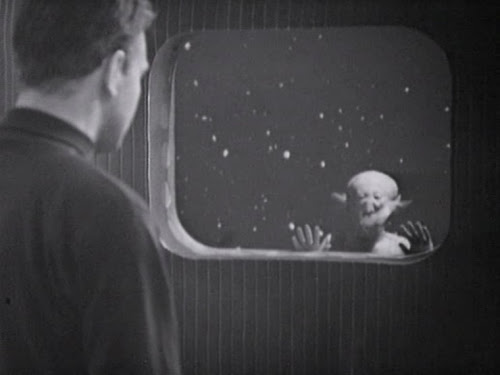 A serial that began with a promisingly creepy episode unfortunately dissolved into total confusion. After the nicely spooky looking Sensorites are revealed to be another relatively ordinary civilisation, a villain, the City Administrator, is established amongst them and some kind of plot about a poisoned water supply. The aqueduct where the water's being poisoned is, as the Doctor observes, conveniently dark, as the Sensorites have very poor vision in the dark, and there's a monster located in the maze of pipes which shreds the Doctor's coat. There are two water supplies, the city's regular supply and a "crystal water", which is exclusively consumed by the upper class and is found to be uncontaminated. So with the City Administrator trying to consolidate power for himself, evident sabotage in the lower caste's water supply, and the purity of the upper caste's supply, it seemed pretty clear we were heading towards a reveal of the City Administrator poisoning the people as part of some megalomaniacal scheme.

Anyway, it is nice to see the Doctor taking a more prominent position on the show. Even though William Hartnell constantly flubs his lines, he's easily the most interesting character of the four protagonists. I'm not exactly sure why, but it could be his tendency to seem inappropriately amused and triumphant at times.

Here's my current character in Fallout 3; 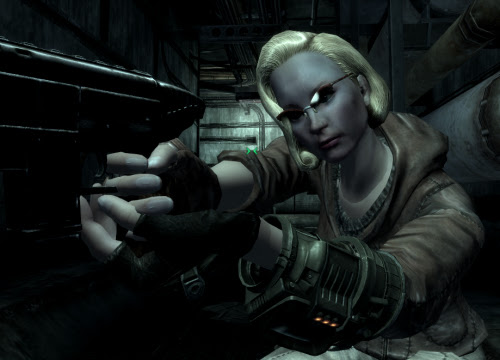 She didn't end up looking much like Peggy Cummins, more like Eva Marie Saint, maybe, which I guess is appropriate since I'm using music from North by Northwest. But I've been playing her like Cummins' character in Gun Crazy, making her a bit selfish in dialogue, maxing out the Small Guns skill quickly and getting the Thief and Gunslinger perks. I've gotten her so she kills most people she comes across with one shot to the head with a pistol, from a good distance.
Posted by Setsuled at 10:00 PM
Email ThisBlogThis!Share to TwitterShare to FacebookShare to Pinterest