Eli Roth just tweeted a picture of Sarah Jessica Parker next to the Cloverfield monster with the caption, "So excited for the Cloverfield sequel!" I just realised the monster looks sort of like Chuck E. Cheese. 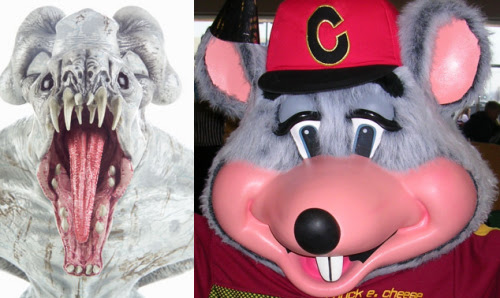 Speaking of mildly campy fun with the apocalypse, I played a lot of Fallout 3 yesterday. I've discovered one of the great things about the game is its customisable soundtrack. Oblivion had sort of the same thing, where you could simply put mp3s of your choice into the game's music folders, but Fallout 3 has a few more categories; Battle, Explore (for when you're roaming outdoors), Dungeon, and Public (for towns) just like Oblivion but with the addition of Base, Tension, and Endgame. I put in a bunch of tracks from Aliens, North by Northwest, The Good, the Bad, and the Ugly and, since the default soundtrack sounds like knock off Brad Fiedel anyway, a bunch of tracks from the Terminator 2 soundtrack. There's also in-game radio stations--by default you get one where Malcolm McDowell, as the new, self proclaimed president of the United States, feeds you propaganda. I think he's supposed be using an American accent, but it's hard to tell because he completely fails. Not that it matters much to me, since it's still Malcolm McDowell.

The other radio stations play a lot of music from the 30s, 40s, and 50s, keeping with the game's alternate history where I think the nuclear war happened in the 50s. A mod lets you create your own radio station so I added a bunch of Juliette Greco, Josephine Baker, Marlene Dietrich, and Marilyn Monroe singing "Diamonds are a Girl's Best Friend", which comes off as somehow ironic when you're blasting the heads off super mutants.

To-day I've mostly been drawing, the soundtrack for which has been Annie Lennox and Tool. Gods, I love drawing action sequences.
Posted by Setsuled at 7:12 PM
Email ThisBlogThis!Share to TwitterShare to FacebookShare to Pinterest