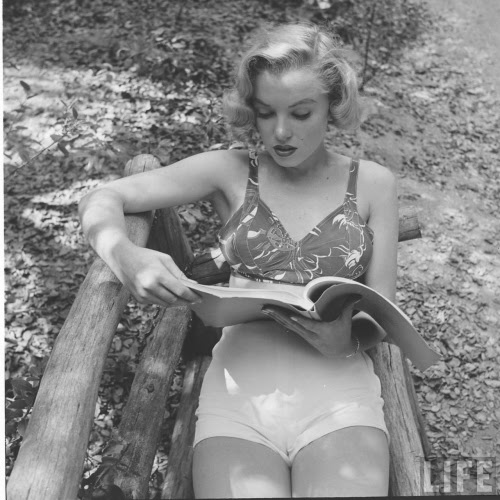 Over at AICN, there's a post by a guy named Beaks about some upcoming Marilyn Monroe biopics. Beaks talks about how he feels the curvy Marilyn Monroe body type isn't accepted in Hollywood anymore with the exceptions, he claims, of Christina Hendricks and Scarlett Johansson. He seems to subscribe to the erroneous, somewhat popular belief that a heavier look for women was more "in" in the 50s.

Look at the picture I posted up there. Take your eyes off Marilyn Monroe's camel toe (what an innocent time) for a moment and look at her arm. Does that look heavy to you? And consider for a moment other 50s stars like Audrey Hepburn and Grace Kelly.

The difference to-day is in how the body is dressed, most importantly in the waistline, which has gotten considerably lower. This has the effect not only of emphasising lower regions of the body, but also of giving the body a generally longer quality. If you think of the waistline as the bottom of a segment, one realises as it's lowered, the upper segment isn't as wide anymore in proportion to its height. Marilyn Monroe was 5' 5 1/2", but unless she's standing next to someone, you wouldn't know. Consequently, you end up with a wider look compared to the women in movies and magazines to-day.

I hope I've provided some illumination for people this evening. 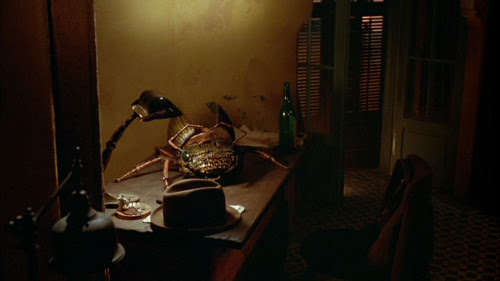 The dystopian 50s aesthetic of Fallout 3 put me in the mood to watch David Cronenberg's adaptation of Naked Lunch last night. More and more these days, I wish Cronenberg would go back to making weird movies. Sure, his gangster films are a cut above average, but his ability to tell earnest stories about the completely fucking weird is too precious a talent.

The movie's really more about William S. Burroughs than it is an adaptation of the book, and it's a fascinating and very effective portrait of someone tormented by feeling--the various hallucinations and delusions come off as automatic attempts by the mind to ward off feeling, as rationally he knows the only feeling he has any right to is pain. It would seem to be the inevitable result of killing someone you love by accident and being someone who doesn't believe in accidents. So "exterminate all rational thought" is the film's tagline.

I think Cronenberg believed that Burroughs wasn't really attracted to men, that homosexuality was a "cover", a way of finding a life where the lack of feeling was natural. This is demonstrated to me in the scene where he callously allows Kiki to fall into the clutches of Julian Sands' character and the strange centipede monstrosity the other two men appear to become when he sees them having sex is a reflection of his own realisation of the monster he's become. But all sex seems to take on insect and centipede qualities, as evidenced by this bizarre puppet that shows up when he begins to make out with the second Joan. 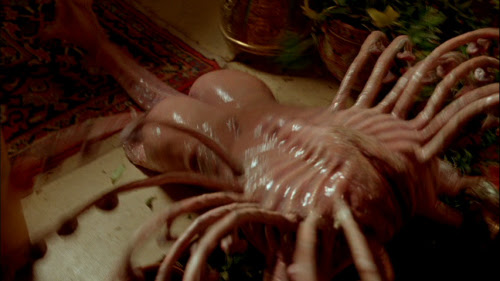 Intimacy and compassion have become irredeemably strange and dangerous, which is why it's sort of admirable that throughout the movie he's clearly fighting to keep his sensitivity. It's been way too long since I've read the book . . . 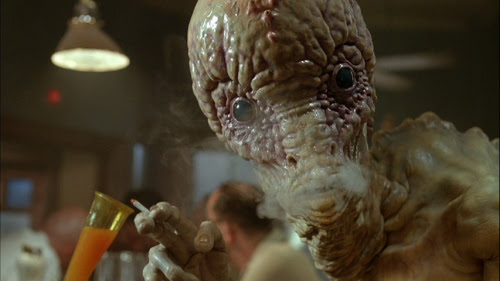 Posted by Setsuled at 10:17 PM
Email ThisBlogThis!Share to TwitterShare to FacebookShare to Pinterest