I woke up to this to-day; 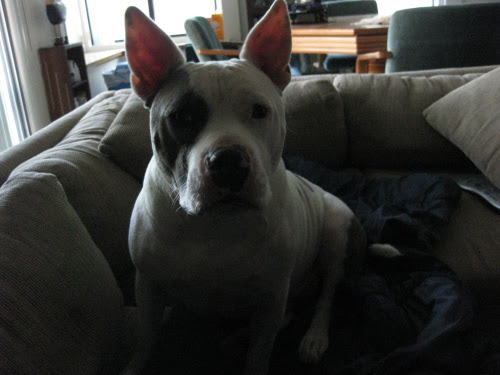 That was just one of several times I woke up to-day. The main reason I'm house sitting for Tim's family is this pit-bull, Kaydyn, is afraid of being alone in the house at night. He's a big, tight, perfect machine of muscle with jaws it's not hard to imagine snapping human bones to fragments, but he's one of the sweetest guys in the world. He always has this look in his eyes, as though he's sorry for crimes he's not committed and never will, like Catholic Guilt.

At around 5:30 in the morning, he decided he was going to sleep on top of me, and the mass of furry muscle crushing my ribcage actually wasn't so bad compared to how warm he was in the already pretty warm room. I tried sleeping for about an hour, then gave up and watched the fifth episode (or sixth episode, depending how you count) of Twin Peaks. Apparently I was on a Russ Tamblyn kick, as I'd watched the future Doctor Jacobi in Gun Crazy the night before. 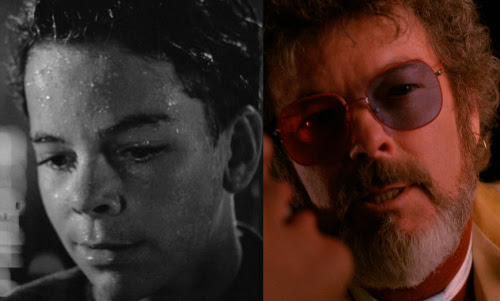 Possibly one of the worst episodes of Twin Peaks. Directed by Lesli Linka Glatter, it not only features Shelly's and Norma's fabulous makeovers; 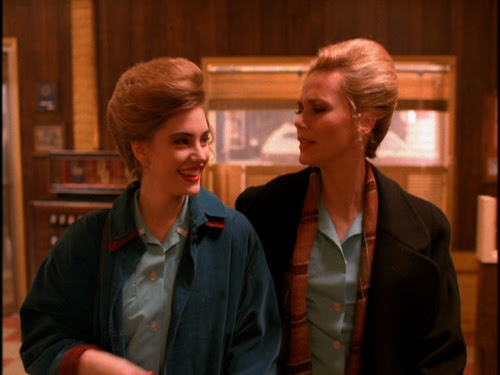 It also features a few really stiff actor blockings, most noticeably this one, used twice, where four actors hit quickly these precise marks for the camera; 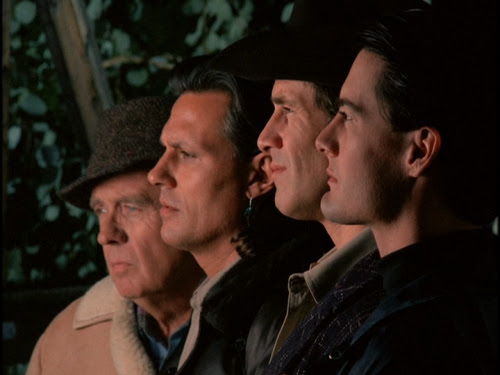 I expect to hear The Three Stooges saying, "Hello, hello, hello . . . Hello." I guess the problem was that the other directors working on Twin Peaks felt they had to keep up with David Lynch's natural talent for strangeness and tripped over themselves in the process. Despite this terrible episode, Glatter has gone on to direct episodes of Mad Men, among other shows.

I took the time alone at Tim's house last night as being meant for movie watching somehow, so I watched Singin' in the Rain as well as Gun Crazy. It's pretty common wisdom nowadays that Singin' in the Rain is the greatest musical ever made, and I used to agree, but after watching it last night for the first time in a long time, I think I might actually consider Meet Me in St. Louis and Swing Time to be superior.

One of the great things about Singin' in the Rain is how naturally in flows--the characters trade realistic minor ego bruisings, unlike other musicals from the period like The Band Wagon, which I find I almost unwatchable due to it's portrayal of Fred Astaire's character as sort of a moron who's not meant to be a moron. There's a tricky line between ridiculous and justice to characters when people launch into songs that only barely seem related to what's going on in the plot, but while The Band Wagon accomplishes its first number by having Astaire get guilelessly caught up in arcade games after some odd, embarrassing self-mockery, Singin' in the Rain hits nutty rather than moronic, particularly with the amazing "Make 'em Laugh", where Donald O'Connor accomplishes for a gag what required wires and cgi in The Matrix. Watching it last night, it really made me reflect on how performers just aren't like that anymore. When Buster Keaton did something amazing, it was a component of a larger piece, a lot of the coolness was in how he passed it off as almost nothing. Now the best physical performers can only seem to do things that are all about themselves, and their work is never as good--I guess the closest correlations I can thing of would be Cirque du Soleil and Michael Flatley.

But I found myself not getting quite as caught up in the characters and story of Singin' in the Rain as I was with Meet Me in St. Louis. Singin' in the Rain feels quicker, more like a collection of music videos. But that's not exactly a negative criticism because it's flawlessly executed. 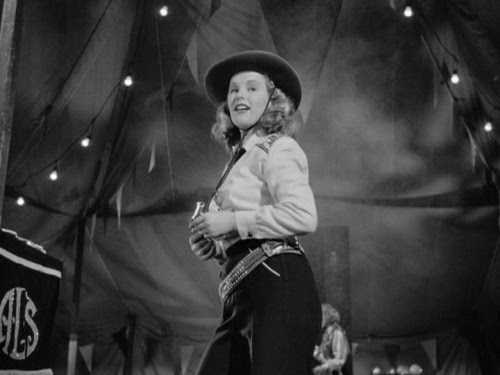 As I said, I also watched Gun Crazy last night, and really enjoyed it. Peggy Cummins I think may have the sexiest voice ever recorded.