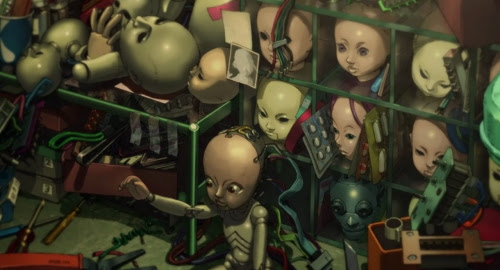 "Well, it's no use your talking about waking him," said Tweedledum, "when you're only one of the things in his dream. You know very well you're not real."

"You won't make yourself a bit realler by crying," Tweedledee remarked: "there's nothing to cry about."

"If I wasn't real," Alice said--half-laughing through her tears, it all seemed so ridiculous--"I shouldn't be able to cry."

"I hope you don't suppose those are real tears?" Tweedledum interrupted in a tone of great contempt.

I really liked the looks of Christopher Nolan's upcoming film, Inception, when I saw its trailer before Iron Man 2, but it strongly reminded me of Paprika, a film Inception will need to work really hard to be anywhere near as good as. I watched Paprika last night for the first time since I saw it in theatre in 2007, and I thought I was noticing a bunch of things about it I hadn't noticed the first time, but now I find I not only did notice all those things, I blogged about them;

There are so many things I could say about it, so many ways I could talk about it. It's a movie about duality; male and female, reality and imagination, free market and altruism, action and complacency . . . and how those dualities relate or coexist or are more connected than we might suspect. Or the ways in which people arbitrarily might connect the sets to suit their own goals or psychological compulsions.

It's a movie that successfully combines the Sci-Fi psychology of Neon Genesis Evangelion with the sort of neo-mythological qualities of Hayao Miyazaki movies. It's about the crisis of individuality being lost in Japan's groupthink oriented society--a theme I'm seeing in increasing prominence in anime. (There's a plot thread that strongly reminded me of Gendo Ikari's Human Instrumentality Project from Evangelion) And Paprika is all this in a package of charming and interesting characters, as well as extraordinary visuals. 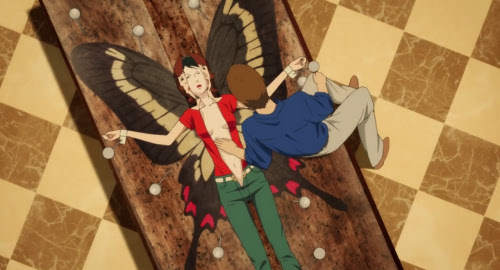 One thing I'm not sure I noticed, or got, the first time, was the scene where Osanai has Paprika pinned like a butterfly and proceeds to tear Dr. Chiba out of Paprika in a manner that very much resembles rape. At first I thought I didn't like the concept of the scene because I didn't think it was exactly right to say that Paprika was secretly Chiba. My impression was more that Paprika was an alter ego in a very literal sense of the word, like another consciousness that happens to use a part of Chiba's mind, like a symbiote. The last portion of the film seems to bear this out, that Paprika is an added, inseminating female "spice".

But I realised, the rape scene is Osanai's dream. He's the one who's decided the Chiba/Paprika dynamic worked as a disguise/secret identity dynamic. When he says to her, "I love you as you are," it so perfectly smacks of a patronising psychopath, the arrogant bastard who thinks the "real" version of his object of desire is the one in his head, as her behaviour obviously can't be reflective the real her if it comes from somewhere outside him and his understanding.

Of course, I couldn't help being reminded of Evangelion again, particularly during the ending where giant naked people fight over Tokyo, which reminded me of End of Evangelion and the giant Rei, voiced by Megumi Hayashibara, who also voiced Paprika and Dr. Chiba. 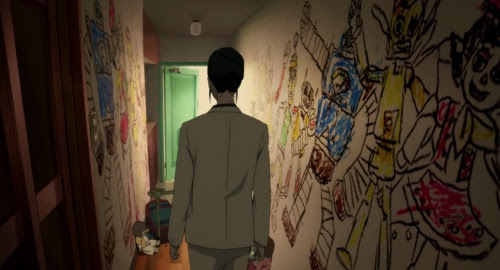 I didn't expect watching the movie to make me feel as sad as it did, as it was a movie Sonya and I talked about quite a bit. One thing the fight on Elizabeth Bear's blog gave me was confirmation that Sonya really does hate me now, enough that she was perfectly willing to hop into a chorus of petty insults aimed at me. Yet thinking back on our conversations, like the one we had about Paprika, it still seems we are of similar minds. Which makes it all the more disturbing that she hates me--I'm not sure if it's disturbing because it helps confirm the way I acted to piss her off was really wrong or in that it confirms my perception of her and our rapport was totally wrong. I suppose I'll probably never know.

I found myself reading The Annotated Alice last night, and one of Martin Gardner's notes particularly amused me in light of the Tim Burton movie. "Sometimes I've believed as many as six impossible things before breakfast," is a quote from the book that Burton used to fuel his whole movie, which was about accomplishing the supposed impossible despite what anyone says--in the Burton movie, the line's first spoken by Alice's father and becomes her motive for triumph. In the book, however, it's spoken by the White Queen when Alice says she can't believe the Queen is one hundred and one years old. Gardner provides a quote from a letter Carroll wrote to a friend;

Don't be in such a hurry to believe next time--I'll tell you why--if you set to work to believe everything, you will tire out the muscles of your mind, and then you'll be so weak you won't be able to believe the simplest true things. Only last week a friend of mine set to work to believe Jack-the-giant-killer. He managed to do it, but he was so exhausted by it that when I told him it was raining (which was true) he couldn't believe it, but rushed out into the street without his hat or umbrella, the consequence of which was his hair got seriously damp, and one curl didn't recover its right shape for nearly two days.

So, rather than a The Secret style endorsement of accomplishing things just by believing them, Carroll's argument is practically the opposite, again satirising the adult tendency to justify nonsense with nonsense. Also included in Gardner's note;

"I believe it," declared Tertullian in an oft-quoted defence of the paradoxical character of certain Christian doctrines, "because it is absurd." 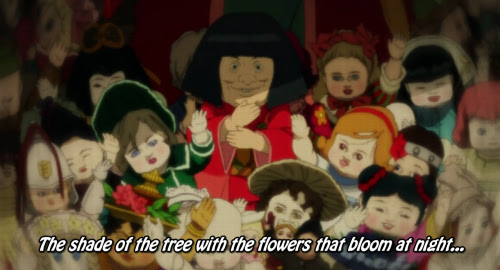