Music in the video is by Ennio Morricone from the soundtrack to John Carpenter's The Thing, which makes me exactly like Quentin Tarantino. The lens flare makes me exactly like J.J. Abrams and, like Abrams, my film probably would have been better without the lens flare. Though, I don't know, it creates tension, as in, "There's a big annoying white line through the middle of the image." If I had more time, I'd probably shoot it again.

Speaking of people who have loads of time on their hands, and also money, I got this picture yesterday of people lined up at the mall for the iPad; 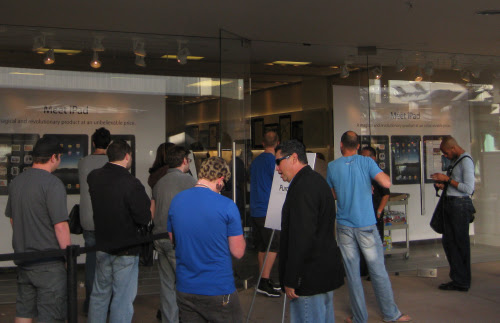 It'd be a lot of identical, out of shape rich white kids except one of them, a Mac store employee, has cheetah spots in his hair. Thundercats go, dude.

The line actually extended some ways from the Mac store, and was segmented, so when I first saw it, I didn't know what it was for. So I asked a guy in line, "What are you folks lined up for?" (I said folks I think because I was wearing my park ranger pants again).

"iPad?!" I replied automatically with a probably less than polite dubious tone.

After waking up early yesterday, I ended up sleeping almost to 3pm to-day. I woke up in the early morning and couldn't get back to sleep for a couple hours, which I realised when my alarm woke me at 2pm and I had to adjust it. I have my mp3 alarm clock set to play Jerry Goldsmith's music from Alien when everyone's waking up from hypersleep, which may have been appropriate for how shitty I felt.
Posted by Setsuled at 6:53 PM
Email ThisBlogThis!Share to TwitterShare to FacebookShare to Pinterest