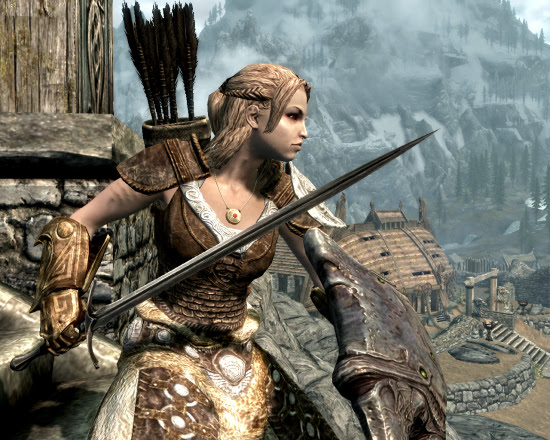 This is Brunnhilde, my latest Skyrim character, wielding Glamdring, which I got from a mod. I had to abandon Lysithea, my magic user character, when I used a master level Illusion spell on an unnamed monster and he automatically resisted it because he was of a higher level than the spell was capable of effecting. I realised then how poorly designed magic is in Skyrim, because if I then had any expectation of my character being effective she would have to train in armour and physical weapons anyway. I may go back to her if someone makes a decent mod for magic in Skyrim.

Reading Nietzsche's The Birth of Tragedy yesterday, it occurred to me that making video games is an exceptionally Apollonian endeavour while playing video games is an exceptionally Dionysian one. I thought back to my perspective on video games as art, which is that video games contain art but are usually not, in themselves, art. This is based on a perspective on that nature of art I think now I may have originally gotten from Nietzsche, who saw art as illusions created by a human mind for an audience. The reason I said video games are rarely art is that the illusions created for video games tend not to have meaningful harmony with the gaming experience. That is, even when a game has a good, well written story, or beautiful design, one can imagine appreciating these things just as well by observing them without playing the game. So the two aren't really related, in fact the two tend to sabotage each other. Changes to the gaming environment to facilitate better play usually tend to lead to less interesting art when separated from playing--like Super Mario Brothers. Changes to improve the story lead to less freedom in gameplay, or less impact the gameplay has on the story, as in the case of BioWare games. I like what I see in terms of the complexity of dialogue trees in BioWare games, but again, one can see enjoying them just as much reading them without having a character who is also levelling up in certain skills and defeating enemies in a certain way in combat. One can achieve something else by role playing their character, by creating a story for themselves and essentially treating the canned dialogue as prompts, but then you have a work of art created by the player using aspects of the game has tools. This does not make the game itself art any more than the aircraft carrier Enterprise made Star Trek IV a work of art. It's a tool that helped facilitate art.

So far the only video game I've seen that qualifies as art to me is Robot Unicorn Attack because through the act of playing the game, one receives an impression one wouldn't otherwise receive. A certain futility and hopeless optimism. It's here the Apollonian, the design of the game, meets the Dionysian, the playing of the game. It's when the two meet that Nietzsche says good art happens. I suspect that the addictive quality of video games comes from its severe polarisation of Apollonian and Dionysian--the game environment is so perfectly Apollonian, an illusion complex enough that you can interact with it, and the act of playing the game is so perfectly Dionysian--you actually have direct input on what happens. But the two aspects are spiritually disconnected, which makes video games ultimately less fulfilling than art. Not unlike addictive drugs--one is compelled to continue use because of the purely Dionysian quality and also because of the hope that the pure Dionysian will at one point connect with the purely Apollonian, a goal that is always tantalisingly out of reach.

I love this bit from the end of the section of The Birth of Tragedy I read yesterday;

While the transport of the Dionysian state, with its suspension of all the ordinary barriers of existence, lasts, it carries with it a Lethean element in which everything that has been experienced by the individual is drowned. This chasm of oblivion separates the quotidian reality from the Dionysian. But as soon as that quotidian reality enters consciousness once more it is viewed with loathing, and the consequence is an ascetic, aboulic state of mind. In this sense Dionysian man might be said to resemble Hamlet: both have looked deeply into the true nature of things, they have gained knowledge and are now loath to act. They realise that no action of theirs can work any change in the eternal condition of things, and they regard the imputation as ludicrous or debasing that they should set right the time which is out of joint. Knowledge kills action, for in order to act we require the veil of illusion; such is Hamlet's doctrine, not to be confounded with the cheap wisdom of Jack the Dreamer, who through too much reflection, as it were a surplus of possibilities, never arrives at action. What, both in the case of Hamlet and of Dionysian man, overbalances any motive leading to action, is not reflection but knowledge, the apprehension of truth and its terror. Now no comfort any longer avails, desire reaches beyond the transcendental world, beyond the gods themselves, and existence, together with its glittering reflection in the gods and an immortal Beyond, is denied. The truth once seen, man is aware everywhere of the ghastly absurdity of existence, comprehends the symbolism of Ophelia's fate and the wisdom of the wood sprite Silenus: nausea invades him.

Then, in this supreme jeopardy of will, art, that sorceress expert in healing, approaches him; only she can turn his fits of nausea into imaginations with which it is possible to live. These are on the one hand the spirit of the sublime, which subjugates terror by means of art; on the other hand the comic spirit, which releases us, through art, from the tedium of absurdity. The satyr chorus of the dithyramb was the salvation of Greek art; the threatening paroxysms I have mentioned were contained by the intermediary of those Dionysian attendants.
Posted by Setsuled at 3:11 PM
Email ThisBlogThis!Share to TwitterShare to FacebookShare to Pinterest