I kind of knew what I was getting into with River of No Return. I knew I was watching for the visuals and maybe performances and that it was otherwise going to be a flawed film. But the visuals, particularly on a widescreen television, indeed made the film worthwhile.

Visuals both in terms of the copious Alberta location shots and in terms of Marilyn Monroe. It's nice seeing one of the rare occasions where she's not playing the dumb blonde and she's given some satisfactorily sassy lines. But the plot is fuelled by how her emotions make her wrong about men and how it's up to Robert Mitchum to endure her and straighten her out.

Of all the 1950s movies I've seen, this one is the purest distillation of the uglier attitudes people associate with the period. From the moral supremacy of capitalist white men to the portrayal of Native Americans as evil incarnate.

Even so, I always enjoy Robert Mitchum's alcohol fuelled unflappability. It's only the fact that he seems half awake the whole time that keeps his character from being thoroughly obnoxious. But even that couldn't stop my stomach from turning in a scene where Mitchum seems unambiguously trying to rape Monroe.

His character, Matt Calder, had seemed to be fairly reasonable up to that point, a farmer whose livelihood had been stolen from him by Kay's (Monroe) gambler boyfriend. Then out of nowhere he attacks her--it's a long scene and it's simply ugly. Gods, it's on the poster in Wikipedia; 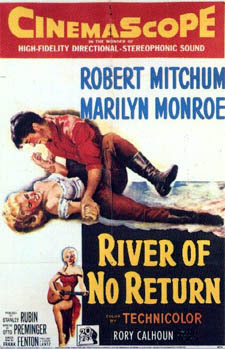 The sudden appearance of a mountain lion is the only thing that stops him, and afterwards the characters don't even seem to acknowledge what happened except for an off-hand remark from Mitchum, "Back there, I didn't mean it." Matter closed. Not that she even seemed to care, or even seemed particularly traumatised afterwards, though she was screaming, kicking, and clawing frantically during the event.

But if one ignores this (which is not the same as ignoring the issue of misogyny--I have to point this out because there are people who'd say it's the same thing), one can enjoy Otto Preminger's singular vision of Alberta, his camera capturing peculiarly blue rivers and richly coloured clouds.

There's a minimal amount of studio shots, and there are times when one can see Monroe or Mitchum is clearly piloting the raft moving on the titular river. With Monroe's stand alone musical numbers, there's valuable spectacle here.

Posted by Setsuled at 6:12 PM
Email ThisBlogThis!Share to TwitterShare to FacebookShare to Pinterest