A War is a War of Course, of Course

It's amazing how long it can take to remove the Christmas lights from a tree. It seems like it took the better part of the day.

Most of yesterday seemed like it was taken up by War Horse, one of Steven Spielberg's less remarkable, more sentimental endeavours. There were moments that wavered from cheaply precious to evocative of the inhumanity of war, but such moments were few.

It had a mostly good cast. Benedict Cumberbatch had a small role which he perfectly executed as a British cavalry officer.

But I kept looking at this guy;

I wondered why he looked so familiar. Then I realised he was the guy who played Loki rather memorably in the Thor movie, Tom Hiddleston. But even after realising this, I still kept feeling an inexplicable sensation of familiarity. Finally I realised he reminded me of this lieutenant from The Life and Death of Colonel Blimp. 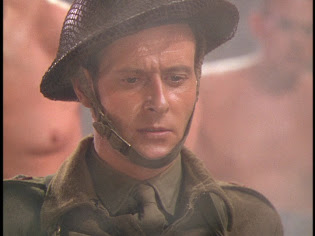 Not a dead ringer, but the same crystal eyes and old fashioned young and earnest manner. It served to remind me how remarkable a film The Life and Death of Colonel Blimp is--a British film made during World War II that paints a portrait of the humanity common to both sides of the conflict better than War Horse, a modern American film about World War I.

Part of the problem, certainly, is that the film's anchored on an animal who, despite Spielberg's considerable talents at creating visual narrative, never feels like a character. Hiddleston and Cumberbatch are in the film too briefly, and the spot of lead human is mostly filled by this dopey looking mug.

Maybe Spielberg's plan was to make the horse seem smart by comparison. Unfortunately it ends up just ensuring this feels like Thomas Kinkade: The Motion Picture.
Posted by Setsuled at 6:59 PM
Email ThisBlogThis!Share to TwitterShare to FacebookShare to Pinterest