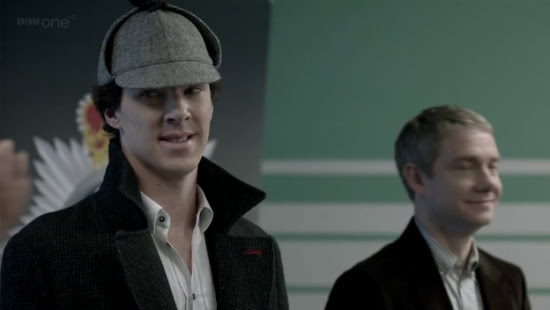 Maybe it shouldn't be a surprise that after an episode that a few critics thought similar to Batman Begins, the final episode of this season of Sherlock, "The Reichenbach Fall", should resemble The Dark Knight. The similarities are even stronger this time because they're more thematic than plot oriented. The fear toxin thing in "The Hounds of Baskerville" certainly resembled many works of fiction besides Batman Begins, but the whole idea of a hero losing his good reputation in order to defeat a brilliant villain with a peculiar lust for chaos is The Dark Knight all over.

Rather than simply calling rip off, though, I find myself inclined to examine this as a trend in superhero stories. In the original stories, there's something of the dark hero implied by the separation of Mycroft and Sherlock. There's a reason Sherlock isn't in the police force or working with the government, sometimes this is manifested in Holmes taking the law into his own hands, as in "The Adventure of the Abbey Grange". The implications of one man with so much power and philosophical autonomy are implied when Holmes broaches the subject of Moriarty to Watson by saying to Watson how terrible it might be if he, Holmes, had decided to use his powers to thwart justice rather than aid it. The dangerous hero outside the realm of law is certainly no new story, and one can apply it to many famous fictional detectives.

But the original Holmes stories never had Holmes as a fugitive, never had Moriarty as being the sort of mad agent of chaos we see in villainous characters to-day, as our thoughts on villainy are less inclined to explore material motives. "Some men just want to watch the world burn," as Michael Cain said in The Dark Knight. Holmes and Moriarty use the word "burn" a lot in order to sound badass in "The Reichenbach Fall". It made me cringe every time. 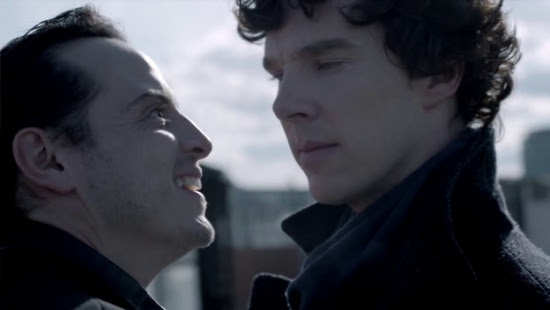 Mainly I liked the episode, though. It's certainly better than "The Hounds of Baskerville" though it doesn't hold a candle to "A Scandal in Belgravia". I wasn't really impressed by the sparring between Holmes and Moriarty. I felt like Holmes' abilities were a bit less than what they ought to have been. I certainly don't think obvious jury tampering would have the result it did in the episode, though I don't know much about the British legal system, maybe there is a hole the size of Jupiter like that.

My favourite part of the episode was Holmes' encounter with the journalist, how he completely bested her in the first encounter, and then had the tables horribly turned on him in their second meeting, even if she unknowingly was a sucker, too. 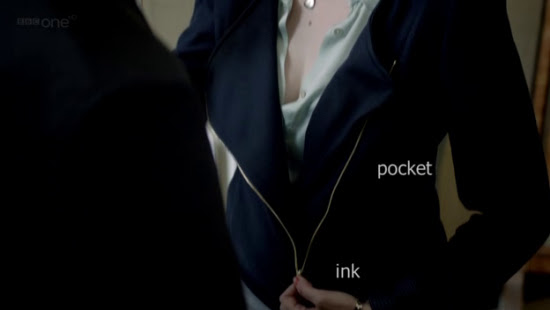 As for Holmes' "death", his means of faking and escaping aren't clearly stated in the episode. I think what happened is actually pretty obvious. I'm speculating here, though, so I guess it doesn't count as spoilers.

We had the setup with Molly without finding out what it was Holmes wanted her to do. We also never see Holmes move in this long shot from Watson's POV; 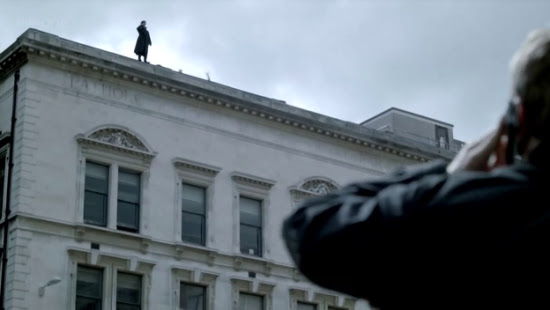 Shots showing "Holmes" on the ledge are never directly tied to close-ups of Holmes on the phone. It's obvious the body Watson sees on the sidewalk isn't Holmes--the cyclist who'd knocked Watson over was obviously meant to put Watson out of it enough to fail in identifying the body properly. I suspect the cyclist was in fact Holmes himself. Molly works somewhere where she'd have access to dead bodies. So my theory is that a corpse was made up to look like Holmes and then pushed off the ledge.

Now, we clearly see the man's arms and legs wiggling as he falls. Though this is not connected with shots of Watson, so I'm thinking this could be the real Holmes finding a quick way down from the roof of another building in order to reach the bicycle in time. I saw someone else had a theory Holmes had fallen into a laundry truck. Both of these ideas amount to rather unsatisfying tricks for a solution, but I wouldn't put them past Steve Thompson.

Of course, it's possible that by the time they make the first episode of the next season, the writer of that episode will have found the setup completely unacceptable and have come up with a totally different explanation impossible to deduce from the given facts of this episode. I do hope not. 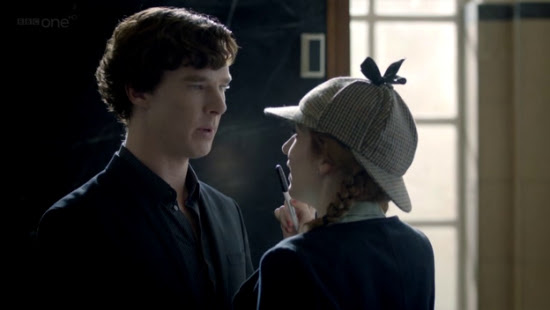