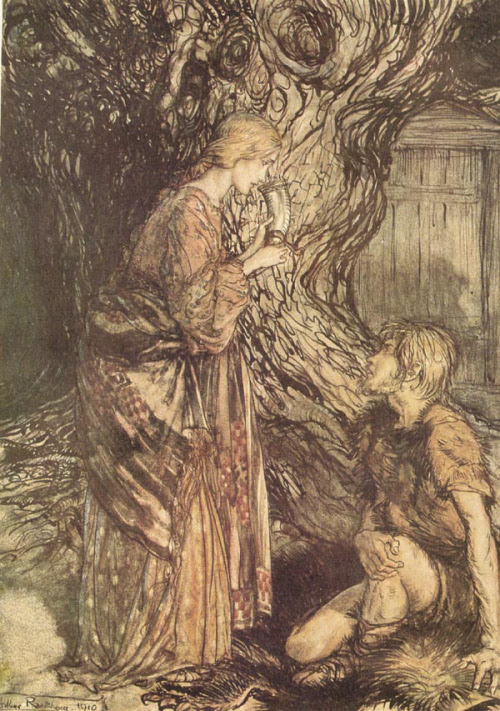 I feel like some kind of film adaptation of Der Ring des Nibelungen is imminent. I see it happening within five years. Wagner's turning up in too many movies, and it's not hard for me to imagine a studio executive saying, "So it's basically like Lord of the Rings, right?" Though I guess it would be pretty hard to make a family film out of it without radically changing the story. Then again, maybe they'd figure audiences are comfortable enough with incest from Star Wars. Yes, I can see this happening and I can see it going so horribly wrong.

What I would like to see is an anime adaptation. Maybe Studio Ghibli, since Ponyo is so filled with Die Walkure references. I would like to see a big budget anime adaptation using the actual opera--the characters would be singing--and maybe, like the Rankin Bass Hobbit, with visuals based on Arthur Rackham's work. Rackham did so many illustrations for Der Ring des Nibelungen it's practically a graphic novel. Though the copious illustrations of beautiful naked Rhinemaidens compared to the very few of Wotan kind of misrepresents the focus of the play.

I was watching a production of Die Walkure yesterday and thinking how breathtakingly cruel the first act is. It's like a sick joke. Siegmund and Sieglinde have both lead hard lives apart. When he enters her house, he says he brings woe wherever he goes, and she says how can you bring woe to where woe makes its home? Then I guess he goes and does just that.

Their duet in the final scene of the act is like a demonic parody of so many love songs. He begins talking about how Spring and Love are siblings, and then talking about how he's Spring and she's Love--before the two of them actually realise they're siblings. Before they realise they're siblings, they sing about how they see themselves in each other's faces, how they complete each other, how they're two halves of a whole like in so many love songs, poems, and stories before. But it's all stuff that applies when you consider they're twins.

The cruelty isn't just in that they're siblings who've accidentally fallen in love. It's how it happens--he has found himself going through life acting on instincts always conflicting with people around him, she was stolen as a child and forced to be wife to Hunding. The two of them have both been alone all their lives, surrounded by hostile spiritual aliens, until they finally meet each other and each finds the balm of a kindred spirit. Oy, but how kindred. See? It just naturally works into a joke, but it's so not funny.

It's kind of not surprising that the two, upon realising the truth, still decide to go with it, but you can tell it's completely unhinged them, particularly Sieglinde. It's the last straw, and now it's the two of them against all society and nature, which is given voice by Fricka in the next act. It's not like Wagner seems like he's rooting for incest, either, as I think is attested to by the frenzied quality of the end of act one and the atonal blat from the brass section when they kiss.