Compulsion to Say for Instance

I think I'm really addicted to movies. I decided last week to stop my nightly movie watching a little while to concentrate more on other things, and I swear I started feeling withdrawal symptoms. I need a movie just to feel even now. Or if I could find another television show to watch, it might help. I wish I hadn't run out of Doctor Who episodes. Last night's fix was Experiment Perilous, a 1944 Jacques Tourneur movie starring George Brent and Hedy Lamarr. It feels like someone tried to put the contents of a champagne bottle into a soda can. There are teasingly nice elements, and an even more teasing subtextual suggestions, but it's mostly obscured under a stamp of compulsory formula.

One problem easy to point to is casting. According to Wikipedia, Cary Grant was originally meant to play the male lead, Dr. Bailey. This would have improved the picture immensely, not just because Grant was a great and charismatic actor, but also because George Brent is so incredibly dull. Hedy Lamarr gets top billing, but Brent gets a lot more screen time as most of the story is told from the point of view of Dr. Bailey, who finds himself mixed up in the strange, subtly psychological dramas of a rich and powerful New York family.

Bailey really needed the charm of someone like Cary Grant as the story feels rather like the fantasy of a sensitive woman caught in a stifling and frightening domestic life. As the outsider who swoops in to be heroic, Brent is just such a disappointing bowl of oatmeal. Yet, according to Wikipedia, the guy was apparently a very active member of the IRA during the Irish War for Independence. I often think one might find an interesting ratio of how interesting people's lives are to how interesting their artwork is. 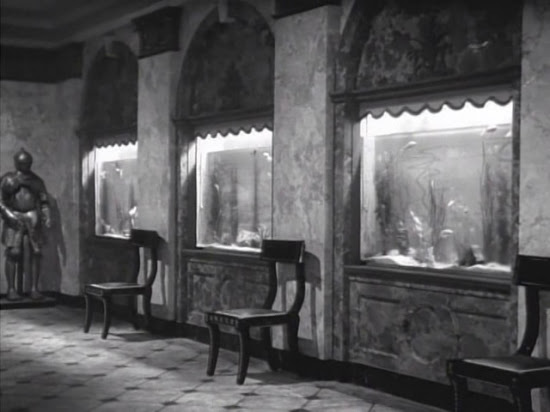 I would happily live in a house that finds harmonious decor pairing full plate armour and aquariums. The movie's beautifully shot by Tourneur, his visuals along with aspects of the story early on seemingly setting up for a tale that comments on the nature of women. A minor character, an artist, shows off his recent sculpture representing women in general; 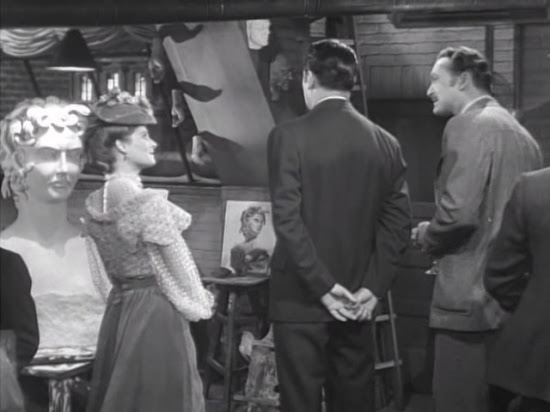 She has snakes for hair, but no-one mentions the word Gorgon or Medusa. Just women. Hedy Lamarr has relatively little screen time at first, but her character's set up like some kind of phantom goddess, as we see her first in a painting, and Bailey's breath is taken away by the painting then by the woman herself. 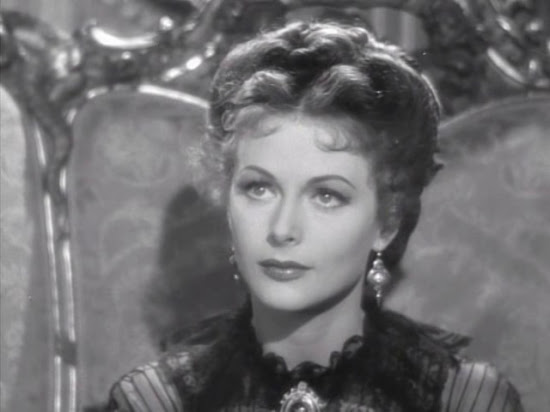 He describes her as having something in her eyes, a fatefulness.

And yet, it turns out there's not much to her. She's shown having been plucked as an innocent from a Vermont village by Nick--the villain and her eventual husband. In the centre of the movie is a long sequence showing the details of a biography about Nick written by his sister who describes him as having from a young age an inexplicably sinister quality. Here, again, casting fails the story as Paul Lukas is entirely too dull for this part. We have a man who we see behaving relatively innocently throughout the movie, yet we're supposed to believe people see something strangely wicked in him. I'd have liked perhaps Charles Boyer, Peter Lorre, Vincent Price, Conrad Veidt, or Claude Rains in the role.

Ultimately the movie ends up being about men, or about how men deal with their feelings for women. The women mainly run away, smile, or just hang out while people feel things about them. The ending has a too neat, bad guys lose and good guys win, quality that felt enforced by the studio. It's too bad, because there's a lot of really intriguing beginnings of things in this movie. 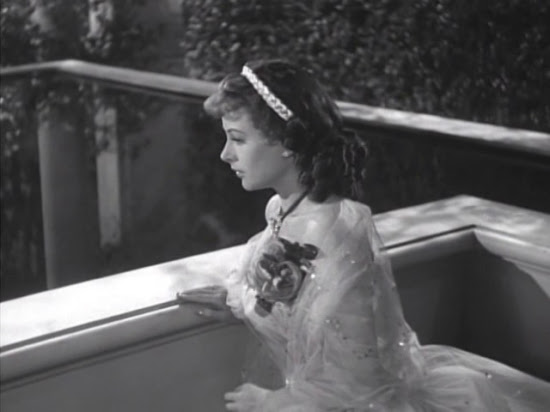 Q-tip sunrise prods the dawn's ear canal.
Provolone muscles flex under shag tent.
Anticipatory nostrils recall
Undreamed Windex for distant lovers meant.
The bald reeve dwarf took off his shirt for Cheese.
Pale slices of triumph would not be stopped.
Nor would he the enshrined Shamu appease.
And so on Saltine plains alone he walked.
Dusty dull cotton air breaks for lizards.
Leather wings whip the man over cracker.
Bulging paper snaps the tiny scissors.
Milkweed bows before dragon weed wacker.
Sunflower seeds shine in victory paste.
As the bristles grant brushes hair to taste.
Posted by Setsuled at 4:37 PM
Email ThisBlogThis!Share to TwitterShare to FacebookShare to Pinterest