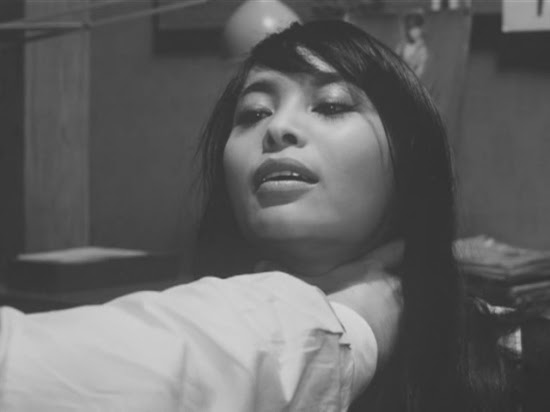 Of all the directors I would have expected to have made a movie about erotic asphyxiation, Mikio Naruse is not one of them. So it came as some surprise to me when it turned up as a central plot point of his 1966 film The Stranger Within a Woman (女の中にいる他人) without the slightest hint of self-consciousness or awkwardness. It's as though George Cukor very confidently made Blue Velvet. Naruse, whose career spanned four decades beginning early in the 1930s, was known for making absorbing, mournfully feminist "women's pictures", usually from the perspective of a female character who faces an increasingly constricting existence due to personal relationships, particularly with insensitive men, or due to financial burdens, or both. And although The Stranger Within a Woman features many of the most salient characteristics of a noir, particularly murder and tormenting guilt, it benefits also from Naruse's unmistakable knack for creating tension out of two or three people in a room worried about one another, characteristic of his films about more common domestic problems. It's one of the most quietly amazing films I've seen in some time. 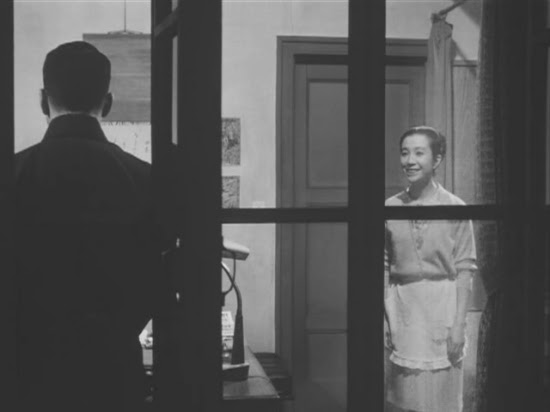 The story follows two couples who are close, old friends. Isao and Masako Tashiro are the older couple, living in Tokyo with two young children. Ryukichi and Sayuri Sugimoto are a young couple whose respective careers keep them apart much of the time. They live in Kamakura, Ryukichi commutes to Yokohama while Sayuri works for a cosmetics company in downtown Tokyo where Ryukichi reveals to an investigator she had many male friends and he's unaware of the nature of their relationships with her. We only see Sayuri in flashback--she has just been murdered when the film opens, having been found naked and strangled in the bed of a female friend. 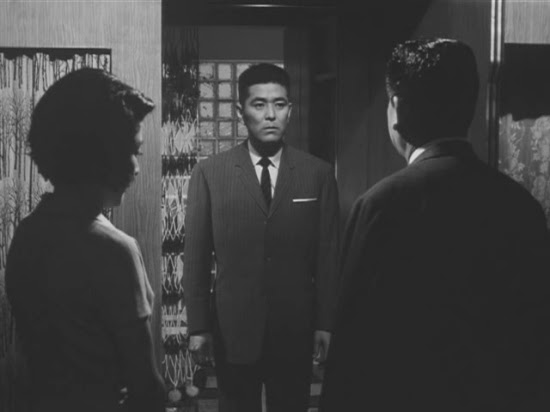 It's clear a male lover had been present from the evidence. Sayuri's friend had given her a key so that she could use the apartment for her affairs. Ryukichi seems upset but not as upset as one might expect--one senses the couple had grown apart.

Much more upset is Isao who becomes a bottle of nerves following the murder. Although the fact that he killed Sayuri isn't directly revealed until twenty minutes in, it's fairly obvious. The guilt first drives him to admit to his wife that he'd had an affair, then, after they'd made up, he finds he must unburden the full nature of his crime to her. 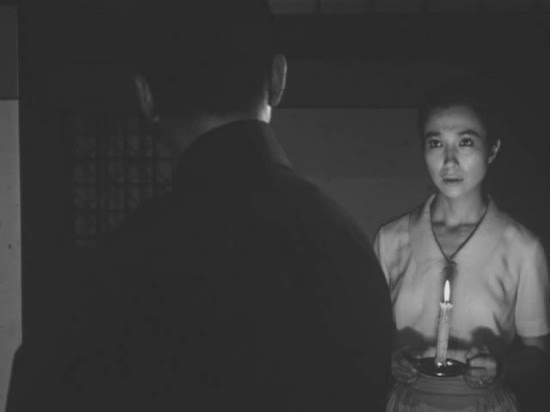 Sayuri had begged him to choke her during sex and he reluctantly complied. He'd complied on several occasions before finally accidentally killing her in the act.

So it's perhaps not strange when Masako, after an initial speechless horror, reacts by urging her husband not to turn himself in to the authorities. The real fascinating thing about the latter portion of the movie is Isao wrestling with the knowledge of what happened. Was he a murderer? Was it an accident? Is it better to turn himself in or keep it a secret for the sake of his wife and children? The movie was also marketed in the west under the title of The Thin Line and indeed the movie carries off a captivating balancing act, raising very uncomfortable questions and knowing better than to presume to present answers to them. 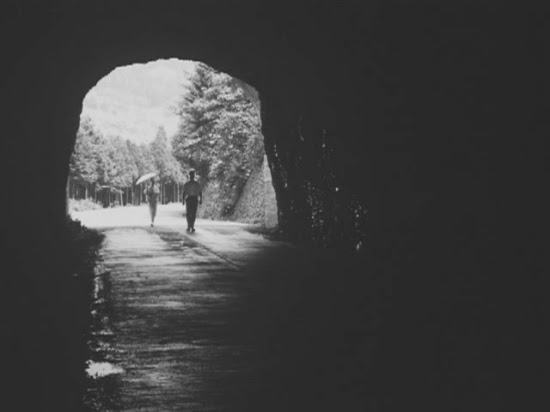 Posted by Setsuled at 2:06 PM
Email ThisBlogThis!Share to TwitterShare to FacebookShare to Pinterest