First of all, I'd like to wish Caitlin joy on the occasion of her contemplating the ambiguity of her birthday.

Last night I dreamt I was doing math homework and had just finished a word problem to which the answer was "88,888 lbs". From under the answer I moved a black pawn diagonally up and took the "lbs" so that the answer was now "88,888 (black pawn)". And to think, I only won two out of five games in the chess tournament I played in yesterday.

Before going to sleep last night, I watched a BBC production of Richard II released last year as part of a production of Shakespeare's whole Henriad called The Hollow Crown. My British Literature teacher told me he liked how Richard is performed in this production, exactly as Richard ought to be played, he felt. It ended up being Ben Whishaw, who I remembered from Cloud Atlas though I may have seen him as the newest Q in the James Bond movies. 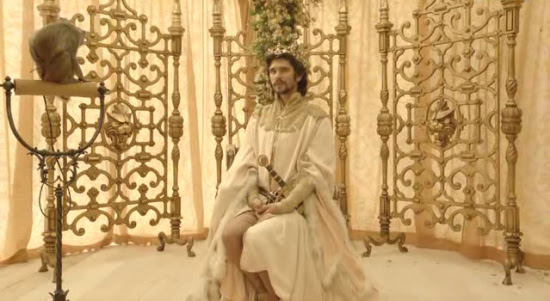 He does give a good performance, part of a generally good production. Just in terms of his youth, it's illuminating to see as part of his vanity and weak will that Shakespeare portrayed as his primary character flaws--and Richard II was indeed, in reality, only 32 when he was deposed. In The Hollow Crown production, it's hinted through performance that Richard and his closest advisor, the Duke of Aumerle, are in love, though there aren't scenes added to make this definite. Mainly it's visible in how Aumerle consoles Richard on the beach on their return from Ireland. 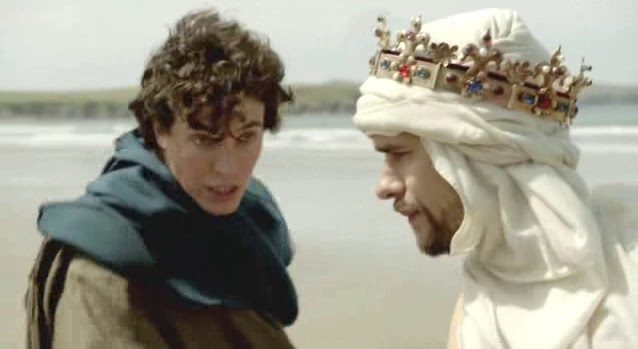 It fits in with Aumerle being chief among the flatterers who are blamed for exacerbating Richard's counterproductive narcissism. It also helps to emphasise the personal impact of the political dealings on Richard.

Whishaw plays the scene where Richard hands the crown over to Bolingbroke with the masochistic savouring appropriate to the material. As much as Richard gloried in himself as a reigning king, he wallows in his downfall with relish almost to the point of absurdity and yet he doesn't become a joke. There's enough insight in it to emphasise the tragedy. I love this bit from after Richard's broken his mirror;

Say that again.
The shadow of my sorrow! ha! let's see:
'Tis very true, my grief lies all within;
And these external manners of laments
Are merely shadows to the unseen grief
That swells with silence in the tortured soul;
There lies the substance: and I thank thee, king,
For thy great bounty, that not only givest
Me cause to wail but teachest me the way
How to lament the cause.

Patrick Stewart's also in the production as John of Gaunt and he does very well with the relatively small role. It's good to see him again in something that's not very broad comedy. He seems younger here than he has in years. Posted by Setsuled at 2:19 PM
Email ThisBlogThis!Share to TwitterShare to FacebookShare to Pinterest